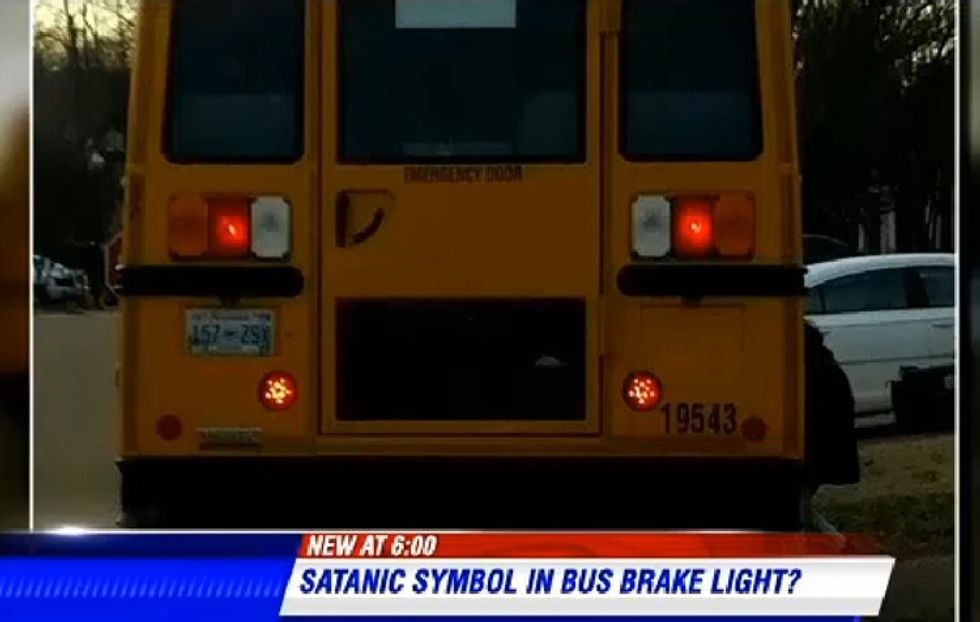 From Memphis, Tennessee, we have this important news of demon-possessed bus tail lights, thanks to easily upset Christian lady Robin Wilkins, who saw a star pattern in the LED taillights of a school bus. She decided it was a Satanic pentagram just like on a heavy metal record, and took her concerns to the local teevee station. Which aired them, of course, because why wouldn't they?

"Anyone who fears a God, if not God and Jesus Christ, should be outraged," Wilkins told the station, apparently in complete earnest. Newscaster Kontji Anthony carefully explained that a pentagram is an upside-down five-pointed star, and indulged Wilkins a little further as she speculated that this was one more sign that Christians are oppressed: "If they can't put a cross on there, you cannot put a pentagram on it!" Wilkins also asked, "Would we allow a swastika, for instance, to be on the back of the bus?” Excellent question. Let's all pray that we never have to find out!

In what had to be one of her favorite assignments of the year so far, Anthony even went to a shopping center to gauge local opinion:

When [Anthony] showed Marsha Hudson the star-shaped tail lights on the school bus and asked what she saw, she flatly replied “It’s a light.” But, then she wonders aloud:

“People should be upset if it’s against their religion et cetera.”

Anthony even found a Wiccan who said the pentagram was a sacred symbol for her, and that people need to get educated about Wicca (sure thing!):

“Find out what it really means before you start getting riled up and all worked up about something. Wiccans, we believe in God, we believe in Jesus, but we don’t call him God.”

That sounds like pretty loose Wiccan doctrine to us, frankly.

If the WMC news crew found anyone who simply said, "You've got to be kidding. You're kidding, right?," they didn't include those doubters in the story.

On the other hand, if the stars are pointed right-side up, apparently that's enough to brighten some people's day, like Holly Baker, an NBC affiliate anchor and reporter in Wisconsin:

It would appear that Ms. Wilkins is not alone in her concerns. We found at least two other random posts about the devil lights, one from 2008, and another from 2013, as well as this YouTube video by a very upset gentleman:

Should you encounter anyone freaking out over pentagram-patterned tail lights on school buses, we recommend you comfort them by directing their attention to a nearby telephone pole and telling them that Jesus has put crosses next to all the roads to counteract the devilish LEDs. Some 20 years ago, we read a letter to the editor explaining that all those cross-shaped telephone poles were proof that America is a Christian nation, and that has always reminded us that people see signs and wonders everywhere, bless their hearts.