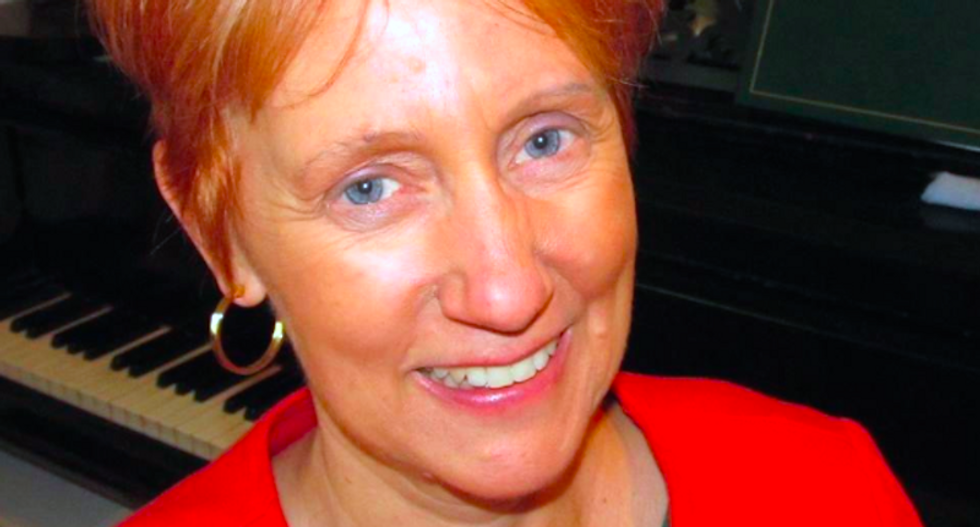 As we all know by now, Donald Trump has had pretty much no luck in securing acts to perform at his inauguration. So far, it is pretty much Ted Nugent, Kid Rock, The Rockettes, one wedding band performing as two different bands, DJ Freedom (whoever that is), The Mormon Tabernacle Choir and -- we assume -- The Aristocrats!

Last week, some Rockettes voiced their displeasure in having to dance for his Orangeness. This week? It's the Mormons!

Mormon Tabernacle Choir member Janet Chamberlin was so repulsed by the idea of the Choir performing for Donald Trump that she didn't decide to simply sit this one out, but to leave the choir entirely, after having been a member for more than five years.

In a heartfelt letter to the choir and its president, which she also published to Facebook, Chamberlin explained her reasons:

Since “the announcement”, I have spent several sleepless nights and days in turmoil and agony. I have reflected carefully on both sides of the issue, prayed a lot, talked with family and friends, and searched my soul.

I’ve tried to tell myself that by not going to the inauguration, that I would be able to stay in Choir for all the other good reasons.

I have highly valued the mission of the Choir to be good-will ambassadors for Christ, to share beautiful music and to give hope, inspiration, and comfort to others.

I’ve tried to tell myself that it will be alright and that I can continue in good conscience before God and man.

But it’s no use. I simply cannot continue with the recent turn of events. I could never look myself in the mirror again with self respect.

I love you all, and I know the goodness of your hearts, and your desire to go out there and show that we are politically neutral and share good will. That is the image Choir wishes to present and the message they desperately want to send.

I also know, looking from the outside in, it will appear that Choir is endorsing tyranny and fascism by singing for this man.

And Choir’s wonderful image and networking will be severely damaged and that many good people throughout this land and throughout the world already do and will continue to feel betrayed. I believe hereafter our message will not be believed by many that have loved us and adored what we have stood for.

I know that I too feel betrayed.

Further on in the letter, Chamberlin compared Trump's tactics to that of Hitler.

History is repeating itself; the same tactics are being used by Hitler (identify a problem, finding a scapegoat target to blame, and stirring up people with a combination of fanaticism, false promises, and fear, and gathering the funding). I plead with everyone to go back and read the books we all know on these topics and review the films produced to help us learn from these gargantuan crimes so that we will not allow them to be repeated. Evil people prosper when good people stand by and do nothing.

We must continue our love and support for the refugees and the oppressed by fighting against these great evils.

"I only know I could never 'throw roses to Hitler,'” Chamberlin concluded, "And I certainly could never sing for him." Good for her!

Chamberlin is hardly alone in her opposition to the choir performing at the inauguration. A petition created by LDS member Randall Thacker asking them to change their minds about performing has garnered 23,000 signatures.

We, as signers of this petition, believe that The Church of Jesus Christ of Latter-day Saints' decision to allow the Mormon Tabernacle Choir to perform at the upcoming presidential inauguration of Donald Trump DOES NOT reflect the values of Mormonism and does not represent its diverse 15+ million members worldwide.

We also believe that an official LDS organization performing at a presidential inauguration gives the perception that the LDS Church and its diverse 15+ million members worldwide support an incoming president's agenda, values and behaviors. Performing at other government events would not be a concern (e.g. national holidays such as July 4th).

You know, admittedly, I have not always had the best impression of the LDS Church, particularly in regards to their position on gay people, women, their previous position on black people, and also the gastronomic horror that is "frog's eye salad." However, for as much as Chamberlin and Thacker may worry that the Mormon Tabernacle Choir will ruin the perception of Mormons in the public eye, their protesting of the event is actually giving me a much better perception of the Church and its members than I had before today. I wouldn't be up for joining, so don't send anyone to my apartment, but I am certainly more aware now than I was previously that there are some pretty cool Mormons out there.

I actually have A IDEA for Janet Chamberlin and her future singing prospects. I suggest that she team up with my second favorite Mormon singer after perfect and beautiful human Gladys Knight. Is it Donny Osmond? No, it is not Donny Osmond. "Puppy Love" is a terrifying and evil song and no one should ever be subjected to it again. I feel like I have heard Marie Osmond is nice, but it is not her either. It is this Parker Cressman kid from this Mormon parody of Adele's "Hello." She should find him and then they can sing all the songs together.

I don't know what his politics are, but I am in awe of his voice and would very much like it if he were also on the Mormon Anti-Trump team. Is that too much to ask? I think not.