Nice Obamacare Subsidies You Got Here, Shame If Trump Were To Drown, Arson, And Decapitate Them 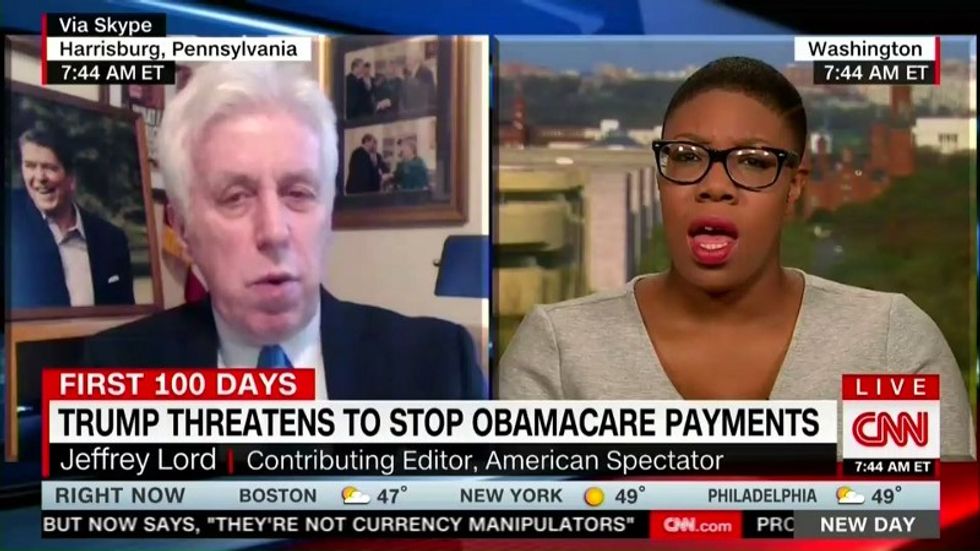 Donald Trump has a dream. Although his plan to repeal the ACA failed, he hasn't given up yet on his plan to take healthcare away from millions of people across the United States. But rather than try to convince other Republicans that his plan is evil enough for them, he's decided to try to convince Democrats to get on board. Not by giving them anything they want, but by threatening to sabotage Obamacare (again) by taking away billions of dollars in subsidies that go to help low-income families obtain healthcare.

He explained this in an interview with The Wall Street Journal published Wednesday:

“Obamacare is dead next month if it doesn’t get that money. I haven’t made my viewpoint clear yet. I don’t want people to get hurt.”

Evidently, Trump is taking a Bonnie and Clyde approach to government: 'Give me what I want, and no one gets hurt. At least until I get what I want. Which is, actually, a lot of people getting hurt.'

Basically, he is trying to leverage the fact that Democrats don't want poor people to die, in order to achieve his dream of getting to see poor people die. Nice!

In a CNN discussion on this new policy, Jeffrey Lord -- Trump's most loyal defender -- tried to explain to host Alisyn Camerota and guest Symone Sanders, a known black woman, that Trump was basically being the Martin Luther King of health care now.

CAMEROTA: Jeffrey, what about that, that it does scare people when they hear it? Even if it is just a negotiating tactic, it scares people.

JEFFREY LORD: Alisyn, I want to say something here that I know will probably drive Symone crazy. But think of President Trump as the Martin Luther King of health care.

LORD: When I was a kid, President Kennedy did not want to introduce the civil rights bill because he said it wasn't popular, he didn't have the votes for it, et cetera. Dr. King kept putting people in the streets in harm's way to put the pressure on so that the bill would be introduced. That's what finally worked.

SANDERS: Jeffrey, you do understand that Dr. King was marching for civil rights because people that looked like me were being beaten. Dogs were being sicked on them. Basic human rights were being withheld from these people merely because the color of their skin. So let's not equate Dr. Martin Luther King Jr., a humanitarian and Nobel Peace Prize winner, to the vagina-grabbing President Donald Trump.

In a 1966 speech to the Second National Convention of the Medical Committee for Human Rights, Dr. King said:

"Of all the forms of inequality, injustice in health is the most shocking and the most inhumane because it often results in physical death."

He then called for direct action and creative non-violence to address the "segregated and inferior" medical care black people were receiving in the United States. Given that statement and the fact that he advocated a Universal Basic Income for all citizens, I think it is pretty fair to say that he probably would not have been so keen on Trump's plans -- such as they are -- for healthcare in this country.

Second, Dr. King did not put "people in the streets in harm's way" to achieve aims they did not want, against their will. That was not a thing. Also, he didn't put them in harm's way, the police did. And I highly doubt the police were trying to get the Civil Rights Act passed. Essentially, Trump is taking healthcare away from poor people in order to achieve his dream of taking healthcare away from poor people.