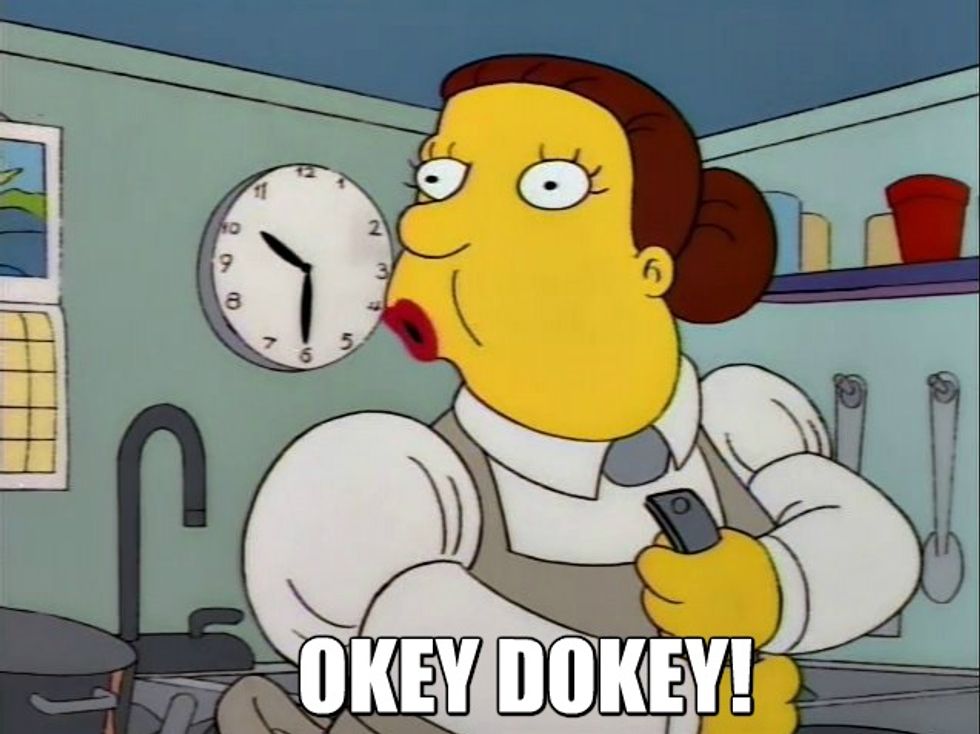 Then feed those kiddos, woman!

The Houston Independent School District announced some fine news Wednesday: Once the public schools are dried out and back in session, parents won't have to worry about lunch fees for the 2017-2018 school year. The school will provide free meals to all students who want them, up to three a day, thanks to a waiver from the US Department of Agriculture granting emergency approval for all the district's families, under the National School Lunch/Breakfast Program.

The school district is still asking parents to complete the applications online, however, to ensure adequate funding and to track student data.

“The flooding that is affecting the city of Houston has been devastating to so many. Some of the areas that are the hardest hit are filled with working parents whose limited funds will need to go toward recovery efforts,” said Houston ISD Superintendent Richard Carranza. “This waiver will give our families one less concern as they begin the process of restoring their lives. It will also provide a sense of normalcy by allowing students to have access to up to three nutritious meals each and every school day.”

While some Houston schools have been flooded, others have been serving as shelters for people in the community. It's not yet certain when all the schools will be able to reopen, according to superintendent Carranza. Every effort will be made to help kids get back to something like a normal-ish school year, even if their families have had to evacuate to other parts of the city:

"In no way, shape or form do I feel this is going to be a lost year," says Carranza. "I have every expectation that, you know, we'll look back at the end of the school year and just be tremendously proud of how our city came together, how the nation came to wrap its arms around Houston."

The biggest challenge isn't necessarily the school facilities themselves; it's making sure the roads and other infrastructure are restored to handle the 200,000 students in the district's 280 schools. District crews have begun assessing damage; by Tuesday, they'd made it to 75 school campuses, sometimes having to get there by boat. Roughly half had some kind of damage -- sometimes just minor leaks, but some schools had several feet of water in them.

If we were in third grade, we would insist the schools be kept flooded year round so we could go from class to class in an inflatable raft. Don't go talking to us about polluted filthy water and structural danger and mold and inaccessibility, we are thinking like an eight-year-old here and it would be fun! Until our feet got too pruney.

The other challenge for getting the schools back in service, of course, is the personnel -- a lot of teachers and staff have evacuated and may have lost their homes, so there may be a lot of shuffling. Carranza said a preliminary decision on when schools could open would be made late this week. He's also been getting advice from administrators of schools that have dealt with similar disasters, and says the goal will be flexibility: Some schools may have to merge student populations if buildings are unavailable, and if large numbers of families are still living in shelters, then buses will go to the shelters.

Carranza, who is starting in his second year as superintendent, says the district is

aggressively trying to communicate with its students and staff over social media and the website, in both English and Spanish [...]

And the kids are going to get fed. In the HISD press release on the free meals, Nutrition Services Officer Betti Wiggins (is that a Head Lunch Lady name? It is!) said,

We want to reduce any stress connected to food while families work toward getting their personal affairs in order. All HISD students will have access to good food, made with as many local and fresh ingredients as possible and served with love and a smile.

At the risk of sounding like damn Pollyanna optimists, we're betting there'll be no shortage of volunteers to help the schools get back to doing school stuff. If you want a signal that people are already in a rush to help, we'd note that the Houston ISD Foundation's "Donate" page is currently overwhelmed. Give them a little time to sort that out, and come back. And the district's Twitter feed is full of news of people raising money and donating supplies (disaster tip #1: Unless you have a whole school ready to donate, always give money!)

Yr Wonkette is supported by reader donations. If you want to give to Houston, go for it, then when you can, click our "Donate" linky.