Nice Time! Refugee Rescue Group Comes To Aid Of Sea-Nazis After Their Hitlerboat Breaks Down 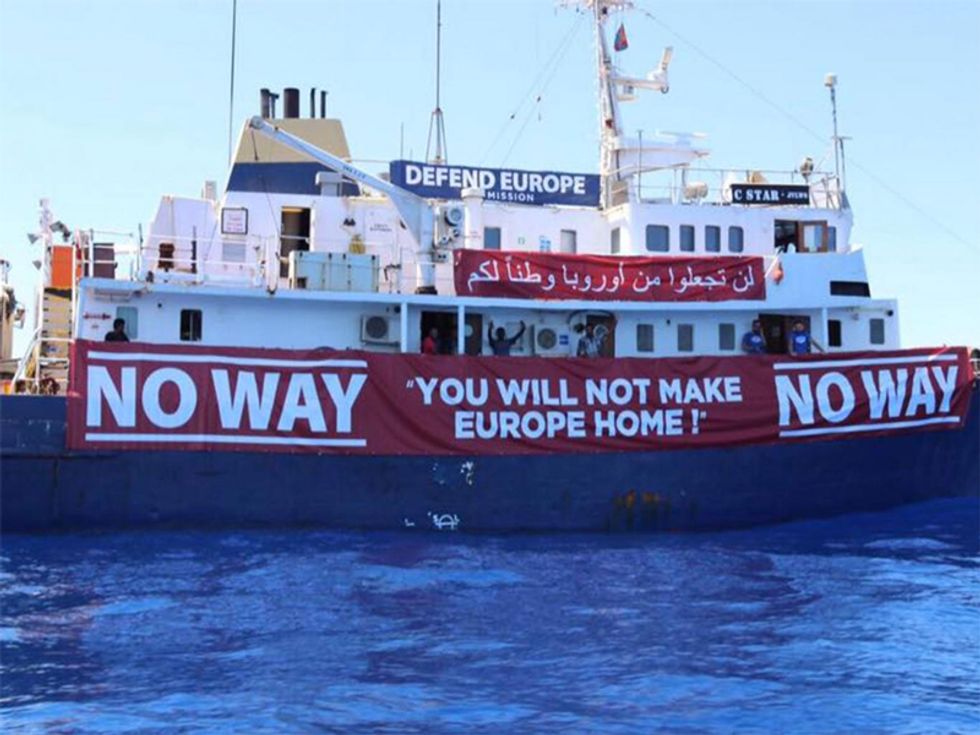 The C-Star, bedecked with its refugee-intimidating banners.

A trouble-plagued ship run by a bunch of far-right YouTube loonies (for the purpose of blocking refugee boats from crossing the Mediterranean into Europe) broke down off the coast of Libya Friday, and was offered assistance by another boat from a group whose mission is to rescue refugees in distress. Just your basic Good Seamanship kind of thing, said the head of the refugee-friendly group Sea-Eye. Because rescuing people in crappy old boats is what they're good at, after all.

The bad ship C-Star, operated by a group calling itself "Defend Europe" (and also "Generation Identity," depending on the source you're reading -- it's connected with a white-supremacist movement calling itself "Identitarianism"), got into some kind of mechanical difficulty and couldn't maneuver. Italian maritime officials contacted Sea-Eye because its boat was closest to the reichwing ship. The chairman of Sea-Eye, Michael Buschheuer, said its vessel was prepared to go help the Nazis, because “To help a ship in distress is the duty of anyone at sea, without regard for their origin, race, religion or beliefs."

The C-Star may have been unable to move, but it certainly wasn't becalmed; while the Sea-Eye ship offered to assist it, the Nazis aboard Boaty McHitlerface refused to accept any help. It's not clear whether the would-be rescuers' filthy sentimental attachment to saving drowning refugees played a role in the C-Star crew's insistence that it was fine, just fine.

“Sea-Eye took on a course towards the C-Star and got in contact with the right-wing extremists but they refused any help,” a spokesperson said.

“On the instructions of the Maritime Rescue Coordination Centre [in Rome], the Sea-Eye continued its search for shipwrecks and drownings.”

The nautical Nazis confirmed to authorities their vessel had experienced a "minor technical problem during the night," so they'd shut down the engine to fix it. Their statement said they'd only contacted maritime authorities to comply with the letter of the law:

This means that under [maritime laws to prevent collisions] the vessel is considered "not under command" and information was sent out to vessels nearby in accordance with regulations.

This problem is about to be resolved.

Everything was just fine. Just a minor weapons discharge in cellblock THX-1138. No need to send help, everything's fine. They're fine. How are you?

Sea-Eye later posted a photo of C-Star;we're not sure whether it was up and running again or still drifting. Doesn't look like it has a bow wave. At the very least, it's safe to say these folks have lost their moorings and are not on an even keel.

Sea-Eye is one of several refugee-aid agencies previously denounced by Defend Europe when it was crowdfunding donations to charter the C-Star, vowing that the ship would block both refugee rafts and target "criminal NGOs… that are nothing less than part of the international human trafficking ring." Because rescuing drowning people and taking them to safety where some people want them sure is some human trafficking. The Nautzees have had no end of trouble on their Voyages of the Damned Fools; the organizers escalated to renting a ship after a February incident in which they shot flares from a small boat at a humanitarian rescue ship operated by the charity SOS Méditerranée and Doctors Without Borders, after which the Boatnichts were arrested by Italian authorities, giving them just the publicity they wanted to raise money for the C-Star charter.

The ship was held by Cyprus authorities and released after the group insisted several Sri Lankans aboard were not being smuggled, but were "apprentice crew members" who would be debarking in Egypt. NGOs have warned that if the C-Star actually blocks rescues of refugees, it could endanger lives and break maritime law, but Defend Europe now says it only intends to "monitor" NGO ships, and will rescue, not harass, any refugees it finds in distress. Nonetheless, the merde-iners aboard C-Star have reportedly tried to troll ships operated by NGOs, shouting at them over megaphones and in at least one case "ordering" a Spanish rescue ship to leave a search and rescue area.

As for any rescue operations it might hypothetically conduct, Robert Timm, one of the German ship-heads, told the Independent that while they'd definitely help any refugees in distress, they would take them to African, not European ports, although the port he named, Tunis, hasn't actually agreed to that plan.

In closing, here's a German cartoon someone posted to the Sea-Eye Facebook thread:

Loose translation: "Looks like the Identitarians' ship has sunk." Works for us: Their ideology certainly doesn't hold water, and the only part of the ship where they really belong is the poop.

And on that pun, it's your OPEN THREAD!