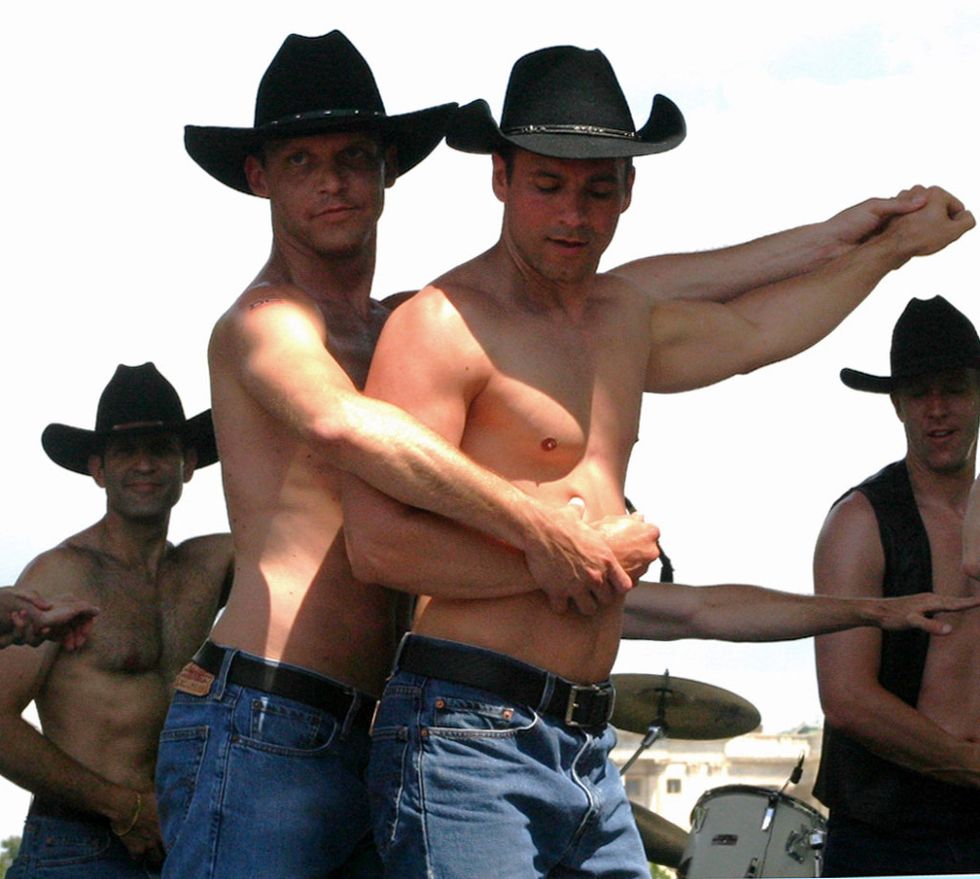 If everything is bigger in Texas, then we can’t wait to attend a big ol’ Texas-sized Gay Wedding. And pretty soon that could happen, per the NYT:

A federal judge in Texas struck down the state’s ban on same-sex marriage on Wednesday, ruling that the laws restricting marriage to a man and a woman violated the United States Constitution and handing gay-rights advocates a major legal victory in one of the nation’s biggest and most conservative states.

Given that Texas joins the likes of Utah, Virginia, Oklahoma, and New Mexico in overturning anti-gay marriage statutes, this is almost becoming a ‘dog bites man’ story. In any case, we hope that there were all sorts of unnatural celebrations culminating in gayed up reverse cowboy positions all over the Lone Star State.

Now don’t get too excited and prematurely blow your excitement-wad. There will be no gay weddings anytime soon, because the judge ordered a stay while the Fifth Circuit Court takes up the appeal. However, the judge’s reasoning was kinda awesome:

“Without a rational relation to a legitimate governmental purpose, state-imposed inequality can find no refuge in our United States Constitution,” wrote Judge Orlando L. Garcia of United States District Court for the Western District of Texas, in San Antonio.

So the next time you face a homophobic bigot who wants to deny gay marriage, you now have the legal authority to write them off as irrational. As if you really needed that authority to tell them to go fuck themselves with a rusty tire iron, but both would be appropriate responses.

As you can imagine, the reactionary right rushed out with press releases:

“The 10th Amendment guarantees Texas voters the freedom to make these decisions, and this is yet another attempt to achieve via the courts what couldn’t be achieved at the ballot box,” Gov. Rick Perry said in a statement.

Wahhhh, cried the little whiny titty-babbies. The court should only overturn laws passed by Democrats, like Obamacare, right? It’s like the federal government thinks it can just straight up stop states from treating citizens different based on gender skin color who they love! Holy hell, its not like just 60 years ago states were trying to deny interracial marriage based on the principles that it was against the Word of God before the Courts stepped up and radically changed the definition of marriage to the point where today most people don’t give two fucks about interracial marriage, because that would be crazy! There is no way that could possibly be a parallel to this situation, because that might make some folks feel like total bigots, which would be 110% accurate.

Current Texas Attorney General Greg Abbott is running for Texas Governor. As a Republican, he is of course outraged and pledged to fight for the right to discriminate. Wonkette hero and perpetual state legislature lady-crush Wendy Davis once again set our hearts fluttering:

“I believe that all Texans who love one another and are committed to spending their lives together should be allowed to marry,” Davis said in a statement.

We love her. Like for reals love her. In fact, our wonket attorney is looking in to the legality of a mommyblog gay marrying a state legislator.

However, this is the latest in a string of rulings clearly meant to stick our collective liberal dick in the Eye of God:

Todd Staples, a former Republican lawmaker who is now running for lieutenant governor, remarked on Twitter recently: “I will change my definition of marriage when God changes his.”

Staples may want to do some research on this issue. There are plenty of examples in the Bible about men with multiple wives, which would blow a polygamy-sized hole in the whole ‘one man, one woman’ idea of marriage. Perhaps God's thoughts on marriage are evolving.

Congrats to all our LBGTQMORELETTERS friends in Texas, and we look forward to beautiful pictures from the goat-marrying-lime-tree weddings!

* There was an erroneous AP tweet about Kentucky legalizing gay marriage. In fact, there was a court case forcing Kentucky to recognize gay marriages from out of state, and the state is requesting a delay in implementing it in order to decide if they want to appeal.

Follow DDM on Twitter (@Wonksplainer), where he regularly marries apple trees to orange trees just to fuck with nature.