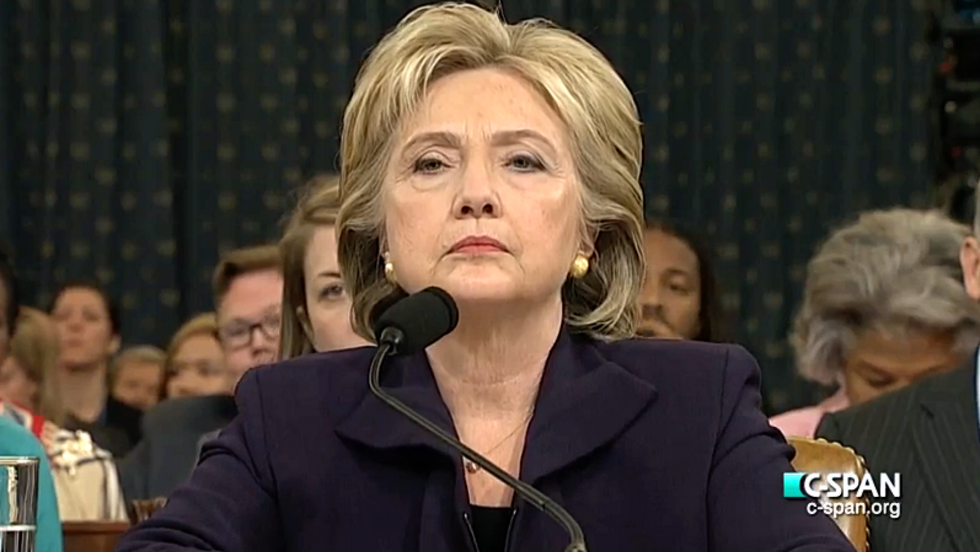 Still processing Night One of the Republican National Convention in the Cleve? The shrieking and the wailing? The general unhingedness? The repetition of lies that were debunked (and then repeated, naturally) by the Republican members of the House? The embrace of blood and war and death and torture and shitcanning the Geneva Convention? The normalization of one party calling for its opponent to be imprisoned before the election?

Let's start with that last one, because while "Melania Trump stole Michelle Obama's bicycle" will become the number one story from "Keep America Safe Again Night" (and it's a fun story!), it really wouldn't do to elide all the actual psychosis we witnessed, together, last night.

Over the weekend we watched the failed coup in Turkey. President Recep Erdogan, by recent accounts, has become a Nixonian, paranoid figure, jailing his opponents and journalists and cracking down on protesters (and the Kurds). On the Twitter machine, a lot of our rightwing friends were upset with President Barack Obama for not aiding the military coup. Erdogan is a tyrant. Barack Obama is a tyrant. And yet it's only one party calling for a political opponent to be jailed in our country today, and that party -- try to contain your shock -- is the GOP.

Speaker after speaker led chants of "LOCK HER UP" or yelled the Alex Jones-favored "HILLARY FOR PRISON" while the assorted delegates bayed at the goddamn moon.

Patricia Smith will be forever known as "Benghazi Mom." She wept and screamed. The crowd wept with her. After four years her pain has not abated enough to speak of her son without shrieking. It was heartbreaking. And it was obscene. It's not inherently wrong to put someone grieving on the stage -- I believe the DNC has a few Black Lives Matter moms ready to deploy. But let's speak plainly, as we declined to do last night, because we don't like to call grieving people crazy: Pat Smith was insane. She was insane with her grief. She is in no position to be trotted out for someone's poll numbers. The exploitation was shocking.

And here is what she said:

My name is Patricia Smith. My son Sean was one of four brave Americans killed during the 2012 terrorist attack at Benghazi. Sean was a wonderful son and father to my two amazing grandchildren, Samantha and Nathan, now 10 and 11.

He was proud to serve his country with the United States foreign service.

The last time I talked to Sean, the night before the terrorist attack, he told me, ‘Mom, I am going to die.’ All security had been pulled from the embassy, he explained. And when he asked why, he never received a response. Nobody listened. Nobody seemed to care. The very next day, he was murdered by radical Islamic terrorists.That night, we lost sons, brothers, fathers and husbands. We lost four brave Americans, who made the ultimate sacrifice for the country they chose to serve. And the American people lost the truth. For all of this loss, for all of this grief, for all of the citizens and the tragedy of Benghazi has brought upon America, I blame Hillary Clinton! I blame Hillary Clinton personally for the death of my son. Personally!

In an email to her daughter shortly after the attack, Hillary Clinton blamed it on terrorism. But when I saw Hillary Clinton at Sean’s coffin ceremony two days later, she looked me squarely in the eye and told me a video was responsible. [If you refuse to watch the video, which is advisable, "a video" was spoken with lava-hot RAGE.]

Since then, I have repeatedly asked Hillary Clinton to explain to me the real reason why my son is dead. I’m still waiting.

Whenever I call the state department, no one would speak to me, because they say I am not a member of the immediate family.

Sean is my son.

Donald Trump is everything Hillary Clinton is not. He is blunt, direct and strong. He speaks his mind and his heart. And when it comes to the threat posed by radical Islamic terrorism, he will not hesitate to kill the terrorists who threaten American lives. He will make America stronger, not weaker.

This entire campaign comes down to a single question: If Hillary Clinton can’t give us the truth, why should we give her the presidency?

[Audience member yells something, probably Hillary for Prison] That’s right: HILLARY FOR PRISON. She deserves to be in STRIPES.

What have they told Pat Smith? Who has been calling her up for the past four years, holding her hand and stoking her rage at Clinton's evil machinations in pulling the Embassy security so Pat Smith's son could die? Why is the Right so insistent that "a video" is the greatest lie that's ever been told? The New York Times found the Benghazi attack was spurred (in part) by the anti-Mohammed video Innocence of Muslims. Why would saying so become a reason Hillary Clinton should serve her country from jail? (The answer to that last one is easy: it must not have been the anti-Islam video, because then their crazy pastors and others might bear some sort of culpability. Offense offense offense.)

Most importantly, no security had been pulled from the building. Who told Pat Smith that? What kind of person whispered that in the ear of a heartstricken mother? Who DOES that?

My mother said it was "effective" as we spoke on the phone last night, sharing our horror at the proceedings. "Because she did do a terrible job in Benghazi." My mother does not care for Hillary Clinton, though she's trying to come around. Does she just watch too much goddamn "Morning Joe," or is my mother speaking for a very loud majority? We'll find out, I guess.

There were other terrible parts of the proceedings last night: the lineup of speakers suggesting that somehow only Mexican nationals kill people in drunk driving collisions; a man, Marcus Luttrell, who seemed to be suffering a breakdown from PTSD -- or, it's certainly possible, something more powdery -- right there on the screen.

And it went on and on and on. The Hilarious Benghazi Brothers -- quickly dubbed Derek and Hansel on Twitter -- went so long with their standup set that Joni Ernst and "Commander" Ryan Zinke had to share the night's final speaking slot long past primetime. And each speaker was more odious, racist, insane, fascist and unhinged than the last. (Ernst and Zinke weren't fascist per se, just boring, but by then I wasn't particularly listening, as my head was splitting from the rage bender I'd been witnessing the past four hours.)

I'm still processing it all. I am disquieted. And we get to do it tonight all over again.