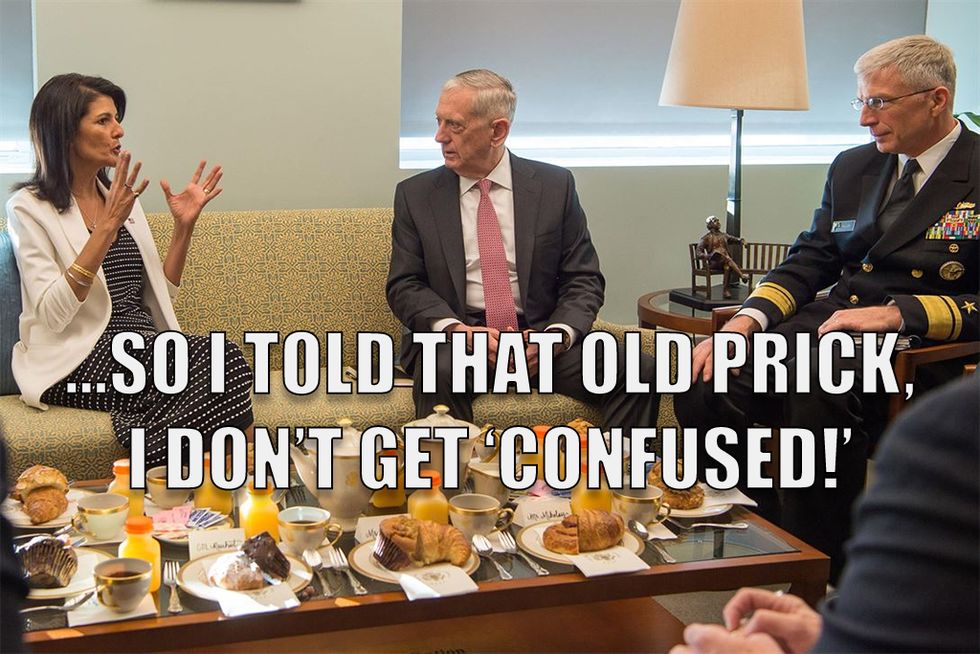 During a trade meeting with Japanese Prime Minister Shinzo Abe at Mar-a-Lago, Trump noted that the US has been engaged in high level talks with North Korea. Last night WaPo reported that CIA Director Mike Pompeo flew to North Korea and spoke with nuclear-powered slave owner Kim Jong Un over Easter. Trump also notes we're currently at war with North Korea, and that a lot of people don't know that. (#ProTip:It's called a cease fire, and a lot of people know that.)

Nikki Haley was thrown under the bus by the Trump administration after announcing additional Russian sanctions at a meeting of the UN security council. Trump's economic advisory idiot Larry Kudlow called her "confused" during a press gaggle, to which Haley clapped back in a press release stating, "I don't get confused." Kudlow backed down. She wasn't confused, they just forgot to tell her!

Trump's foreign policy team is effectively useless as he governs on emotional whims. This is fine...

ProPublica has an interesting deep dive into all of Michael Cohen's shady businesses, and how his rivals always seem to meet unfortunate ends.

Josh Marshall over at TPM has started connecting dots between Michael Cohen and the Russian mob via Cohen's late uncle and his New York club. IT'S ALL CONNECTED!

Ultimately it was James Comey who got Andy McCabe "You're Fired" after he signed off on an investigation into who told the the WSJ that the FBI was poking around the Clinton Foundation.

Here's an interesting profile on Solicitor General Noel Francisco, the man who could ultimately end up You're Fired-ing Robert Mueller.

Republicans want to use the Congressional Review Act to strike a regulatory ruling that could become a windfall for killing regulatory actions as far back as the Clinton administration.

Trump has changed his mind (again) and has decided that the US won't join the TPP now that all the other signatories have told Uncle Sam to eat a bowl of imported shit.

Mitch McConnell tepidly poked his head out from his shell to note his disapproval of Trump You're Fired-ing Robert Mueller, but also opposes bringing a Mueller Protection bill to the floor as he might actually have to do some fucking work.

The House's lamest duck Paul Ryan wants to make the "temporary" Trump tax cuts (for super-rich and corporations) permanent. Now the NRCC is begging Republicans to keep talking about their poor-fucking endeavors ahead of the midterms since they've literally nothing else to run on.

Trump doesn't want to lose his ability to indiscriminately bomb "shithole" countries, so his White House has said the current AUMF is "sufficient."

Blake Farenthold suddenly left Congress after getting tipped off that the House Ethics Committee would have named him the most unfuckably ugly myisognist on Capitol Hill. So what's Charlie Dent's excuse?

GOOD NEWS: You have another day to file your taxes since the IRS E-File website crashed thanks to years of Republican budget fuckery and incompetence. That's not our opinion, that's per the testimony of IRS deputy commissioner for operations support Jeffrey Tribiano, and former IRS commissioner John Koskinen. WE WERE WARNED!

Don't bother looking for his tax returns this year, Trump filed for an extension.

By keeping his head down, Mike Pence has strategically positioned himself to take the reins if/when Trump is "You're Fired." For a man so militantly homophobic, Mike Pence sure knows how to suck a dick.

Former Democratic Senator Patrick Kennedy is the best friend of big pharma companies pushing opioids to the tune of millions.

The Koch Brothers will launch new ads aimed at jumpstarting the debate over DREAMers, prompting a spokesman for Chuck Schumer to comment, "Wake me up when they stop spending hundreds of millions of dollars to elect Republicans that vote against the Dreamers."

Things got heated during a candidate forum in Allentown, PA, after Rep. Charlie Dent suddenly announcement his retirement; now Democrats are trying to figure out just how big and blue their balls can get in the new Pennsylvania 7th.

Here's some fancy infographics about how first-time Democratic candidates are flooding primaries across the country. Welcome, everyone, welcome to the party!

Missouri Republican Gov. Eric Greitens is refusing to step down over ALLEGATIONS he invaded the privates of his mistress, and is instead accusing Republican Senate hopeful and current AG Josh Hawley of being a damn dirty liberal minion of George Soros. This comes as Hawley accuses Greitens of funny money business with his donor list.

A Miami family is pleading for the release of a Guatemalan relative with Down syndrome who has been snatched up by ICE. This story is very sad. :(

One of the broadband advisors to piece of shit FCC Chairman Ajit Pai has been arrested on fraud charges for forging contracts and defrauding investors. You know what they say about the company you keep...

FCC Commissioner Mignon Clyburn will step down, and we are very sad because she is AMAZE-BALLS!

Instead of attending the White House Correspondents Dinner and acting like an adult, Trump will fuck off to Michigan for a campaign rally.

OMG OMG MOAR rare puppers of the Senate! They are good boys and grilz!

Our George Soros checks keep getting lost in the mail, so we need your help to keep coffee in the pot and sammiches in our tummies!