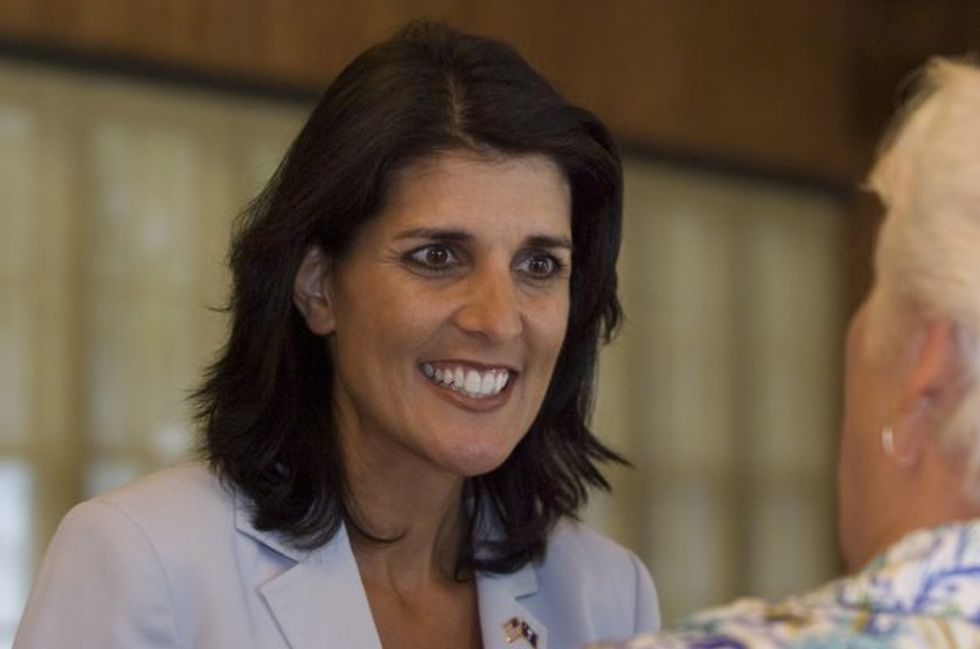 That smile is unnatural, is what it is.

South Carolina Gov. Nikki Haley would just like America's The Blacks to settle down and stop making such a big fuss over the occasional unfortunate shootings of black people by white cops, because if they protest such shootings, the cops will stop protecting them or something. In a speech at the National Press Club Wednesday, Haley slammed the Black Lives Matter movement and called for The Blacks to stop saying mean things about police, and instead, get along with white people like The Good Blacks did in South Carolina after a North Charleston cop shot Walter Scott in the back, and after the racist murders at Charleston's Emanuel AME Church.

You see, instead of black people protesting and saying that their lives matter, blacks in South Carolina were far more well-behaved, Haley explained:

“Black lives do matter, and they have been disgracefully jeopardized by the movement that has laid waste to Ferguson and Baltimore,” Haley said of the social justice group that has spread around the country in the last year. “Most of the people who now live in terror because local police are too intimidated to do their jobs are black.”

Not to excuse vandalism or anything, but we'd note that neither Ferguson nor Baltimore were "laid waste," and that the violence in Baltimore was mostly limited to a single night, thanks to calm policing and crowd management, as well as engagement with community leaders. In contrast to the imagined hellscapes of Ferguson and Baltimore, Haley praised how nice everyone in South Carolina was in the wake of the killings there:

What we saw in the extraordinary reaction to Charleston was people of all races coming together [...]

You know what else you had? In North Charleston, you had an immediate arrest of a killer cop, not days or weeks of noncommunication and victim-blaming from officialdom. And in the case of Emanuel AME, you had a suspect in custody the day after the murders, and even then, even with his direct statements about wanting to start a race war, you had vast swaths of the conservasphere explaining that there was nothing especially racist about the killer's motives.

As to the idea that there weren't any Black Lives Matter demonstrations following the murder of Walter Scott, we'd just like to remind Gov. Haley that, yes, there were indeed demonstrations, and they included that phrase she thinks is an inevitable trigger for violence:

And yes, it's quite easy to find the same slogan on signs carried by marchers following the murders at Mother Emanuel too. Why, it's almost as if Nikki Haley were cherry-picking two incidents where violence broke out as a way to smear all protests against police violence. Surely she wouldn't stoop to implying a false dichotomy, would she?

Yes, people did come together to call for healing following the murders at Mother Emanuel -- but that doesn't negate the fact that there was one hell of a wound.