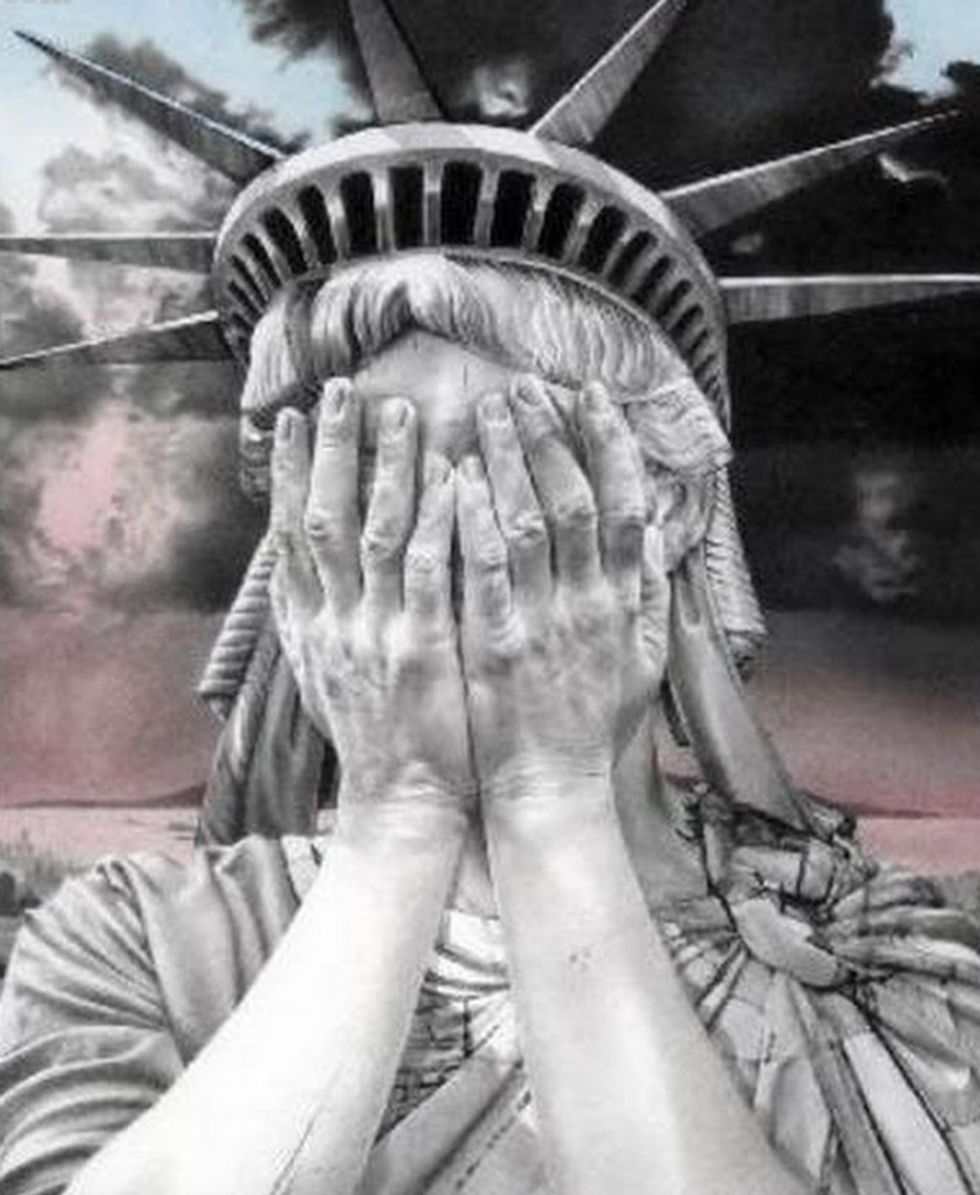 This is what happens when your president is an ignorant liar. Every day, we hear a few more stitches rip as the seams of our democracy give way under the pressure of our bloated Bullshitter in Chief. And the legal analysis over these Executive Orders can be boiled down to one real issue: Judges think our president is full of shit.

Last month, Jeff Sessions was shocked that a federal judge in Hawaii had the nerve to weigh in on Trump's Muslim Ban 2.0. Is Hawaii even a state?

I really am amazed that a judge sitting on an island in the Pacific can issue an order that stops the president of the United States from what appears to be clearly his statutory and constitutional power.

Who did Judge Derrick Watson think he was telling the president that he couldn't block travelers from six countries that just happened to have majority-Muslim populations? If Donald Trump says we need to exclude all refugees for 120 days for national security reasons, then that's what we need. Except that no federal court yet has been willing to just take the president's word for it. No one seriously believes that Donald Trump could even find these six countries on a map, much less that he has given serious thought to the national security needs of our immigration system.

'Immigration Ban Is One Of Trump's Most Popular Orders So Far' pic.twitter.com/wAelwuQ4BE

Maybe it's because he said of himself in December of 2015

Donald J. Trump is calling for a total and complete shutdown of Muslims entering the United States.

Or because he repeated his call to ban Muslims in June of 2016.

I called for a ban after San Bernardino, and was met with great scorn and anger, but now many are saying I was right to do so.

Or it could be the facially illegal travel ban he signed into law on January 27, 2017. At the signing ceremony, he practically winked at the camera while saying, "We all know what that means."

Or that he only took the call for a Muslim Ban off his campaign website a week ago in preparation for a hearing before the 4th Circuit.

Minutes after we asked the WH why the President's campaign website still called for a Muslim ban, it appears the statement was deleted. pic.twitter.com/1VzefJuoQF

But Donald Trump is a counterpuncher, not some sissy intellectual. He wasn't going to make his case to the American people. Much wiser to attack the judges, right?

First the Ninth Circuit rules against the ban & now it hits again on sanctuary cities-both ridiculous rulings. See you in the Supreme Court!

No, He Will See YOU In Court!

Yesterday, a three-judge panel from the 9th Circuit Court of Appeals was the latest to hear arguments on the travel ban. There was some discussion of which section of the Federal Code is controlling: 8 USC § 1182, which grants the President broad authority over immigration, or 8 USC § 1152, which forbids him to exclude immigrants based on nationality. But the predominant issue is what courts should do when they believe the executive is acting in bad faith. We can't predict the outcome of this case based solely on the hearing. But a few passages highlight the ways that the president's narcissistic lunacy is throwing the judicial system into chaos.

Judge Ronald Gould makes no bones about doubting Trump's stated reasons for the ban, forcing Solicitor General Jeffrey Wall to insist that COURTS MUST NEVER, EVER LOOK BEHIND THE CURTAIN.

Wall: This is rational basis review. Is it a legitimate purpose on its face? And is it bona fide? Does it bear a rational relationship to what the government has done? [...] And I think the benefit of that standard is that it doesn't call on courts to make these determinations, the second-guessing of national security determinations that they're sort of ill-equipped to do. [...] And here you would need official capacity statements, post-inauguration that were unequivocal showing that the president and members of his cabinet were acting in bad faith.

The Court is also not pretending that Candidate Trump is an entirely different guy from President Trump. We all heard what he said on the campaign trail.

Judge Michael Hawkins: Has the president ever disavowed his campaign statements?

Throughout the hearing, the specter of the 1944 Supreme Court decision in Korematsu v. United States looms large. In Korematsu, the Court ruled that the President's authority over immigration issues was broad enough to justify internment of Japanese Americans. The Korematsu decision is like the Keyser Söze of American jurisprudence: It represents a time in recent history when the court system really fucked up. For lawyers, it is a badge of shame. So, when a judge asks a lawyer to differentiate his position from the Korematsu holding, he's in deep shit.

Wall: I want to be very clear about this. This case is not Korematsu. And if it were, I wouldn't be standing here and the United States would not be defending it.

And here we come to the crux of the issue. Acting Solicitor General Jeffrey Wall is a respected person with a lot of integrity. He can come before the Court and say, "I would not defend an openly racist, illegal order." His boss, however, is not. Even Donald Trump's supporters say he should be taken seriously, but not literally. Every day another person is tasked with sacrificing his honor on the bonfire of Trump's sham presidency. Having no integrity, he hides behind Rod Rosenstein, HR McMaster, or Jeffrey Wall.

No one believes that Trump's Immigration Order is based on national security needs. We all know damn well that he promised his racist followers a Muslim ban, and he's doing his best to deliver on it. The only question is whether the courts are going to take the word of the decent civil servants dispatched to defend this indefensible bigotry.

And just in case anyone needs a reminder of Trump's original motivation, a federal judge in Michigan has given the Trump Administration until Friday to produce the white paper that Rudy Giuliani referred to in his infamous interview with Jeanine Pirro. The ACLU and the Arab American League want the government to explain just what motivated its original version of the Muslim ban.

I’ll tell you the whole history of it. So when [Trump] first announced it, he said "Muslim ban." He called me up. He said, "Put a commission together. Show me the right way to do it legally."

So, soon we'll see what legal wizardry Rudy and his merry band of bigots cooked up to keep Muslims out of THEIR AMERICA. As if anyone needed further proof.

Holy shit! This administration is killing us! Please contribute to the Ambien and Arugula Fund for Insomniac Elitists!