NO PENIS! NO PENIS! YOU'RE THE PENIS! (This Is Just A Really Good Campaign Ad.) 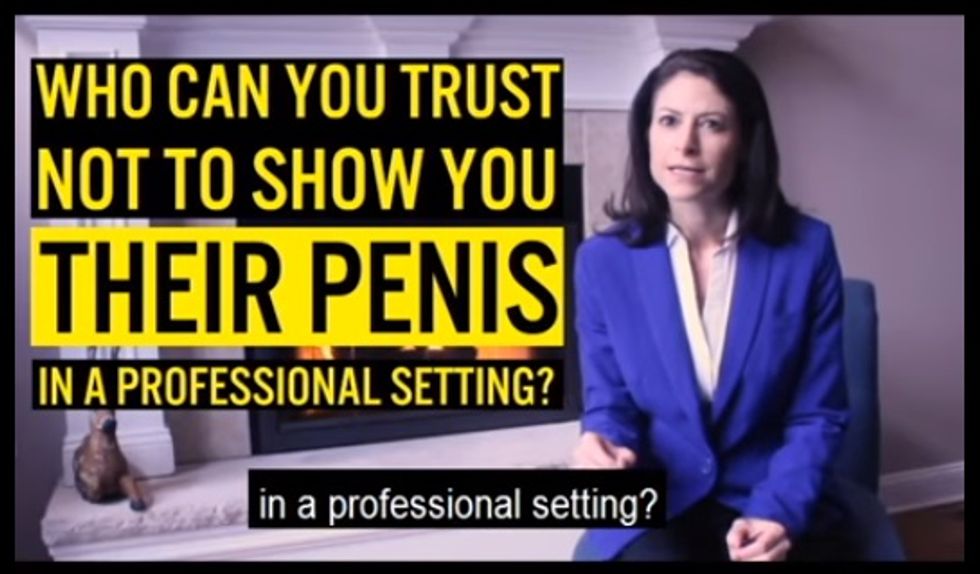 Meet Dana Nessel, a Democratic candidate for Michigan Attorney General. She's a Detroit attorney who became Michigan-famous for leading the legal fight for marriage equality in the Great Lakes State (and in the Wolverine State, too). And as her pretty-damn-good online ad suggests, she has a good idea for reducing the amount of sexual harassment by icky men in high office: Get more women in office.

If the last few weeks has taught us anything, it’s that we need more women in positions of power, not less. So when you’re choosing Michigan’s next attorney general, ask yourself this: Who can you trust most not to show you their penis in a professional setting? Is it the candidate who doesn’t have a penis? I’d say so.

Nessel's look of mock superiority and self-satisfaction after delivering that line is probably worth electing her, all in itself:

Nessel also addresses the shouldn't-be-an-issue of whether there might just be too many women on the Michigan ballot next year, since Debbie Stabenow will be up for re-election and there's a strong chance Michigan Dems will field women candidates for senator, governor, attorney general and secretary of state. Pfft. What of it? asks Nessel: "I’m a woman. That’s not a liability, that’s an asset."

And then there's the mandatory tuff-on-crime message, only with a decidedly timely spin, and a pledge:

I want to tell you what you can expect me not to do. I will not sexually harass my staff, and I won’t tolerate it in your workplace either. I won’t walk around in a half-open bathrobe, and I’ll continue to take all sex crimes seriously, just like I did as a prosecutor.

A Detroit teevee station is calling the ad "controversial," because state Republicans insist it must be:

"Sexual harassment is not a laughing matter," said Sarah Anderson, communications director for the Michigan Republican Party. "In a crisis, a leader fights for what is right, they don't exploit a crisis for personal gain."

That's pretty impressive talk for somebody from a party whose Alabama cousins, and whose President, think it's their highest possible priority to get an accused child molester into the Senate.

If you'd like to throw some money Ms. Nessel's way, her campaign site is right here. We're looking forward to her kicking some asses, and not grabbing a single one.

It's your Open Thread -- no, no, not your open bathrobe, you.