No, Ruth Bader Ginsburg Is Not Resigning Because Trump Won, Or Resigning At All. Jesus! 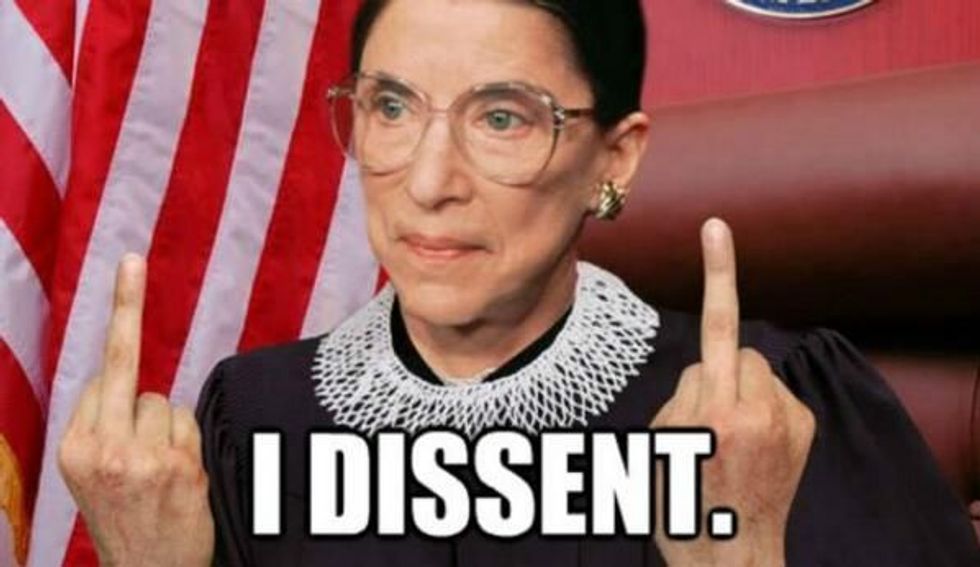 Oh, goody, more fake news out there, OR IS IT? The latest attack of collective stupid to make the rounds of Facebook is a story from a fake news site claiming that Ruth Bader Ginsburg is about to leave the Supreme Court, because she doesn't like Donald Trump. Which makes not the least bit of sense, because why would she give him a chance to appoint a replacement, but this is fake news we're talking about, so "plausibility" isn't really high on the priority list to start with. ABC News debunks the completely fabricated story, but its truth-squad attempt has its own problems, mainly an ambiguous headline: "No, Justice Ginsburg Hasn't Said She's Resigning Because Trump Won." Oh. So she's resigning for some other reason? No, she isn't resigning at all, "What" is the name of the guy on second, Han shot first, and global warming is still a fact.

What we're getting at here is that when even a debunking is ambiguous, we're pretty much screwed.

So what happened was that on December 22 a fake news site called "Success Street" (Here's an Internet Archive link so the schmucks don't get any pageviews) ran a story breathlessly announcing Ginsburg's imminent resignation, complete with the breathless headline, "Breaking News: Justice Ruth Bader Ginsburg is RESIGNING From The Post of Associate Justice of the Supreme Court!!!!" That story, reposted verbatim at multiple fake sites, then got forwarded all over Facebook, because everyone knows a credible news outlet will never use more than four exclamations in a headline.

Another dead giveaway: the story is loaded with a bunch of paragraphs in all-caps, just like real news is. And as is typical of a lot of these sites, the story is a mix of genuine and completely made-up quotes:

Protip for Fake News sites: if you rerun in December a fake story that first surfaced in August, you'll want to update phrases like "The Supreme Court is in recess for the summer," which may make you seem a tad less credible.

He can't handle the Ruth

ABC News tracked the first iteration of the fake story to yet another fake site called "TheRightists.com," which first posted the story August 8. And as you may recall, Ginsburg really did say some of the things attributed to her last summer, like calling Trump a "faker" and saying "I don't want to think about that possibility, but if it should be, then everything is up for grabs," as well as telling the New York Times, "I can’t imagine what this place would be -- I can’t imagine what the country would be -- with Donald Trump as our president." But no, she never pledged to resign if he became president, and after Trump whined about how members of the Court aren't allowed to have opinions, Ginsburg apologized for the "ill-advised" remarks.

As for resigning, hell naw. Ginsburg's position today is no different from what she said in 2014, and repeated to NPR in October:

"My biographers ... would like to have my time at the court almost complete before they finish the book. We decided ... to flip the order."

Was that her way of saying she doesn't intend to retire anytime soon?

"I will retire when it's time," Ginsburg replied. "And, when is it time? When I can't do the job full-steam."

And if you're a real news site setting out to debunk a fake news story, you also might want to go with a headline that leaves no doubt about what's fake and what's real. Heck, we're just a mommyblog and dick joke emporium, and we managed that.