No, The KKK Is Not And Has Never Been Liberal: A Historysplainer 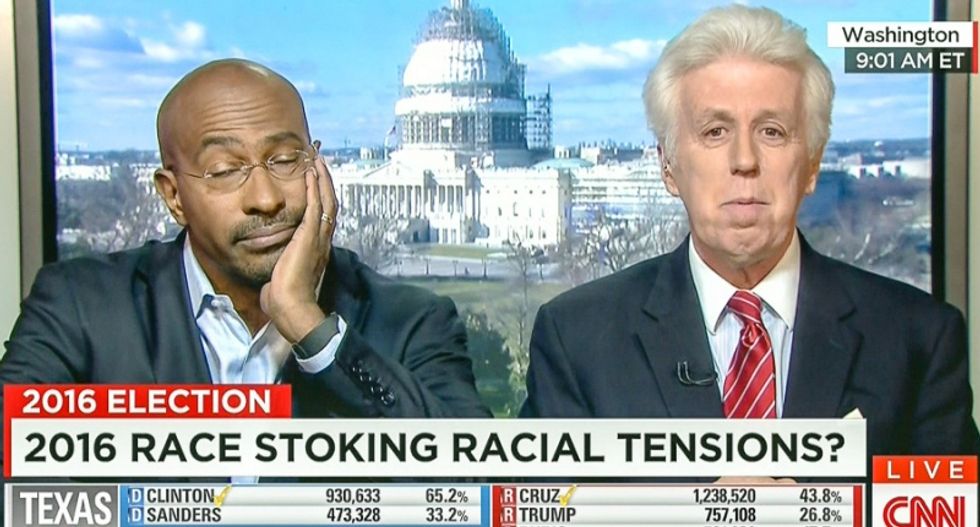 Of course the Ku Klux Klan was never on the side of liberals and progress. This goes without saying. There can't possibly be anyone who disputes this basic notion, could there?

The internet was abuzz all Wednesday with reports of an Epic™ confrontation between two CNN pundits on Super Tuesday: Van Jones (a Democrat) and Jeffrey Lord (a Bag of Assholes). After Lord insisted Donald Trump had disavowed the KKK "many, many, many, many times" and that Democrats were just trying to score political points by making a big deal out of Trump saying, "new phone, who dis?" when confronted by Jake Tapper, Lord and Jones got into it.

In particular, let's focus our attention on one exchange at 2:15:

NO. Nope. NEEEEEEEEEEWWWWWWWWWWWWWP. That statement is the wrongest wrong that has ever been wronged. That statement could not possibly be more Wrong with a capital "W" if it simultaneously blamed vaccines for autism, claimed the Holocaust didn't happen, and sodomized a turkey. One day, they will build monuments to the wrongness of Jeffrey Lord's five fantastically dumbshit words, except they won't, because they will be too busy wondering who exactly the fuck is Jeffrey Lord?

Well, he is the guy who then said this:

JONES: You can put whatever label you want, that's your game to play.

LORD: No, it's important to history.

Oh, you didn't. You fucking DID NOT.

Are we doing this? We guess we're doing this. LET'S WONKSPLAIN THIS SUMBITCH.

Was The KKK Ever Liberal Or Leftist Or Whatever Word You Want To Use?

Hell fucking no, it wasn't! The KKK was both founded and has acted as a conservative organization in every possible sense of the term for literally its entire history. For fuck's sake, we can't believe we even need to clarify this. What the hell basic fact of reality are Republican wankpuffins like Jeffrey Lord going to dispute next? Idris Elba's sexiness? Gravity? Baby pandas being adorable?

So let's get into the history of the Klan, because apparently, Jeffrey Lord slept through Social Studies.

The Original KKK Was Mad About Being Lame Losers

The KKK originally formed in the late 1860s. Can you guess what its formation was a response to? If you guessed "to further leftist ideals," you might be CNN pundit and complete fucking idiot Jeffrey Lord!

Actually, it was because white loser Southerners who'd just lost the Civil War like a bunch of losers were mad black people were suddenly being treated like actual human beings. One of their first Loser Grand Wizards was former Confederate Lieutenant General Nathan Bedford Forrest, who may have been an all-around terrible human being, but who was definitely a majestic statuary inspiration. The group rampaged across the South, assaulting and killing freed blacks who dared try to assert their humanity and intimidating Republicans into not exercising their now-constitutionally-guaranteed right to vote. They were (and are still) terrorists in every sense of the word.

You might have noticed the word "Republicans" in that last paragraph, so let's talk about that! It is a True History Fact the KKK's members were Democrats at the time of the group's founding, because the Republican Party had been formed to oppose slavery in the mid-1800s, and Abraham Lincoln (a Republican president) had freed the slaves. The Democratic Party, meanwhile, had supported and propped up slavery for its entire history. This isn't entirely surprising, considering the Democrats' base in the mid-1800s was largely in the South.

Hey, you know whose base is currently in the South today in 2016, which you will note is NOT a year in the mid-1800s? HINT: IT ISN'T THE FUCKING DEMOCRATS.

Anyway, the first iteration of the KKK was effectively wiped from existence when Congress and President Ulysses S. Grant -- who knew maybe one or two things about telling slavery advocates to go fuck themselves and also personally kicking Nathan Bedford Forrest's pasty ass -- combined to drop a massive fuck-you-wrath-of-God hammer on their heads.

But just like measles, the disease of the KKK resurfaced after rampant stupidity was allowed to fester and coagulate. After a relatively brief, abortive comeback in the 1920s, the Klan really came back to prominence in the American South during the 1950s.

Hey, what started in the 1950s, again? Oh right, it was the Civil Rights Movement! The modern incarnation of the KKK (and also too the Confederate Flag, which wasn't A Thing before then) started -- again -- as a direct response to black people demanding to be treated like people, a thing supported by liberals and opposed by conservatives.

This time, the KKK did the same violent shit they had in their first incarnation, except now they were allied with local police and government officials (many of whom were KKK members), so they acted with almost complete impunity. The KKK did a lot of awful, violent, terrorist shit -- including assassinating NAACP organizer Medgar Evers and committing a whole mess of church and synagogue bombings. Remember Dylann Roof? Yeah, what he did was a page straight out of the KKK's (mostly illiterate) book.

The Civil Rights Movement, meanwhile, was supported by two Democratic presidents from the Democratic Party, John F. Kennedy and Lyndon Johnson. This support for decency and opposition to conservatism lost Democrats the South -- and the white racist KKK vote -- seemingly permanently. Though Johnson's famous quote about "we have lost the South for a generation" is likely ahistorical apocryphal horseshit, it's indisputably true that after the Civil Rights Act and Voting Rights Act, the membership of the KKK abandoned the Democrats wholesale for the Republicans.

If there is a current KKK member voting Democrat, that person must be the most confused human being in the whole entire world.

Wait, That Makes It Sound Like The KKK Are Currently Trump Supporters!

[contextly_sidebar id="epjfS90NokZGhChzv1pc3pcc3H4OQKCK"]That is because they are. You'd think "former KKK leader David Duke just endorsed Donald Trump" would be a pretty clear indication that the KKK weren't a bunch of dirty free-loving socialist hippie lefties, but rational thought seems to be a bridge too far for many conservatives. This is not altogether surprising, as they tend to be willing to blame liberals for everything awful in the universe, up to and including the discontinuation of Crystal Pepsi, the persistent success of the New England Patriots, and feline AIDS.

Republicans love to say that because the KKK was founded by Democrats in the 1860s/1950s, Democrats are the real racists now! And while we know conservatives are as a rule not very good at understanding change, we didn't think that applied to the concept of the passage of time itself.

This has been your Thursday Wonksplainer. Good afternoon, good luck, and fuck you, Jeffrey Lord.