None To Beam Up Just Yet: Your Saturday Nerdout 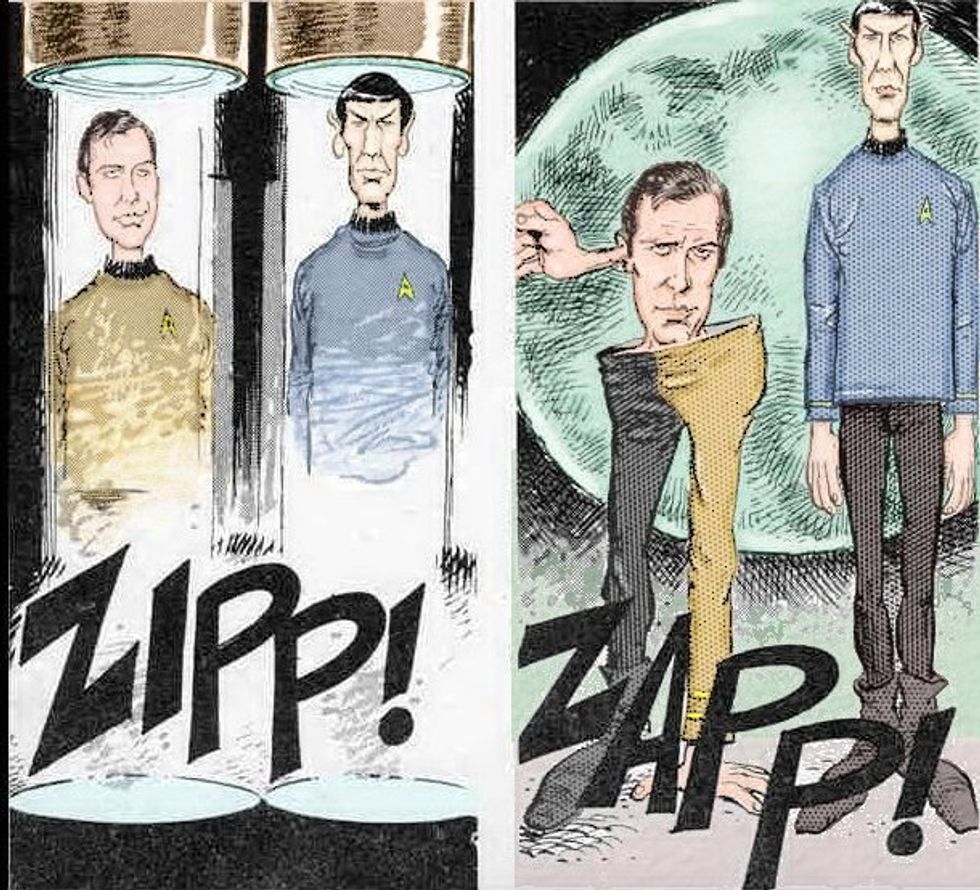 Happy Saturday, nerdlings! We have all sorts of geeky goodies for you today, so warm up your Oscillation Overthrusters, make sure you have enough gigawatts for your flux capacitors, and have another cup of coffee. Also, you may as well give up on any hope that you'll get a decent cup of tea from Zaphod Beeblebrox. It ain't gonna happen.

Teleportation Is Real! But Not Yet An Amazon Delivery Option

NPR ran a pretty cool story about the challenges of teleporting a single atom from one place to another. The bad news is that you can't beam up to the Enterprise or even zap across town. This is because they're not sending the whole atom -- just the information in the atom, essentially destroying it in one place and reassembling it across the room, which is still a pretty good way to win a bar bet. As Sir Terry Pratchett said, "No one knows the reason for all this, but it is probably quantum."

Also, you should know that the Onion has figured out one of the great remaining mysteries of the Universe: Dark Matter. No one knows what the hell it is, so let's just say it's nitrogen and get on with our lives.

Io9 brings us a feature on a series of videos by Marcelo Zuniga that tracks every single change to all three movies in the original Star Wars trilogy, or as they're known in the Zoom household, the real Star Wars movies. Beyond the stuff we all know -- Han shot first, dammit -- these videos attempt to track all the changes, from the unremarkable (replacing a matte painting with a digital background in the Detention Level scene of the first movie) to the truly loathsome (adding that NOOOOOOOO! to Vader tossing the Emperor to his death in Return of the Jedi). Fans do weird stuff sometimes. Here's the first one, of four:

Oh, but that's hardly anything when it comes to obsession: a couple months back, Vox did a cool piece on the attempt by a team of fans to "re-assemble" a nearly-perfect replica of the original 1977 cut of Star Wars, the "Despecialized Edition" -- which of course, violates copyright from here to the Moons of Neepzor.

The Finest Nerd Outrage Of All Time

Deadspin blogger Albert Burneko tweeted this a few days back, and it just might be the platonic ideal of a deleted comment (We run ours on Sundays, he puts his on Twitter. The dumbth must be shared). No, you don't really need any context:

It's truly a work of art. You couldn't help hearing it in the voice of the Comic Book Guy from The Simpsons, could you?

And while it's true you didn't need any context to appreciate the sheer magnificence of that missive, we thought we should do more research before publishing, so we did find the article it's replying to, and boy are we glad we did: it's quite possibly the best take on the eternal "Batman Or Superman" debate ever written, and we can't help but agree with Mr. Burneko: Batman is a choad. Yes, we know, fightin' words. But go hear him out.

Your Dog Is Concern Trolling You

Here's a nifty Science 'Splainer from io9 addressing another of the Great Questions: Why Are Dogs So Insanely Happy to See Us When We Get Home? Turns out that, no, it's not exactly because they were absolutely certain we'd never come back, which is why they had to dive into the kitchen garbage can to see if we were in there, maybe. Or at least not only that. Mostly, it's because they're social critters that are very attached to you as a member of their "pack," and have no idea why you'd ever go away from the pack in the first place. Also, they want to get a good sniff of your face to answer some important questions. Neuroscientist Gregory Berns explains what's going on there:

“When they jump up, they’re trying to lick you in the face,” says Berns. “Part of that is a social greeting, but they’re also trying to taste and smell you to figure out where you’ve been and what you’ve done during the day. So some of it is curiosity. If I’ve been with other dogs, for instance, my dogs know it, and they resort to sniffing intensely.”

Man Must Have a D'oh!

Some goofball made a mashup video imagining the opening credits for an unholy fusion of The Wire and The Simpsons.

But Why Would Anyone Be Mean To Bill Nye?

And finally, it seems that Bill Nye has decided to get in on this whole "mean Tweets" trend, though we should warn you that this is not part of the official series from whatever late-night show started it (we could have looked it up, but wanted to impress you with how deeply we don't care about that sort of thing).

We have to take issue with one of those selections, though. "Bill Nye the Science Guy is trippy as fuck" doesn't sound at all mean to us -- we're pretty sure that's a compliment, man.

You froods have a hoopy week, and please let us know if you ever find out what that watermelon was doing there.