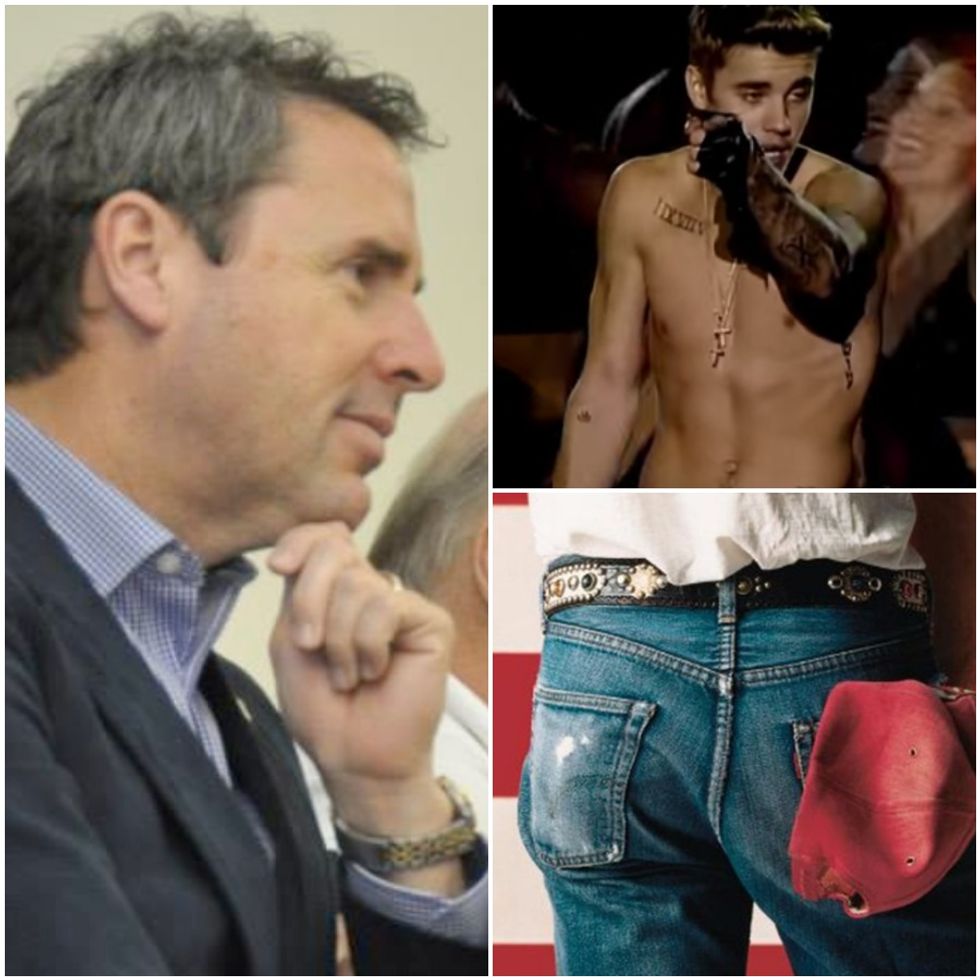 The congressman, pictured left, is having a hard time choosing.

You might have heard that Bruce Springsteen was one of the first to actually put his money where his mouth is regarding North Carolina's new hate law HB 2, canceling a scheduled concert in Greensboro. Can you believe that? Why would The Boss punish gay-hatin' wingnut politicians by denying them the privilege of singing along to "Born In The U.S.A." and not understanding what the fucking song is about?

Well, one Republican North Carolina congressdork, Rep. Mark Walker, is going to teach Springsteen a lesson in how his actions have consequences. From now on, Springsteen is dead to him, and he is a Belieber:

A U.S. congressman who represents portions of Greensboro, N.C., is accusing Bruce Springsteen of being a "bully," after the rock star canceled a concert there to protest a new law that's being described as anti-gay.

"It's disappointing he's not following through on his commitments," said Rep. Mark Walker, a Republican freshman congressman.

"I've never been a Bieber fan, but I might have to go. Maybe artists who weren't 'born to run' deserve a little bit more support," he said, referencing one Springsteen's most famous song titles.

"Bruce is known to be on the radical left," continued Walker, "and he's got every right to be so, but I consider this a bully tactic. It's like when a kid gets upset and says he's going to take his ball and go home."

Oh goodness, how many wrong things just laser-sharted out of this man's tongue cave?

THING ONE, Def Leppard and Justin Bieber probably don't like the new stupid law either. THING TWO, other artists will probably follow Springsteen's lead. THING THREE, most actual artists are on the left, because creativity and beauty don't come out of angry wingnuts who hate everybody. THING FOUR, Springsteen is not being a bully, he is simply exercising his right not to do bidness with a state that's enshrining bigotry into law in the year of our lord 2016. Paypal is doing the same damn thing. Free market sucks dick when you're on the wrong side of it, don't it, fuckbreath?

THING FIVE, Rep. Walker, if you follow this link and the links after it, you can see a pic of Justin Bieber's penis probably. In case you'd be into that.

THING SIX, this is a Justin Bieber song called "Baby." Would YOU like to be Justin Bieber's "baby," Rep. Walker?

This, on the other hand, is a Bruce Springsteen song: No offense to Biebs or his new fangirl Rep. Mark Walker, but we think we'll stick with Bruce.

[wonkbar]<a href="http://wonkette.com/600372/mississippi-you-call-that-a-gay-hatin-bill-north-carolina-this-is-a-gay-hatin-bill"></a>[/wonkbar]Of course, Springsteen's not the only one to do this! Did you guys hear Bryan Adams canceled a concert in Mississippi in protest of that state's insane new anti-gay law? It's true! Biloxi lovebirds (AND TOURISTS, mostly) will not get to go to a big auditorium and surreptitiously finger each other while they listen to that "(Everything I Do) I Do It For You" song from Robin Hood, and it's all because the Mississippi government hates gays so much. Who's the real bully, HUH?

Anyway, we haven't heard of any Mississippi politicians turning on Bryan Adams and declaring that they'll only throw their sticky panties at Justin Bieber from now on, but American Family Association spokesgoon Bryan Fischer says that Adams and Springsteen are actually declaring war on Jesus, by canceling concerts, so that's funny.

[The Hollywood Reporter via Addicting Info]