North Korea Knows A Sexy Tyrant Daddy When It Sees One, Gets It Up For Donald Trump 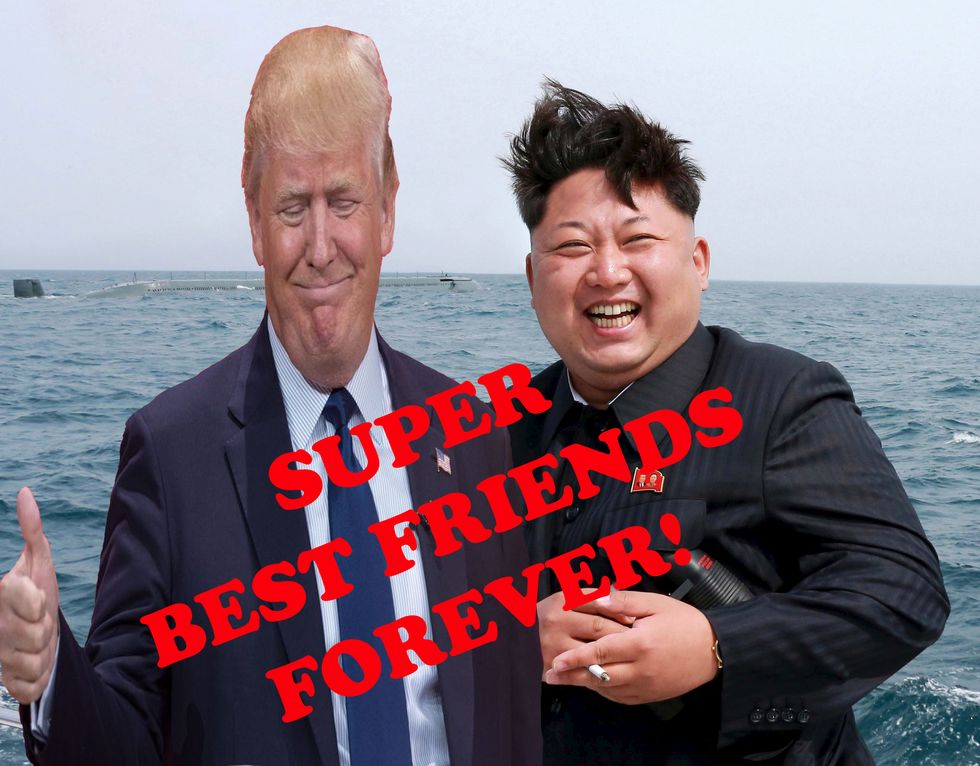 The Best Friends Forever Club just got a new member!

It's an apocalyptic love story for the ages: a shadowy and misunderstood political despot from a mysterious far away land secretly watches a dashing and energetic, blonde haired, blue-eyed teevee person rise to power. As the pressure mounts on the ambitious Westerner, the Glorious Leader longs for the attention he so desperately craves, but another failed military venture threatens to leave him untouched by the Westerner's tiny grip. Will their passions for each other ignite a nuclear holocaust, or will their desires fall like a limp rocket?

“In my personal opinion, there are many positive aspects to the Trump’s ‘inflammatory policies."

Well isn't that just precious? One trigger-happy lunatic wants to be besties with the another loud-mouthed maniac! Never before have geopolitics and the threat of thermonuclear war ever held the potential for such a beautiful friendship! It's just like ol' Ronnie Reagan and Gorbachev, but with better hair and better walls!

“Trump said ‘he will not get involved in the war between the South and the North,’ isn’t this fortunate from North Koreans’ perspective?”

It sure is, boy-howdy! Considering all the obtuse shit that civilian groups have had to do over the last few years to rescue journalists and civilians from the DPRK, it sure is a good thing Trump's willingness to support North Korea has strategic value in the Asia-Pacific region. We don't need some bloated federal agency with the expressed purpose of managing international affairs to work at securing the release of prisoners. After all, we're at war with the the Red Chineses and we don't want them to gain the upper hand!

“The president that U.S. citizens must vote for is not that dull Hillary – who claimed to adapt the Iranian model to resolve nuclear issues on the Korean Peninsula – but Trump, who spoke of holding direct conversation with North Korea.”

Can you see it? The shitty romance novel of a peace summit will take place at one of Trump's gaudy resorts. After a few rounds of nine-hole where they putt-putt on Trump's green, they'll retire back to the sauna where they can swap hair grooming tips, gossip about censoring journalists, political assassinations, suppressing free speech, abducting the citizens of sovereign nations, laugh heartily about crimes against humanity, and who has the best state-run media machine. Why, these catty bitches are already making up silly nicknames.

Trump doesn't have to listen to U.N. Secretary General Ban Ki Moon anyway! He's a South Korean, and a big dummy! What does he know about nuclear programs, or missile technology? Stupid U.N., with its sanctions, and Security Council, and denouncements! John Bolton was right, we don't need the U.N.!

All those bad things that people say about North Korea? Those are just horrible lies spread by the liberal Western and South Korean media! All that stuff about prison camps, and a a starving population, they're just propaganda! Ask NBA superstar and goodwill ambassador to North Korea, Dennis Rodman! He and God Emperor Trump already have so much in common!

Come on, America! Just let's skip this BORING election already! Forget about "dull Hillary" already, and "crazy Bernie," and let's all get aboard the Trump-train to Pyongyang!