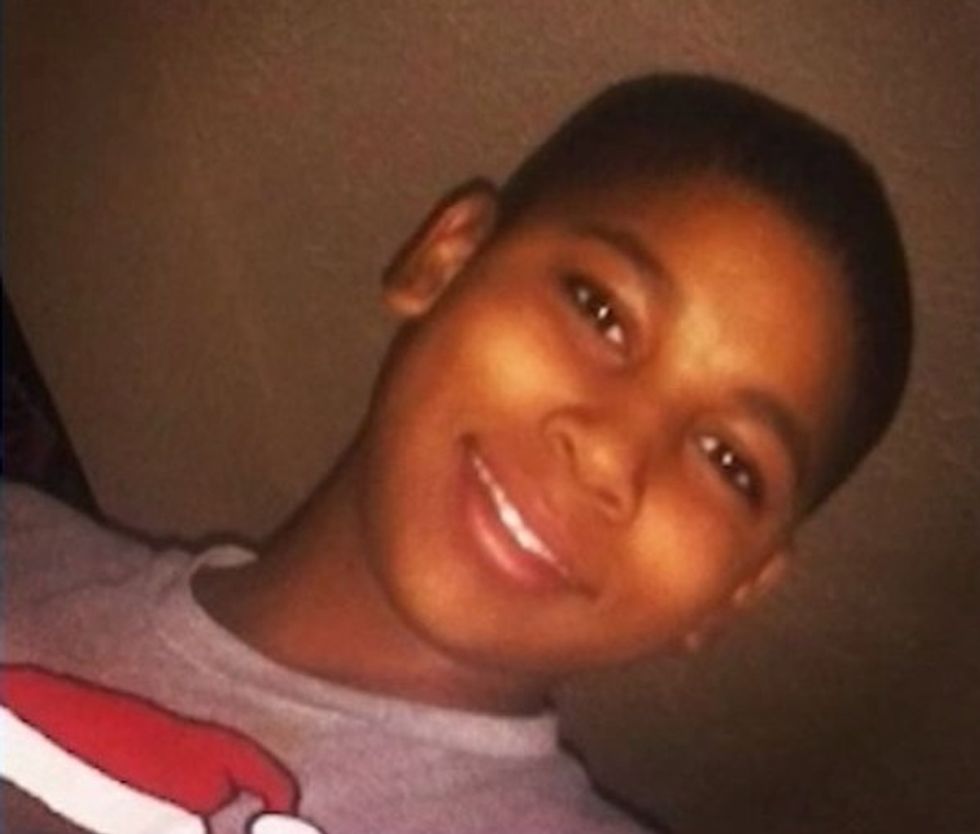 There's this publishing concern in Cleveland with the mellifluous name "Northeast Ohio Media Group" (NEOMG) -- it owns the Cleveland Plain Dealer and runs the Cleveland.com website, which you might think are the same thing but aren't, quite. If the name sounds familiar, it's the outfit that also deep-sixed that embarrassing video of Gov. John Kasich acting like a petulant child. We're inclined to just call them "Cleveland Sociopath Publishing," but that might confuse the search engines.

As we noted Monday, Cleveland.com came up with an innovative way of covering the police shooting of 12-year-old Tamir Rice, who we want to emphasize was 12 years old when police shot and killed him on Nov. 22. The website ran a serious journalism investigation into an important aspect of the 12-year-old's death: It discovered that his father had some domestic violence convictions.* You see, since Tamir didn't actually have a juvenile criminal record, it was necessary to point out that his father was a criminal. As the publisher later explained, this might help people "understand the forces that lead children to undertake behavior that could put them in the sights of police guns," because being 12 years old and playing with a toy replica of a gun is such a provocative thing to do, apparently. Puts you right in the line of fire, and then two seconds -- literally two seconds -- after police show up, boom, down goes a child.

How do you follow up an act like that? Maybe by finding out what sort of disturbing family history might have led the rookie cop to automatically shoot a child two seconds after encountering him? Well ... close enough. Tuesday, NEOMG brought us another big story, this time based on an interview with the father of Tim Loehmann, the cop who shot Tamir Rice to death. Loehmann, according to the paper, is described by his neighbors "as quiet and respectful." Plus, he went to Catholic schools, so you know that he, unlike the child he shot to death, is probably a great guy.

Oddly, the media group didn't bother interviewing Tamir Rice's family -- that earlier story about their criminal tendencies was based primarily on public records. But for that real humanizing angle, sure, talk to the shooty cop's father, who seems like a nice enough guy. We learn that while Tim Loehmann was initially in shock right after the shooting, he's doing OK now, and is back at work at the police department, though not on the street. Tamir Rice isn't feeling nearly as well. But the important thing we learn is that Fred Loehmann, who wasn't actually there, is quite certain his son only did what he had to do.

Which was, may we remind you, to shoot a twelve-year-old to death two seconds after arriving on the scene. Apparently, among his many other admirable qualities, Tim Loehmann is an expert at assessing grave danger, as well as talking fast, because the initial story of Rice's shooting had the officers telling Rice three times to drop the toy gun, and Rice refusing every single time, before reaching for the toy gun in his waistband and then brandishing it. Indeed, the video doesn't show any requests at all -- just a cop car pulling up and a kid getting shot to death.

Hey, maybe Tim Loehmann has mutant super-powers of his own, like the ability to slow time down and issue three separate commands to drop a "weapon"?

But it had to happen that way, Loehmann told his father:

Fred Loehmann said his son did not know the gun was fake or that Tamir was 12 years old. One of the officers radioed back to dispatchers describing Tamir as possibly 20 years old, recordings show.

Anyway, Tim Loehmann's dad thinks the world of his son, as any dad would, and he also, it turns out, had his very own adventure with a scary black person with a replica gun! You see, back when he was an NYPD cop in the '70s, Fred Loehmann saw some exciting action, too!

While on patrol in Harlem in 1972, he came upon a man suspected in an armed robbery. The man turned around, extended his arm and silver flashed from his palm. Fred Loehmann cocked his service weapon, but held his fire.

"I just felt like he wasn't going to shoot me," Loehmann said. "If it would have been a real gun, I'd be dead."

The gun turned out to be a Derringer cigarette lighter, fashioned to look like a handgun.

Isn't it nice when fathers and sons share common interests? Kid Zoom and I like to read books together.

So there's your media balance for the week. Thuggish kid who got shot came from a line of criminals; nice Catholic boy who did the shooting is from a rich tradition of public service. Thanks for that insight, Northeast Ohio Media Group! It's good to know that someone's looking out for the cops who keep us safe from twelve-year-old boys playing with Airsoft guns.

*There's one small detail related to that victim-blaming horrorshow of reporting that gladdened our hearts a little bit: On MSNBC Tuesday, veteran Cleveland political columnist Connie Schultz noted that the Plain Dealer's print edition refused to run the thing. It is a creature solely of NEOMG.