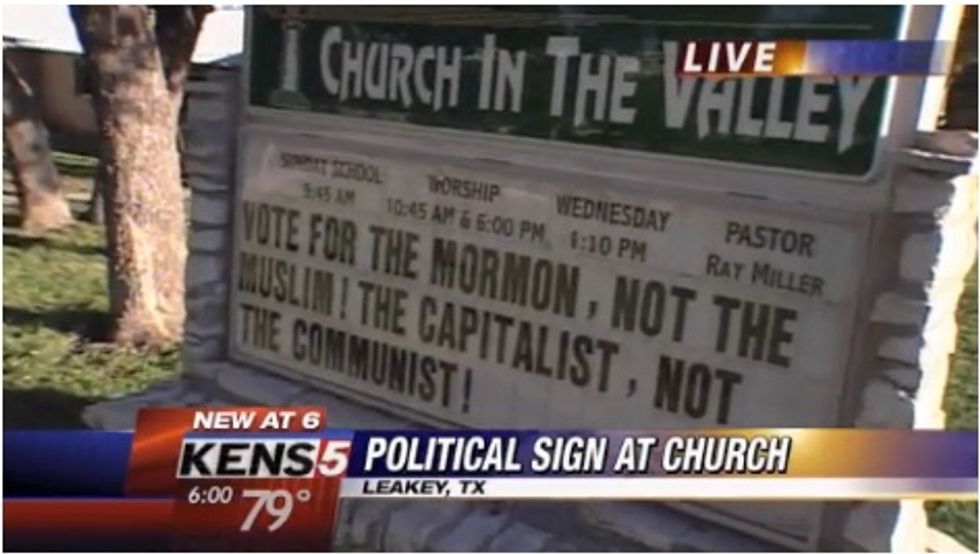 Teeny-tiny little "non-denominational" (FUCKIN' CHRISTIAN, BOY) Church in the Valley of Leakey, Texas, has a new sign up welcoming everyone but Barack Obama.

The sign reads, "Vote for the Mormon, not the Muslim! The capitalist, not the communist!"

That marquee standing outside a non-denominational church has become the talk of the town in Leakey — about 90 miles northwest of San Antonio.

The Church in the Valley is run by Pastor Ray Miller. Miller declined an interview but did say the sign was solely his idea. He said he changes the sign weekly and this isn't the first bold statement to be displayed.

The pastor said he feels strongly about the upcoming presidential election and feels the message on the marquee speaks for itself.

Yes, in that it says, quite loudly, "I do not want my tax exemption any more and am also a terrible dinner companion."

Of course, you can simply add Pastor Miller to the growing flock (get it - religion pun!) of churches that are openly flouting IRS rules for religious nonprofits and endorsing political candidates. You see, it is clearly unconstitutional for the IRS to limit the freedom of speech in exchange for special tax treatment that is required nowhere in the Constitution, because of how America works.

For more on this, let's check in with noted constitutional scholar/inexplicable Leakey tourist (state park and river nearby, dudes) Blake Fischer:

“I can see why there’s some controversy, because the separation of church, and maybe they shouldn’t get involved in it,” said tourist Blake Fischer. "But I don’t see no problem with them trying to send a message."

Except for the double negative and the odd application of the principle of separation of church from something else, Fischer channels the very essence of Thomas Jefferson in responding to this sign. Presumably, he then had some legendarily freaky slave sex.

We Wonketeers wish the best to Miller and his church, who have had to suffer the trials and tribulations of constant threatened shutdowns for expressing their religious viewpoint, particularly in light of the Bible's clear command to oppose both Islam and communism, despite both of those post-dating the Bible by centuries. It really is a book of untold knowledge!