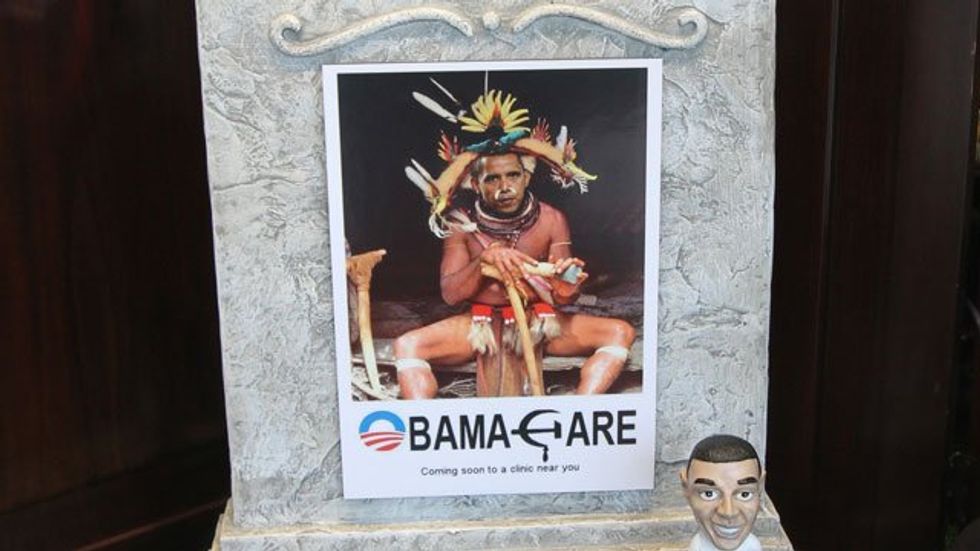 It is hard in America for non-racists.

The range of free expression such people have is incredibly limited by actually racist anti-racists who want to read racism in every fucking little thing, like when you say a black man is a vicious savage native stereotype. BITCH I NEED MY METAPHORS FUCK YO RACISMS.

The voodoo storefront has evoked outrage in the beachfront community of Spring Lake, N.J. But Bill Skuby, 66, owner of the local men's store, Skuby & Co. Lifestyle Clothing, insists that the display is not political. ... "It's personal."

The store's window display depicts an image of Obama's head superimposed in the body of a witch doctor that rests atop the word "Obamacare." The witch doctor image is placed under a tombstone epithet that reads, "I Told You I Was Sick," accompanied by a photo of the president in a doctor's coat and stethoscope.

On the tombstone stands an Obama bobble-head doll sporting a long-sleeved tee that reads, "Hoax," and underneath that is a zombie mannequin rising from the dead wearing a hat that says "F.Y.B.O.," an acronym apparently for an expletive phrase denouncing the president.

Racist or not, this is a man who knows how to fill a diorama. Slow clap for this douchebag, everyone.

Despite pushback from the community, Skuby plans on keeping the display up, and says that Romney would also receive the same treatment, based on one simple criteria.

Skuby, who admitted that his business has suffered because of his visual expression, said the community is trying to run him out of town. He said people have made him out to be a racist because of his anti-Obama display.

"If you want to call me a racist then go ahead. I can assure you I am not a racist; I just really want to see Obama go." Skuby said. "This is a good example of where race relations are under this guy's administration. ... This has absolutely nothing to do with race."

Skuby said that if Mitt Romney had the same plan as the president; his picture would be in the window.

Luckily, Mitt Romney did have the exact same plan as the President. He enacted it in Massachusetts! The President based his plan off of Mitt Romney's!

We wonder what a racist image of Mitt Romney as a doctor would look like? Rex Morgan, M.D. shopping at a Lands' End for chinos? Probably.