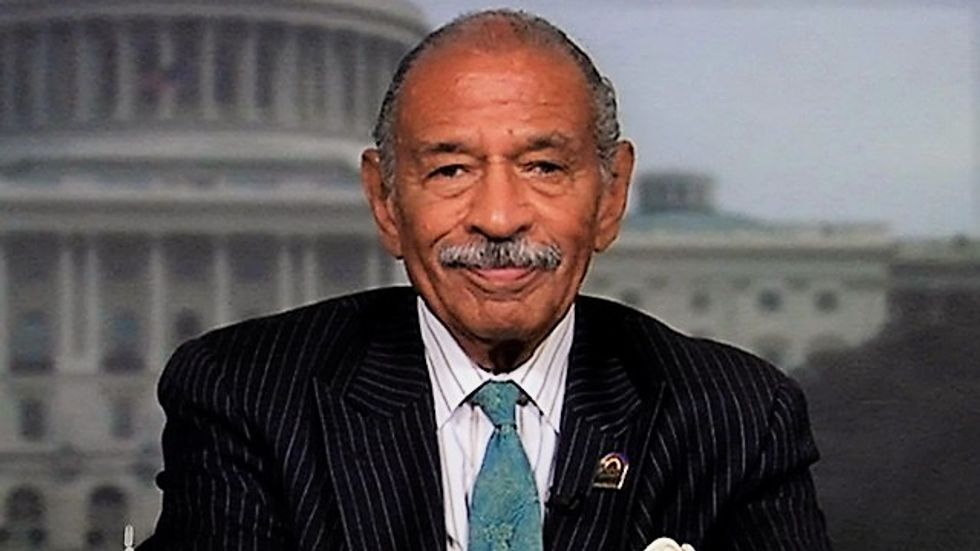 Sure it's crazy. But let's get behind it anyway!

From an intuitive perspective, the Trump administration might seem the absolutely wrong political time to be calling for single-payer health care. The sensible thing is for liberals to hunker down, hedge our bets, shore up our defenses, gird our loins, unmix our metaphors, and do everything we can to defend the Affordable Care Act, right? Well OF COURSE we're going to do that. But while we're at it, since Congress, the media, and a good chunk of the voting public are actually spending a few minutes focusing on America's ungodly mess of a health care "system" again, why don't we also make a hell of a lot of noise about single-payer while we've got their attention? And the appropriate vehicle is Michigan Rep. John Conyers's perennial House bill to extend Medicare to all Americans. As L.A Times business columnist David Lazarus says, even if it has no chance of passing in a Republican-controlled Congress, the bill, HR 676,

would build on the successful single-payer insurance program that already covers more than 55 million people and bring the United States in line with almost all other developed nations in providing taxpayer-funded health coverage for everyone.

Again, it doesn't have a snowball's chance in hell. But there's this guy, see, who sometimes, when he's caught in the right mood by the right people, with the right amount of flattery for what a smart guy he is, who'll sometimes glom on to an idea and decide he thought of it all himself. And he's the president for now, so he could be a very useful advocate if we could find a way of massaging his ego and convincing him he thought it up on his own.

Dr. Carol Paris, head of Physicians for a National Health Program, a group of 20,000 doctors who support a single-payer system, suggest a way to frame the argument for the guy:

Donald Trump is a businessman, not a lifetime politician [...] HR 676 is a formula for good business. It makes good business sense.

As Lazurus points out, that's borne out by a 2014 Commonwealth Fund study that compared healthcare in the USA to the systems in 10 other developed countries including Canada and our European trading partners. Not surprisingly, the U.S., which spends more per capita on health care, nonetheless ranked dead last of the 11 countries on "measures of health system quality, efficiency, access to care, equity, and healthy lives." A big part of the problem is that since we have a hodgepodge of different payment and delivery systems, administrative costs swallow about 25% of every health care dollar. That's for our beautiful free-market system, based on data from before Obamacare went into effect. And what do we get for spending more per person -- roughly $10,000 a year? The lowest life expectancy and health outcomes, on average, of the industrialized world. Mind you, our billionaires are in terrific shape, but there aren't enough of them to tilt the average.

Conyers, who has introduced a Medicare For All bill at the beginning of every session of Congress since 2003, doesn't think Trump is likely to be moved. He says Trump is "erratic," but unlikely to swing quite far enough to suddenly embrace single-payer. On the other hand, with 51 Democratic co-sponsors -- no Republicans just yet -- and the prospect of Trumpcare kicking millions of people off insurance if the ACA is repealed, it's just possible that true single payer might be the solution embraced when enough people are pissed off enough to throw the bastards out.

Oh, but it would be socialized medicine and it couldn't work and we'd go broke paying for it and DEATH PANELS! Not really:

A 2013 analysis of an earlier version of Conyers’ legislation by Gerald Friedman, a healthcare economist at the University of Massachusetts Amherst, found that progressive federal tax payments “would cost less for 95% of households” than the current system of deductibles, premiums and copayments.

He also concluded that because of huge administrative savings and greater negotiating strength with hospitals, doctors and drug companies, a Medicare-for-all system “would make it possible to provide universal coverage and comprehensive benefits to future generations.”

Doctors would still be able to choose appropriate care for their patients, and patients would be even more free than they are now to choose their doctors, since virtually all providers would be "in network." (Doctors who want to run super-expensive boutique health clinics for the very rich would be free to opt out of accepting Medicare, but most would opt in.) And insurance companies wouldn't be forced out of business, either -- as in Germany, they could still make a healthy income selling supplemental coverage for services beyond the basics -- like those five-star clinics with fresh mints on your bedpan -- that everyone would be entitled to.

With everyone covered, just think of how much would be saved on the paperwork currently devoted to making sure nobody makes thirty-five dollars a year too much to qualify for Medicaid, which could be eliminated as a redundancy. Healthcare spending would actually go to healthcare. Weird, huh? Don't worry, we could still deny Medicare for All to undocumented immigrants, just to rub it in their faces. (Bleeding heart liberals would save enough money to pay for clinics to pick up the slack.)

This is a great time to be calling your Republican congressdolts and telling them you support HR 676, if only to make your voice heard. It makes too much sense to become a reality just yet, because all the moneyed interests will fight it with all their interested money. But it's a fight worth having, again and again, until decent healthcare for everyone is a reality.

Plus, it would piss Wingnuts off no end if MILLIONS of Americans started demanding Medicare for All. The look on Bill O'Reilly's face would be gorgeous.