Not Sure How To Say This, But FBI Director Chris Wray MAY Have A 12-Inch Dick 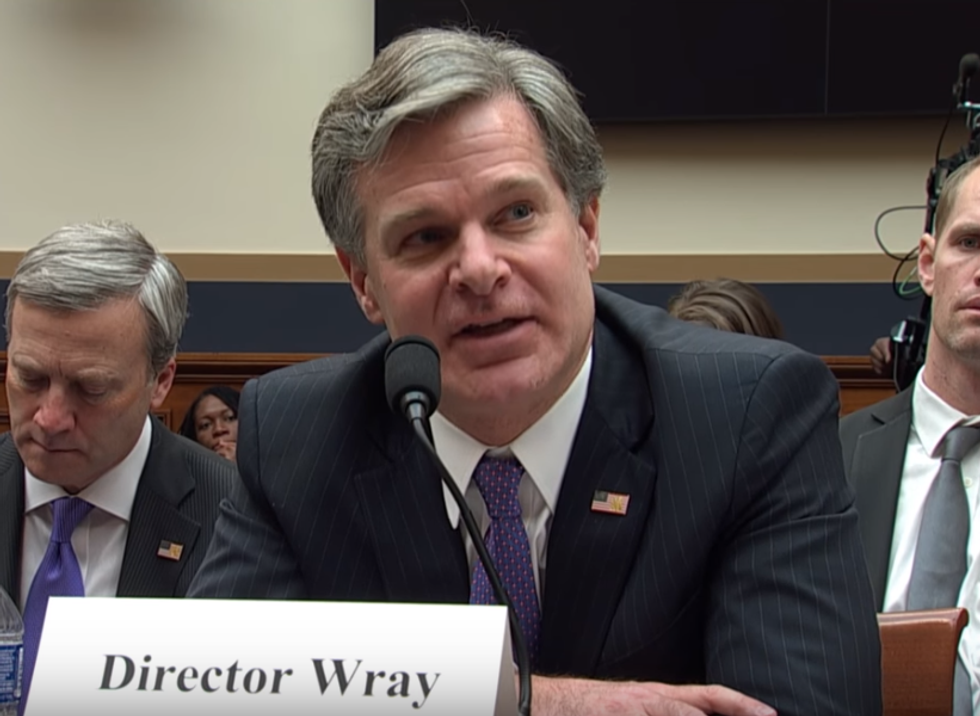 OK WHERE WERE WE? In our last post we covered all the crazy news coming out of the Robert Mueller investigation, about interviews with James Comey and Jeff Sessions, and the interview Mueller wants to do with Donald Trump, so the president can commit perjury at Mueller's face. In that post, we learned that Mueller's obstruction of justice case against the president may be much broader than we thought, including everything that's happened since he fired James Comey, and also including his attacks on the FBI and his attempts to fuck with Mueller's own investigation.

A bunch of interesting news has broken the past couple of days about Trump's attempted dictator-style purge of the FBI, and we would like to start this post by examining the possibility that ...

No, hear us out! It is just possible that the former Bush 43 appointee pictured above, whom Trump nominated as his very good and loyal FBI director after he fired Comey, may actually be a patriot, which would mean Trump made a big boo boo!

Axios reported Monday night that FBI Director Chris Wray threatened to resign -- some news sources are reporting his threat was more implicit than explicit -- over Trump and Jeff Sessions pressuring him to purge the FBI of people Trump views as being in bed with Hillary Clinton and James Comey and Comet Ping Pong Pizza in DC (#Pizzagate!). Specifically they have been up his ass to fire Deputy FBI Director Andrew McCabe, a smart guy who is #RIGGED against Trump, because he is married to a Democrat.

Trump hates Andrew McCabe, for reasons only understood by Sean Hannity and the syphilitic wombats that (allegedly) live inside Trump's brain. On top of being married to a Democratic Virginia political lady, he was close to the Hillary emails investigation and probes into the Clinton Foundation, and Hillary is not in Guantanamo right now, therefore McCabe is #RIGGED.

The busy bees at the Washington Post reported Tuesday that, after Trump fired Comey, when McCabe was acting FBI director, Trump invited him to the White House to try to grab him by the pussy, but unfortunately, and as usual, the president of the United States couldn't get there. Specifically, Trump just really wanted to know whether McCabe voted for him, or whether he was a treason-doing traitor who voted for Crooked Hillary Clinton:

[Trump], according to several current and former U.S. officials, asked Andrew McCabe a pointed question: Whom did he vote for in the 2016 election?

McCabe said he didn’t vote, according to the officials, who, like others interviewed for this article, spoke on the condition of anonymity to talk candidly about a sensitive matter.

Trump, the officials said, also vented his anger at McCabe over the several hundred thousand dollars in donations that his wife, a Democrat, received for her failed 2015 Virginia state Senate bid from a political action committee controlled by a close friend of Hillary Clinton.

Christ, Trump is such a motherfucking baby. According to WaPo, Robert Mueller is very interested in what happened in this meeting.

Here is some shit Trump has tweeted about McCabe:

Wray has most certainly not fired McCabe, which is Evidence #1 that he has a 12-inch dick. (McCabe may be getting the fuck out of Dodge shortly, though, once his pension kicks in. Would you want to deal with this shit?)

By our read, Sessions has been trying to play both sides of this, appeasing Trump when he can by doing his "dirty work" (he doesn't want Trump to make him go out in the backyard and cut himself a switch, after all!), but also sorta kinda telling the White House that Wray is really unhappy with all this pressure, and you really don't want to lose another FBI director right now, do you? (As WaPo reminds us, Sessions also memorably pissed all over House GOP idiots with their House GOP idiot conspiracy theories back in November when he testified before the judiciary committee.)

According to Donald Trump, a liar, Chris Wray never threatened to resign, not even a little bit. The White House, also a liar, released a statement that didn't exactly deny the report, and reiterated how it wants to do a banana republic purge at the FBI, of people Trump views as Comey/Hillary-lovers. (Because that is how things work in America! Political purges! YAY!)

And to be clear, the purge is working ... sort of. Jeff Sessions has been pushing Wray to make a "fresh start" and fire everybody Comey has ever met, including McCabe and James Baker, a career public servant and Comey confidante who suddenly lost his job as FBI general counsel in December. Also, Jim Rybicki, Comey's former chief of staff, has been canned. Indeed, as Rachel Maddow noted on Tuesday night, the scalps Trump and his goons want are the people James Comey confided in about Trump's obstruction of justice when he was FBI director. As Maddow said, they are "destroying his backup."

But look who Wray is replacing them with!

Dana Boente, the U.S. attorney in the Eastern District of Virginia who is acting head of the Justice Department’s national security division, has been selected to be the FBI’s next general counsel, according to people familiar with the matter. [...]

Boente is a veteran federal prosecutor who has led U.S. attorneys’ offices around the country and has risen to prominence in a variety of acting roles in the Trump administration. When Trump fired acting attorney general Sally Yates over her refusal to defend his travel ban, Boente took over and said he would defend the measure.

Wait, Dana Boente? That Dana Boente? The guy Obama mysteriously took out of the line of succession at the DOJ, possibly to trick Trump into sticking him right back in there? Which Trump then did just before Sessions recused? The guy Trump suddenly fired from his US attorney job in the Eastern District of Virginia in October 2017?

Boente was the person former FBI Director James Comey reported to when, according to Comey, Trump was trying to pressure him as part of the investigation into the Russia scandal. It’s led to some speculation that Boente could even be a potential witness in the matter.

And it was through Dana Boente’s office where Special Counsel Robert Mueller, who’s overseeing the federal investigation into the Trump-Russia scandal, first started using a grand jury.

THAT GUY, WHO'S BEEN HELPING ROBERT MUELLER, IS THE FBI'S NEW GENERAL COUNSEL?

Wray is like "OK! OK! I will get rid of Comey's boyfriends!" and replacing them with THAT GUY?

By the by, Wray's new chief of staff? Zachary Harmon, one of Wray's former colleagues. An anti-corruption prosecutor. Specializes in violations of the Foreign Corrupt Practices Act (FCPA). LOL, bet the Trumpers will just love him!

So we are back to our original question: Does Christopher Wray have a 12-inch dick? We are just asking!

All signs point to maaaaaaaaybe!