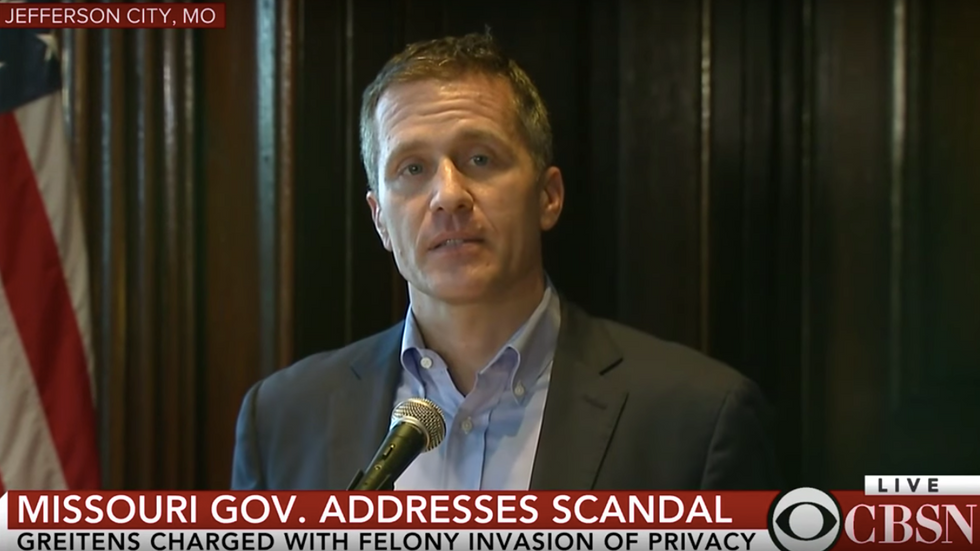 CONSENT, how does it work?

WHY IS ERIC GREITENS STILL HERE? Yesterday an Investigative Committee from the Missouri House issued a report on the Missouri governor's violent sexual relationship with his married hairdresser (Greitens, of course, is also married), and it is HORRIFYING.

Fact check: TRUE. We originally planned not to quote from it, since this poor woman's confession was secretly recorded by her ex-husband and released to the media, who ambushed her at work. She's been through a lot, in a city small enough that everyone knows her name whether the media print it or not. But then we read this statement from the witness's lawyers in support of releasing the entire transcript to "set the record straight." However, if you are a person who is triggered by accounts of sexual assault, this story is not for you.

Yeah, it's going to be one of those days.

On March 14, 2015, when the witness showed up at his house, the Governor allegedly instructed her to change into loose pajama bottoms and a t-shirt with the neck cut, before leading her down to the basement where he'd helpfully laid out a blindfold and exercise wrap so he could secure her hands to the rings and show her “how to do a proper pull-up.” Because he was prepared!

When she was blindfolded and tied to the rings, she says Greitens spit water in her mouth to "hydrate" her, ripped the pre-cut shirt open, yanked down the loose PJs, and took her photo.

[T]hen I hear him kind of, like, step back – take a step back and I hear – I can hear like a, like a cell phone – like a picture, and I can see a flash through the blindfold.

After which he demanded that she keep silent about their contact.

So I just didn’t answer at all, and then he spanked me and said, Are you going to mention my name? And I said – I just gritted through my teeth and I said, No. And he’s like Good – now that’s a good girl and was, like, back in his – whatever – you know, the thing that he had in his mind, the thing that he was going to do with me.

And even though she was crying and said, "I don't want this," and "I'm leaving," he put her in a "bear hug," lay her down on the floor, and took off his pants.

No, you cannot be governor of Missouri after this! This is sexual assault. And yet, Eric Greitens will not go away! Here's his statement yesterday, where he complains that it is NO FAIR they released the House report before his trial (for felony invasion of privacy) next month.

SO MUCH WITCH HUNT! And the GOP is in on it, too! Several Republican lawmakers have already called on Greitens to resign, including Missouri Attorney General Josh Hawley who is currently running to unseat Democratic Senator Claire McCaskill. Republican House Speaker Todd Richardson has called for a special session to consider Greitens's fate. And that's before the House Investigative Committee releases an upcoming report on possible campaign violations by the governor's veterans charity.

We never want to hear another word about the party of "Family Values"! Also, Eric Greitens needs to GET THE FUCK OUT.

Please click here to keep your Wonkette going! Maybe one day we will find you a NiceTimes story!