Now It Is Ted Cruz Who Is Poor Persecuted Galileo, And Climate Scientists Are The Church 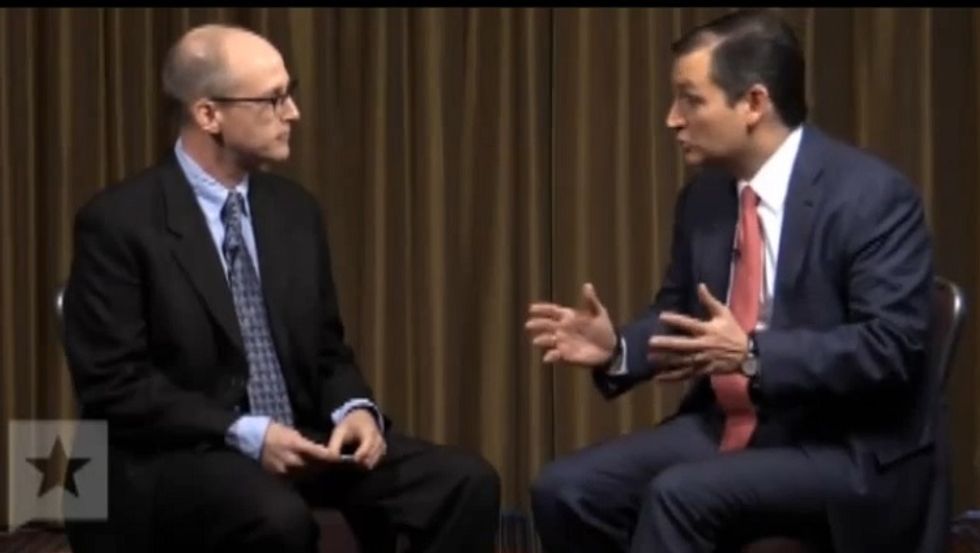 In a bravura performance Tuesday, Ted Cruz crammed an astonishing number of lies about global warming into four minutes of a longer interview with Texas Tribune reporter Jay Root. It was really pretty impressive! Cruz asserted that "we should follow the science and follow the evidence" on climate change, and then proceeded to reel off a whole catalogue of distortions, half-truths, and outright lies that have been refuted again and again. He hit just about every space on the Climate Denial Bingo card; for the sake of our sanity, we won't refute everything he said, just some of our favorite stretchers.

Cruz began by saying that "global warming alarmists" ignore the "actual facts and the data" about climate, asserting that "satellite data demonstrate that there has been no significant warming whatsoever for seventeen years" -- a beautiful bit of cherry-picking that should win Mr. Cruz a seat on the Senate Agriculture Committee. Of course, while it takes only a moment to assert, you need an entire article to explain why it's essentially a lie. For one thing, 17 years is hardly anything in climate data that show a steady rise over the past two centuries, and there definitely has been warming -- mostly in the seas, rather than at ground level. NASA, which owns the damned satellites, disagrees with Cruz on this too. It's a bit like claiming that because someone who's dying of cancer has a period of slower tumor growth (in one area, for that matter), they were never sick at all.

Next, Cruz mentioned that in the 1970s, some scientists warned of "global cooling" -- never mind that it was never really taken seriously in the scientific press, even if Newsweek did have a panicky cover story about it.

And then Cruz gets to one of our own favorite myths, the idea that because climatologists and activists realized that the earth isn't really warming (and it definitely is), they adopted the term "climate change" to replace "global warming." Oh, hey, wrong again! Both terms have been around for decades, and while they're not precisely interchangeable (since warming in some parts of the globe can cause weirdass weather elsewhere), the last decade and a half's preference for "climate change" was driven not by the scientific community, but by the George W. Bush administration -- good old GOP doublespeak guru Frank Luntz recommended using the phrase in a 2003 memo on how the administration should talk about the environment:

It’s time for us to start talking about “climate change” instead of global warming and “conservation” instead of preservation.

So yeah, "they" changed the terminology -- but "they" weren't the scientific community.

In addition, "global warming alarmists" use fear and intimidation to scare people by labeling them deniers. We're thinking this has something to do with all the denials of scientific reality that deniers do, maybe. Cruz follows that with a related whopper:

Today, the global warming alarmists are the equivalent of the flat Earthers. It used to be 'It is accepted scientific wisdom: the Earth is flat,' and this heretic named Galileo was branded a denier!

That's pretty cute! Even while saying we should be "guided by science," Cruz really argues that we shouldn't trust science at all, because what non-scientists in the Catholic hierarchy thought was true at one time is now known to be false. Funny, that argument sounds rather familiar, almost as if Glenn Beck had said the same thing about vaccines earlier this year. Or every loon with a disproof of evolution or relativity, for that matter.

So, hey, that's pretty good! Depending on your criteria, that's six or eight separate lies in just four minutes, from a man who says he's been "following the science." He didn't manage to make even a single statement that was unambiguously true.

And now a word from a real scientist, Neil deGrasse Tyson, who said in Florida on Monday that the real enemies of getting anything done about climate change aren't so much the polluters and big businesses -- they're just going where the market takes them, and where the government lets them go. No, the biggest problem is voters who keep electing climate-denying idiots like Rick Scott and Ted Cruz:

Tyson has a point: a poll last year found that Americans are, in general, less concerned about climate change than people in many other parts of the world. And though most Americans believe climate change is happening, many don’t fully understand why.

Of Gov. Scott's idiotic (but hilarious) ban on state employees even using the words "climate change" or "global warming," Tyson said, “The science is not political. That’s like repealing gravity because you gained 10 pounds last week.”

Tyson also had some choice words for Cruz, regarding his badgering of NASA Administrator Charles Bolden by suggesting that NASA has no business studying the climate:

"If you’re going to ignore Earth -- and no one else is paying attention to Earth the way NASA is -- you could be planting the seeds of your own destruction,” Tyson said. “It’d be different if most of [NASA’s budget] was spent on Earth, but that’s not the case.”

Wouldn't you just love to see Neil deGrasse Tyson talk to Ted Cruz about climate for an hour? Since Tyson will soon be moving his Star Talk program from radio to TV, on the National Geographic Channel (which is, yes, owned by Fox -- go figure), maybe Tyson's booking people could bring the Senator on for a little education session.