Now Ted Cruz Fancies Himself A Kennedy, Like John Or Paul Or Ringo Maybe 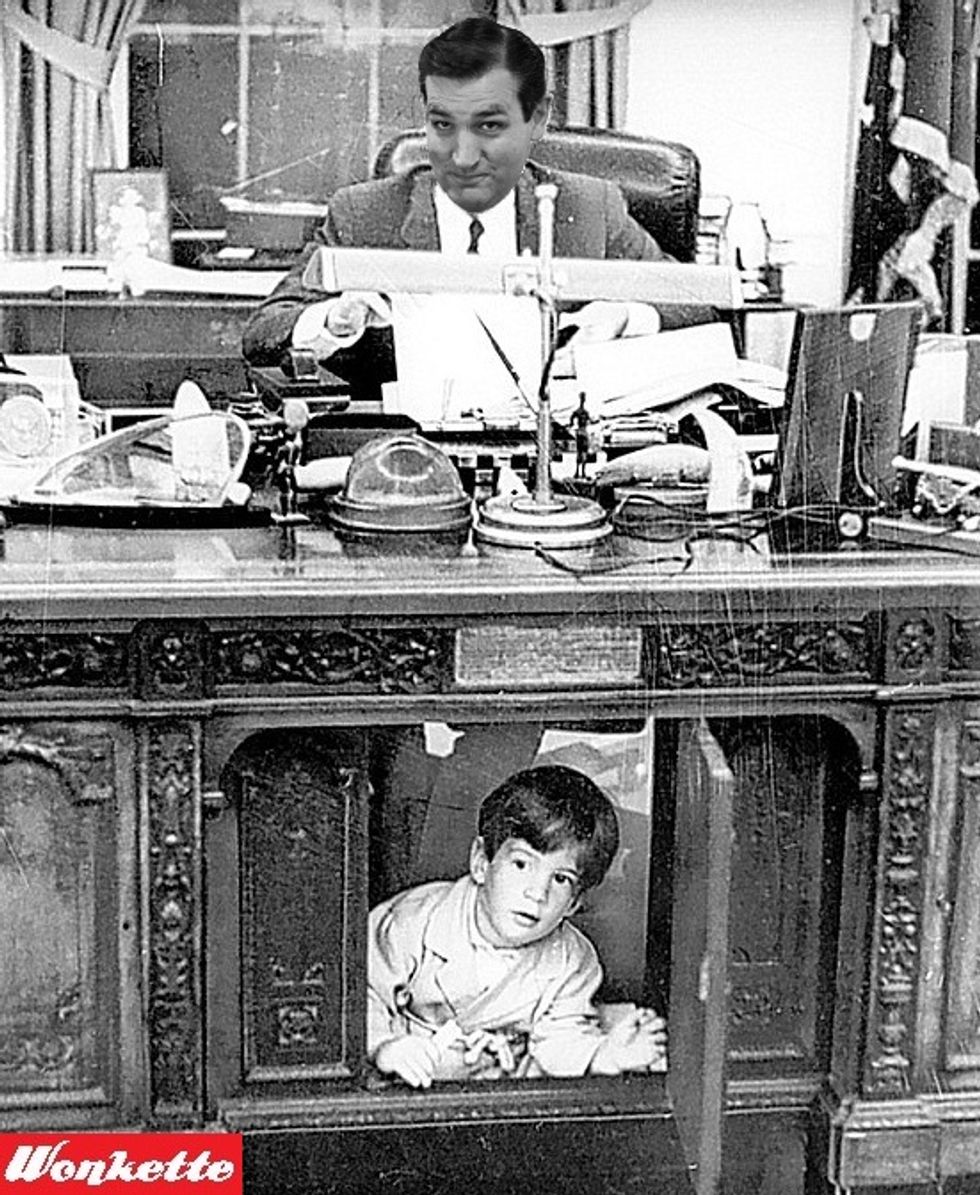 Ted Cruz believes he is many things: the reincarnation of Ronald Reagan; spokesman for Israel and all the Jewishes; an Ivy League-trained master debater genius wunderkind; and Jesus Christ hisself. Now he's adding Great Conservative Republican Hero John (?) Kennedy to his fan-fic collection.

Ted Cruz on Sunday swapped his tinge of Texas twang for an attempt at an upper-crust Boston accent as he asserted here in New England that former President John F. Kennedy would be a Republican today. [...]

"He stood for religious liberty, and he would be tarred and feathered by the modern Democratic Party.”

[contextly_sidebar id="FxFlkwZozjSCH3fUvrDdH77725bKLAZk"]We are not going to list all or even any reasons that, contrary to conservative revisionist history, President John Kennedy was not a Republican. Been there, done that, you're welcome. However, we will take this opportunity to point out that Cruz, in his eagerness to prove his JFK-osity-ness, managed to cowboy boot-stomp all over his own wang, quelle surprise!

“As JFK said,” Cruz continued, dropping his “r’s” as he aimed to assume a New England accent, “’Some men see things as they are and ask, Why? I see things that never were and ask, why not?’ These are the principles that work.”

Quick, you smart-ass olds out there who are ready to tar and feather John Kennedy, for his rightwing conservatism, tell us what's wrong with that stellar JOHN Kennedy impersonation, besides everything? Oh, that it wasn't John Kennedy who said it?

George Bernard Shaw once wrote, "Some people see things as they are and say why? I dream things that never were and say, why not?"

That would be uber-conservative brother Bobby, launching his candidacy for the Democratic presidential nomination in 1968, by quoting someone else who was also not John Kennedy, but who, were he alive today, would no doubt be a conservative Republican Cruz voter for sure.

As you ancients might recall, Not-John's words immediately preceding his Shaw reference were about carpet-bombing the Nam and making the sand glow.

Or not. Perhaps Ted Cruz was confusing himself with another Kennedy brother?

[contextly_sidebar id="5hiPqSjoVwTtbsA3UqP2qnUGxmtooG8w"]Yes, that's it. Cruz must have been thinking of Ted Kennedy, the conservative lion of the Senate. Or, counterpoint, Ted Cruz is not like any Kennedy at all, nor Ronald Reagan, nor Jesus, nor the modern-day leader of the Hebrews. He's just a flaccid bacon-wrapped, flabby-brained, black-hearted jackass. From Canada.