NRA: Despite Living In House Full Of Guns, More Guns Could Have Saved Kasandra Perkins 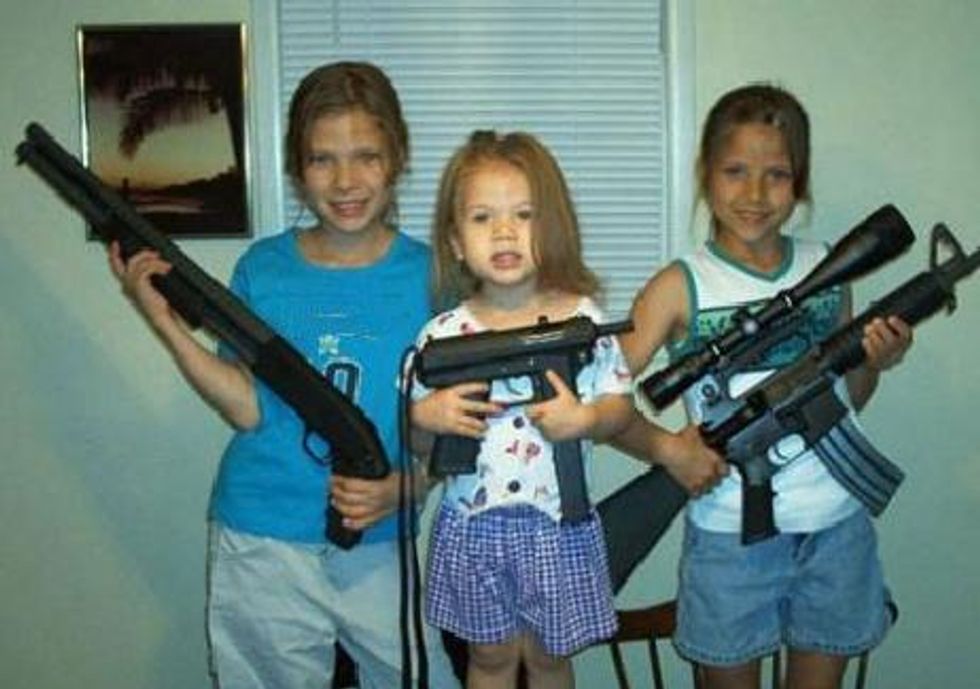 In the ritualized aftermath of a high-profile shooting, there are certain things that absolutely must happen. Obviously, it is very important to explain how thevictim's poor choices led to the tragedy, so that We At Home can feel marginally safer and reassured, because we would never make those bad choices. And, of course, there's the inevitable fairy tale spun by the National Rifle Association: If only the victim had been armed, she wouldn't have been a victim. So when NFL linebacker Jovan Belcher shot and killed his girlfriend, Kasandra Perkins, last week, the only surprise was that it actually took NRA president Wayne LaPierre several days to come out with his carefully thought-out analysis:

“The one thing missing in that equation is that woman owning a gun so she could have saved her life from that murderer,” LaPierre told USA TODAY Sports on Thursday [...]

“Owning guns is a mainstream part of American culture and it’s growing every day. My God, there’s nothing more mainstream in this country than 100 million Americans who own firearms.”

Golly, if only Kassandra Perkins had known the security of firearms ownership! She might still be alive!

There's only one small problem with that notion. Perkins and Belcher were both avid shooters, and the couple owned as many as eight guns.

The night before the shooting, Belcher exchanged text messages with a former college teammate, joking about how he was ready for any future boyfriends of his 3-month-old daughter:

"Yea man...I got about 8 guns now, from hand Gunz to assault rifles for her little bf's."

Ha-ha, he was just kidding about waving a gun at his daughter's boyfriends, of course. That's just a wacky exaggeration that he'll never act on, because the next morning he shot her mom nine times and then shot himself dead.

Belcher was not alone in his enthusiasm for guns, either:

Belcher and Perkins, Brianne York, [a friend of Kasandra Perkins] says, enjoyed going to gun ranges together. Once, when York was at the couple's house, she noticed a handgun on the kitchen table. "I guess they forgot it was out," she says. [Devene] Dunson-Rusher, [another one of Perkins's friends], recalls once seeing a rifle leaning against a chair in the room she called Belcher's man cave.

It almost sounds as if Wayne LaPierre might be wrong about the miraculous bubble of personal safety that surrounds "a woman owning a gun," doesn't it? Clearly, she should have had her gun with her at 6:30 AM, so she could have a shootout with Belcher in front of their infant daughter and Belcher's mother, who almost certainly would not have been hit by a stray bullet.

Also, if you truly want to be safe, you need to actually carry a gun with you at all times, even at home, as advocated by this not-at-all-paranoid writer, who notes that merely having a gun is not the same as having a gun in your hand:

Oh they have a gun. Most have several. Know how to shoot them too. But they don’t have immediate access to a gun in their home. Which is the same as not having a gun. They all think they’ll be able to run to their gun at the start of a home invasion. That is one seriously dangerously delusion.

You think the bad guys are going to make an appointment? Knock three times? Wait while you prepare for them? Allow you to secure your kids before you get your gun? I wouldn’t bet my life on it. And neither should you.

Obviously, a cold-eyed realist must be armed every waking moment -- "A perimeter alarm helps me sleep like a baby (when I do)" -- because you never know when a Bad Guy is going to crash through your door and need a face full of lead. Oh, sure, he does close by acknowledging some possible practical issues, but you want to be absolutely safe, don't you?

There are plenty of “common sense” objections to home carry. It’s unsafe for the kids (definitely not true if you keep your gun on you at all times). I’ll look like a nutcase (who’s coming to dinner?). Etc. And there’s one common sense reason to man (or woman) up and carry a gun in your home: if you need it, there it is.

As John Lennon said before he was shot to death, life is what happens when you’re making other plans. Semper fi baby. Semper fi.

John Lennon was so dumb. It's just common sense: If we all carried guns at all moments, only bad people would die.

OK, and occasionally children and spouses and delivery people who startle us. But they should have been prepared for a gunfight, right?

Check out Wonkette on Facebook and Twitter, and if you promise not to track him down and shoot him, Doktor Zoom is on Twitter, also, too.