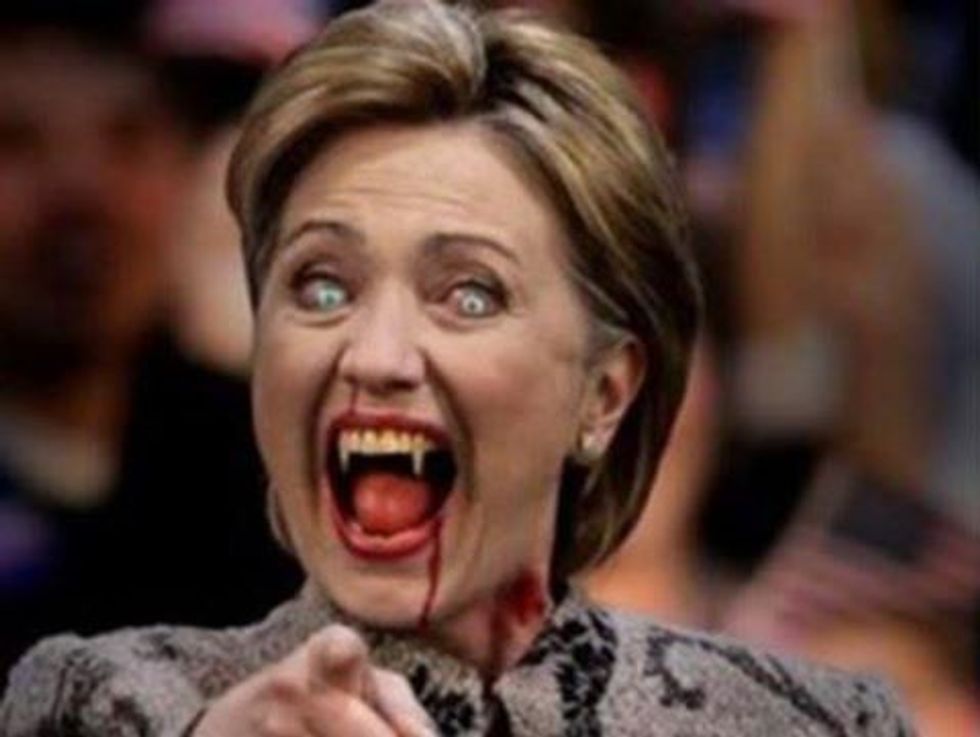 The corpse that was America's liberty until President Obama killed it is not even cold yet, but the National Rifle Association is already warning us of the extra-death of liberty that lies ahead, since Hillary Clinton "has formally declared her intention to assume the office of president of the United States." (We assume she intends to do this by winning the presidential election, like she said, but maybe she's just going to assume the office without the farce of democracy, so she can get right to extra-deathing our liberty. That's probably the plan.)

The NRA's irrefutable article, titled "Hillary's Long Con," proves that Clinton has been planning, for decades, to destroy all the guns in America, and in 2016, she will at last be positioned to implement her evil scheme. The reason is obvious:

Despite her "tortuous and snaky convolutions" over the years, and her claims "that she grew up shooting, that she hunts ducks (with a rifle, no less!) or that she doesn’t want to take anyone’s guns away," her support for certain regulations on gun ownership that the overwhelming majority of gun owners also supports, makes her intentions perfectly clear. And not only does she plan to wage an all-out war on gun ownership, but she's going after gun owners and America's children too:

As Hillary Clinton told a group of New York school students in 1999, “It is really important for each of you [kids] to make sure you stay away from guns. If you have guns in your home, tell your parents to keep them away from you ...”

That kind of blatant disregard for parents' freedom to leave their guns laying around where their young tikes can discover them and oops! shoot their friends and family dead is exactly why Clinton must be stopped now, before it is too late, even though it's already too late because she's been working on this since the '90s, "much in the spirit of her husband’s deputy attorney general, Eric Holder, who called for brainwashing American youth against guns." (Oh, for the days when Eric Holder was merely President Obama's attorney general, helping him to implement the evil scheme to seize everyone's guns, by not seizing their guns, just to "lull gun owners to sleep" before then seizing their guns. Still waiting for that to happen.)

Worse still, when Clinton isn't also lulling gun owners into a false sense of security, she is being racist against them, with her slurs:

That was in reference to the minority of people who do not support universal background checks. But when polling shows that only 92 percent of voters, including 92 percent of gun owners, support such tyranny, who is Clinton to criticize the silenced single-digit minority?