NSA Leaks: Too Many Dare Call It 'Treason' 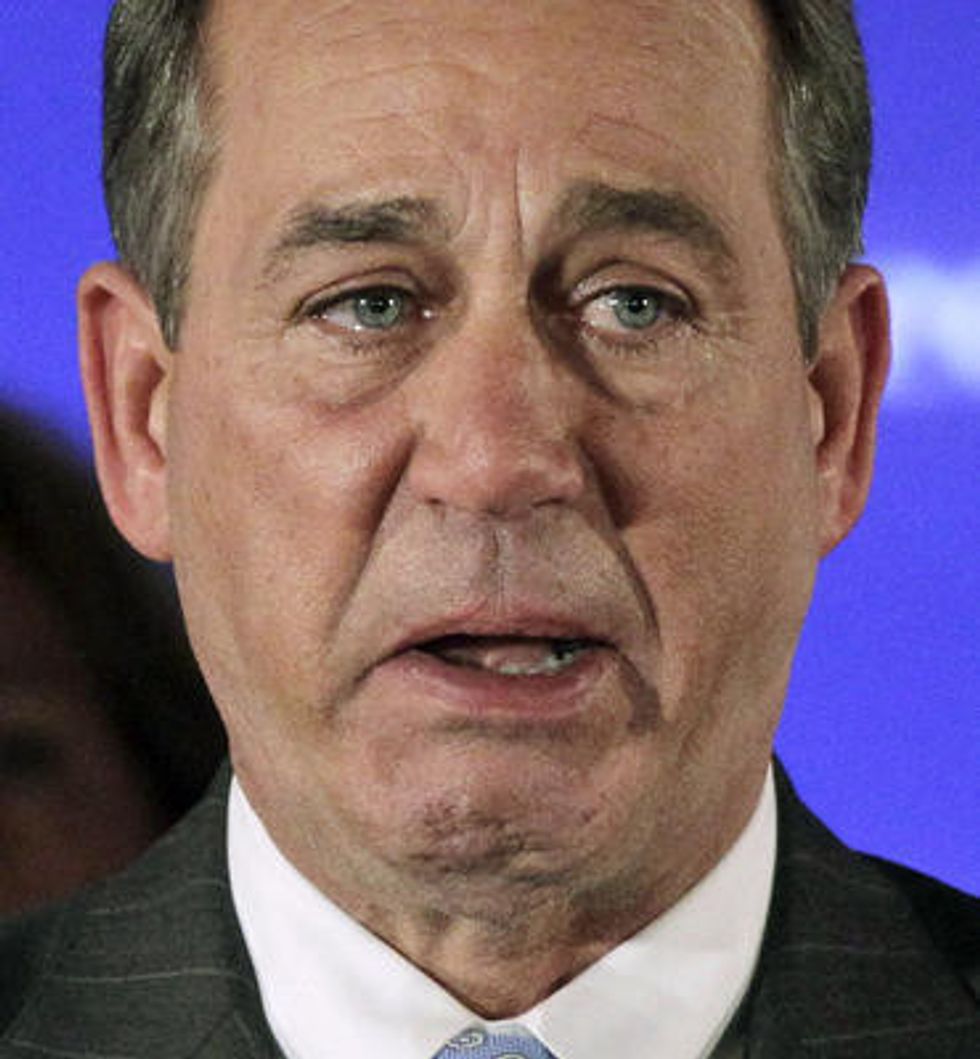 Lord but is this NSA shitfuffle giving some of our elected officials and political figures a chance to do their best impressions of spaghetti-western-era Clint Eastwood (which for our money is the best era Clint Eastwood - we would rather forget about the old-man-ranting-to-an-empty-chair era.) Let us take a look at this children's treasury of emotional children talking tough about shooting the messenger while ignoring the message.

This is House Speaker John Boehner, a.k.a. Orange Julius, a.k.a. Weeping Boner, a.k.a. Julius Caesar to Eric Cantor’s Tillius Cimber as Soon as Cantor Can Get a Dozen Tea Partiers to Walk onto the House Floor with Daggers Hidden Under Their Tunics.  On Tuesday Johnny B. went on “Good Morning America” and made Snowden out to be the biggest criminal since Alger Hiss:

"The president outlined last week that these are important national security programs that help keep Americans safe and give us tools that help fight the terrorist threat we face," Boehner said. "The disclosure of this information puts Americans at risk. It shows our adversaries what our capabilities are. And it's a giant violation of the law."

We will concede that leaking this info was likely a violation of some law or other. But “traitor” is a loaded word for the Speaker of the House to throw around. It implies Snowden has actively worked with America’s enemies to harm the country. Benedict Arnold was a traitor. Robert Hanssen, the FBI agent who sold secrets to the Soviets and Russians for 22 years, was a traitor. Edward Snowden revealing the scope of a program that most people, including the smarter terrorists, probably already assumed existed in some form or another is not treason.

Maybe Weeping Boner was playing to the nutbar wing of the Republican Party (a.k.a. the Republican Party) which for our purposes can be represented by John Bolton and his magnificent walrus moustache. Yesterday John Bolton opened his mouth hole underneath that moustache and words leaked out of it, among them “traitor,” “act of war against the United States,” and the question we are obviously all asking, “Who died and made him king?” John Bolton, ladies and gentlemen, the man who makes the Mean Girls sound measured and thoughtful.

In the spirit of bipartisanship, we present Debbie Wasserman Schultz, Florida congresswoman and chair of the Democratic National Committee, who has actually voted against some of these government surveillance programs. Nonetheless,

“He should be extradited, arrested, and prosecuted,” Wasserman Schultz said. “That’s exactly what should happen to him because he violated the law. He violated America’s trust. He jeopardized millions of Americans.”

See? Both sides do it! And by “do it” we mean “demagogue until all Americans are in a constant state of bed-shitting terror.” We’re so glad these people are in charge.

But for pure comedic gold, we can’t beat this George W. Bush-level malapropism from David Axelrod:

I mean, he's a whistleblower who then blew the country.

Whoa! Only someone like David Axelrod could make a blow job sound like a bad thing! We think Axelrod meant to say that Edward Snowden sodomized America, with a toilet plunger, leaving us bleeding from a thousand rectal splinters. And now the terrorists have won.

Finally, just as we were finishing this piece, Alex popped into the chatcave with this little number about how Snowden is now telling a newspaper in Hong Kong (which is part of China for fuck's sake) about all the NSA hacking directed against various Chinese entities on the mainland. Which we assumed was happening, just as we assume the Chinese are trying to hack us, but Jesus H. Christ in a surveillance van, as Alex asked, what does that have to do with our government maybe violating the civil liberties of its own citizens? Snowden is quickly dissipating whatever sympathy we built up for him while writing this post. But criminal dickishness is still not treason.