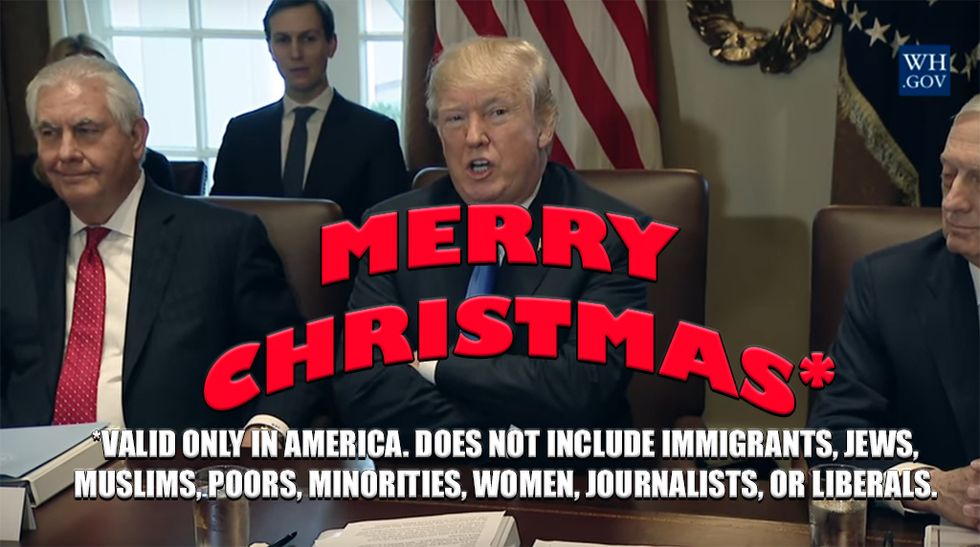 Happy Holidays, Wonketariat! It's your last full day before a lazy weekend, unless Trump fires Robert Mueller. Here's some of the things we may be talking about today, but first, have some meerkat nice times!

It would appear that Trump's White House counsel knew immediately that Mike Flynn lied to federal investigators, and subsequently warned Trump, which could be evidence of obstruction of justice. WHOA, if true! [Morning Maddow!]

The top lawyer at the FBI, James Baker, is being reassigned by Director Christopher Wray for something that may or may not be leaking like a Russian pee hooker.

Congress voted to avoid a government shutdown yesterday through Jan. 19, but nobody got anything on their Christmas list.

The House managed to pass an $81 billion disaster relief package for Texas, Florida, Puerto Rico and California, but the Senate is refusing to pass it before this year as it was written on the back of a dirty cocktail napkin in crayon.

Be aware of an attempt to brainwash the masses as conservative super PACs are dumping millions of Ameros into a PR blitz for the Trump/Ryan tax cuts (for the super rich).

Big businesses seeking to curry favor with their new God-Emperor are announcing pathetic pay raises and bonuses for the peasants who've suffered for so long under the tyranny tax regulations.

Yesterday Princess Ivanka graced the American people with her presence to talk about taxes, and how they're, like, so much better now, and stuff -- prompting tax professionals to scratch their heads and wonder what the fuck she's talking about.

Trump is claiming he is "imploding" Obamacare, which is factually inaccurate as enrollment vastly exceeded expectations, but Trump and Republicans may yet rue the day they killed the individual mandate.

Senate Republicans are still quietly plotting to screw with Obamacare, but they're being careful not to get hopes up.

Before leaving, Congress slipped a c-note in the pocket of Tiny Tim and warned him not to get sick until next year as they kicked funding CHIP into next year.

There's talk about separating parents from children coming across the Mexican border, and use HHS data to target parents attempting to regain custody of their kids.

Senate Republicans finally released stats on harassment claims, but the data doesn't name any names, showing only that Congress is full of assholes.

Roy Moore still can't take a hint and is trying to shame Doug Jones by posting an article on bookFace from an LGBT website about Jones's gay son heaping gay praise all over his gay-friendly dad.

After a brutal 128 to 9 vote, the UN General Assembly voted to condemn the US decision to relocate its Israeli embassy to Jerusalem in a non-binding resolution, which prompted ambassador Nikki Haley to call the vote "null and void," and remind Not America that the US is rich with guns and freedom, and they better watch out because Santa Trump is making a list of enemies and checking it twice.

In his farewell address on the Senate floor, Sen. Al Franken criticized the extreme partisanship swallowing the political process, stating, As I leave the Senate, I have to admit that it feels like we’re losing the war for truth. Maybe it’s already lost. If that’s what happens, then we have lost the ability to have the kinds of arguments that help build consensus.”

RNC chairwoman Ronna ROMNEY McDaniel is warning that the Republican party is bleeding out women voters from their wherevers, and they could be facing a serious crisis in 2018.

Trump's advisors decided to stop stabbing each other in the back and instead fight one another for his affection during an "intense" strategy session at the White House yesterday.

The new US Ambassador to the Netherlands, Pete Hoekstra, has only been in office for a week and he already created an international incident when he accused a journalist of "fake news," and was immediately called out as an ignorant, Islamophobic liar.

A federal judge dismissed some lawsuits alleging Trump is violating the emoluments clause for lack of standing, but the judge noted that this is more of an issue for Congress.

The EPA is losing hundreds of scientists under the leadership of Scott Pruitt, and it's only going to get worse.

The UAE is quietly spending many Ameros to create its own CIA with ex-spooks in order to pre-emptively combat terrorism, but there's concern that they may be going way too far way too fast. Consider this your homework assignment.

Boris Johnson and Sergey Lavrov got into a hissy fit during a joint presser when the subject of Russian election fuckery was brought up. Johnson called Lavrov on his bullshit to his face as the Russian foreign minister denied trying to screw with elections in other countries. Cheers, mate, maybe a bumbling bully foreign minister wasn't the worst idea after all.

Russian hackers have been targeting journalists to discredit reporting deemed critical to the goals of Moscow, and other hacking groups.

As staffers and aides run from the Hill, Trump is eyeballing TV talking heads to fill empty seats.

Internal emails leaked from Miss America executives show how they're repugnant fat-shaming trolls who once referred to former pageant winners as "cunts," ruined careers, and constantly thwarted Gretchen Carlson's attempts to not have the show run by a bunch of assholes.

Poor Jill Stein was on Tucker Carlson bemoaning her involvement in Trump-Russia probes as "punishment" for being such an inconvenience to Democrats during the 2016 election, casually glossing over her opportunistic grift immediately after the election.

Dame Peggington fondly reminisces on the days she kept cool with Coolidge at Gatsby's grand soirées, and says the guttural, fear-filled laughter will be muted by the sound of golden showers raining down from the corporate heavens. [Archive]

The CEO of an overrated pizza chain is stepping down after blaming the bad sales of his crap food on the sportsball players protesting police brutality.

Carter Page failed to obtain his PhD twice; but he says that he is not A Idiot, it's just that book smart school people have got it in for him.

And here's your morning Nice Time! CAT BURGLARS! (Get it?!)

We're 100% reader supported, so give us the gift that keeps on giving: Money. (Please!)

Follow Dominic on Twitter and swap pics of Chinese food, kitties, and cheap beer over the holidays!