O GOD MAKE IT STOP! Your Daily Round Up Of Crazy White House Shit! 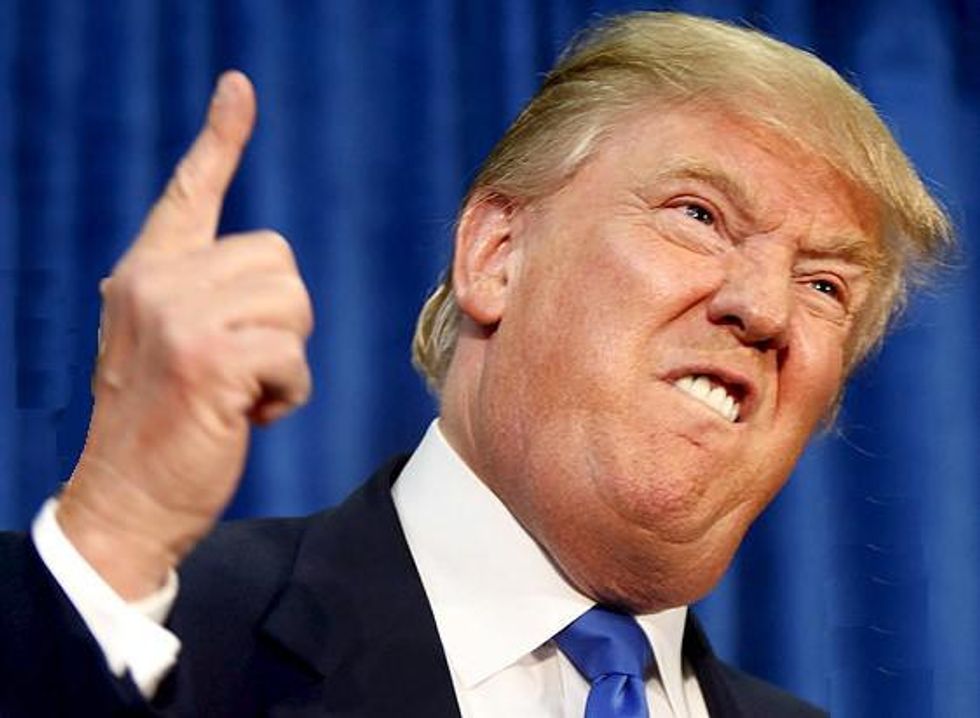 THIS WEEK! HOLY SHIT! We're ever so grateful for the Flynn indictment on Friday. But Lordy, how can there be so many newses? So, here is your Sunday morning Trump-Flynn-Russia-Collusion-Gate round up, because if we wait more than 36 hours, we'll be writing posts that are one millionty words long. Please refer back to our excellent posts on Friday for background on Michael Flynn and his sexxxy Russian funtimes plea deal.

On December 29, the Obama administration expelled 35 Russian operatives from the US and imposed sanctions on 4 high-ranking Russian officials in response to Russian hacking of the 2016 election. Which seemed perfectly reasonable, except in Trumpland where everyone was sure it was just a ploy by the Kenyan Muslim to delegitimize Trump's amazing electoral victory.

Yeah, we know she said, "trump will have difficulty improving relations with Russia which has just thrown the election to him." Which does sound like an admission of collusion, except that K.T. McFarland is complete moron. She was Flynn's flunky, and McMaster booted her out of the White House in April as soon as he wrested control of the NSC back from Steve Bannon. Trumpland pinky swears that McFarland meant, "We can't undo sanctions without looking like we're favoring Russia while all those loony Demoncrat libs are fantasizing that Russia threw the election for us when everyone knows Hillary is the REAL Russia!" And just this once, we kind of believe them! K.T. McFarland is barely competent to microwave popcorn, much less collude to throw the election.

More importantly, though, the email reflects the Trump team's inability to see foreign policy as anything but an extension of the battle between Trump and Obama/Hillary. Obama was lying about Russian interference, UNLESS he was telling the truth and just trying to get Trump to trip up and say something stupid. Donny was all ready to take Vlad furniture shopping, but he'd never GET THERE if Obama cockblocked him by getting into an escalating sanctions war. UNFAIR!

Luckily, Trump had Mike Flynn, world's greatest wingman, to whisper sweet nothings in Russian Spy/Ambassador Sergei Kislyak's ear until he dropped the idea of retaliating altogether. According to the indictment, Flynn spoke repeatedly to members of the Presidential Transition Team at Mar-a-Lago on December 29 about his plan to negotiate with Putin's representative. After the Russians agreed not to enact retaliatory sanctions, Trump tweeted his thanks directly on the 30th.

Great move on delay (by V. Putin) - I always knew he was very smart!

The president's most excellent lawyer, Ty "This Is Fine" Cobb, admits that they sent Flynn -- “it would have been political malpractice not to discuss sanctions” -- and he's only sad that Flynn lied about it to the White House and the FBI. So, to summarize:

Barack Obama told Trump that Flynn was a bad hombre, and Sally Yates told Don McGahn TWICE that Flynn was compromised, but those sissy liberals are not the boss of REAL MAN Donald Trump! Flynn remained Trump's national security advisor until February 13, a full month after the Washington Post first reported that Flynn had discussed sanctions with Kislyak in December. The very next day, February 14, Trump asked Comey to "let this go" because "Flynn is a good guy," and how sad they had to fire him for lying to Mike Pence. Was it obstruction of justice? Or just an inexperienced politician expressing his hope that his buddy would get out of a jam?

I had to fire General Flynn because he lied to the Vice President and the FBI. He has pled guilty to those lies. It is a shame because his actions during the transition were lawful. There was nothing to hide!

He just ... he just tweeted it out! He just acknowledged he fired Flynn for lying to Mike Pence AND FOR LYING TO THE FBI. He knew Flynn was in trouble for lying to the FBI, and he still asked Comey to kill the investigation! HOLY FUCKING SHIT!

Re lawyer involvement in Trump tweets. The "at-issue" waiver of attorney-client privilege arises when a person justifies his conduct by saying " My lawyer told me to do/say it." That assertion can open the door to inquiring about the content of the attorney-client discussions.1/2

This is a pretty substantial confession to essential knowledge elements of an obstruction of justice charge. https://t.co/UpQfilPVfJ

Has anyone told Trump he has the right to remain silent? https://t.co/PgtorK921Z

So at the time you fired Flynn, you knew he had lied to the FBI??

And then you fired Comey to help Flynn?

He knew Flynn lied to the FBI? That’s news. Fired Comey even though he knew his NSA had committed a crime? Interesting. https://t.co/uNp7P9Xa3Z

After Trump tweeted out that he sure as shit knew about Flynn lying to the FBI when he fired him and asked Comey to "let this thing go," the White House staff did the only logical thing and confiscated Trump's phone.

No, they "fixed" it by telling everyone that actually Trump's lawyer John Dowd wrote the tweet. And while Trump's one superpower seems to be a forcefield that melts the brain of any attorney who comes within ten feet of him, you can color us skeptical on this one. With the possible exception of Ty Cobb, we have a very hard time believing that any attorney who wishes to continue practicing law would tweet out an admission of obstructing justice.

Before the lawyer confirms this is true someone should remind him that, if he likes his bar license (and maybe his freedom), his words had better be true. And if it is true, someone should suggest a new line of work. https://t.co/1YW06qQLRK

As a lawyer, I can confirm that I frequently compose tweets confessing to crimes and send them from my clients’ twitter accounts. It’s the first thing you learn at law school.

The “my-lawyer-wrote-my-tweet” defense seems like a privilege waiver and an invitation to the Special Counsel to interview or subpoena the lawyer. https://t.co/zffDIC9ODF

Re lawyer involvement in Trump tweets. The "at-issue" waiver of attorney-client privilege arises when a person justifies his conduct by saying " My lawyer told me to do/say it." That assertion can open the door to inquiring about the content of the attorney-client discussions.1/2

So you're saying this is NOT good for the president? Hmmmmm.

Trump responded by howling and throwing his own poop. As is his habit.

Congratulations to @ABC News for suspending Brian Ross for his horrendously inaccurate and dishonest report on the Russia, Russia, Russia Witch Hunt. More Networks and “papers” should do the same with their Fake News!

So General Flynn lies to the FBI and his life is destroyed, while Crooked Hillary Clinton, on that now famous FBI holiday “interrogation” with no swearing in and no recording, lies many times...and nothing happens to her? Rigged system, or just a double standard?

So gravitas! Much presidential! Is the goon squad gearing up to You're Fired Mueller this week? HOLY SHIT! WE'RE ALL GONNA DIE!

Okay, Wonkers! We are going to go lie down until the room stops spinning. YIKES!

Please support us by clicking here! This shit is CRAZY!