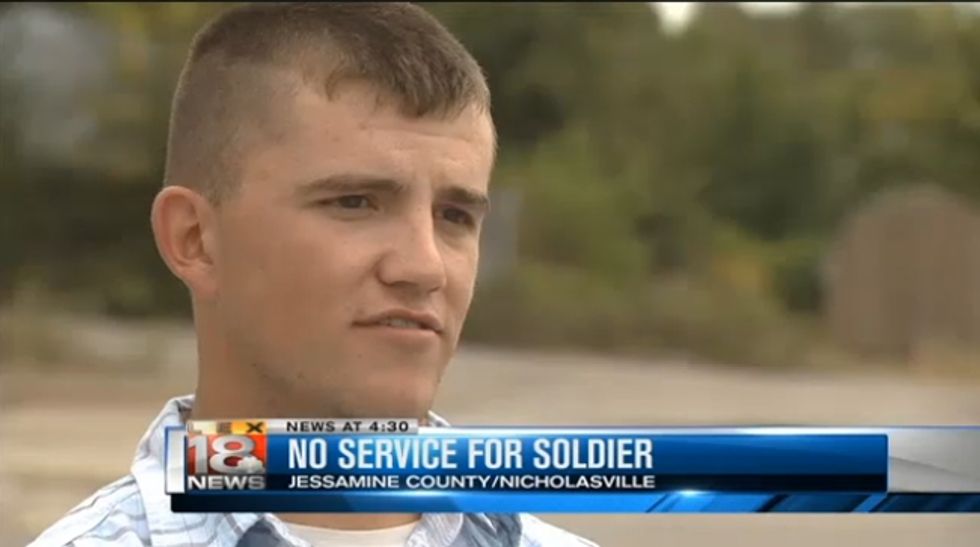 Looks like the great patriots of that lovable anti-government paramilitary group the "Oath Keepers" are expanding their self-defined mission from protecting wildcat miners on public land and deadbeat welfare ranchers into the exciting world of organizing consumer boycotts! These brave defenders of the Constitution are all het up about a September incident at a Waffle House in Nicholasville, Kentucky, in which National Guard member Billy Welch was asked to please leave his holstered handgun in his car, since the restaurant chain has a policy against open carrying of weapons by anyone but law enforcement officers. Welch later told TV station WLEX that no sir, he just couldn't abide the thought of eating a meal -- or whatever it is you get at Waffle House at 2 AM -- without his trusty gun:

"I don't feel comfortable taking my firearm away from me. I always keep it with me and they said, ‘it's one of our policies.’"

Welch said that he didn’t think too much of it, just told the waitress that he could not leave his firearm outside.

"You know, if I can't have my firearm, then I can't be here,” said Welch. “I walked inside to the other waitress. I said, 'thank you, but no thank you ma'am. I'm gonna have to leave.'"

A young woman who saw this brazen disrespect of both a uniformed National Guardsman and the Second Amendment wrote an impassioned Facebook post about it, the story made it onto the GunBlogosphere, and eventually the Oath Keepers decided it was time to launch a boycott of the Waffle House chain, for disrespecting the military and the Holy Second Amendment. Oath Keepers blogger person David Codrea vowed that he will never set foot in a Waffle House again "until they change their policy, publicly apologize, and begin proactively supporting and promoting the right to keep and bear arms." That last bit is a nice touch: Not only does the chain have to allow open carry, it has to promote it, possibly by offering smothered and covered 9 millimeter rounds as a side dish.

Looks like Waffle House is done for, probably. Codrea is certain that once gun-humpers withdraw their support, the place is doomed:

Waffle House would actually be a great candidate to single out and make an example of. If they dig their heels in and go belly-up, who cares? And if they end up doing the right thing, it will be an in-your-face victory

And then he fantasizes about how the Moms Demand Action ladies will cry bitter, bitter tears, which seems unlikely, given that Target stores banned open carry in response to pressure from the Moms. As far as the success of boycotts by angry gun-humpers goes, we'd note that Chipotle is still in business. But maybe Waffle House caters more to the Outraged Gun Fondler demographic.

In addition to restating that the Waffle House franchise in Nicholasville does indeed bar open carry, franchise owner Ray Daniels issued a statement explaining that media reports of the incident left something out: A few weeks prior to the night he was asked to put away his gun, Billy Welch "was an active participant in a fight on the premises" of the restaurant, and was "restrained and taken off the premises by off-duty police officers that were eating in the restaurant at the time." The Oath Keepers blog doesn't buy this at all, insisting that, as with so many of the conspiracies aimed at taking away our guns and impurifying our precious bodily fluids, Daniels's claim was nothing but a "diversion to mask discrimination against all gun owners."

The other thing that leaves us scratching our heads like Columbo about the incident is why Mr. Welch was carrying what seems to be his privately owned handgun while in uniform. WLEX was careful to get a dramatic shot of the holstered weapon when they interviewed Welch, who was then wearing his civilian clothes:

Yr Wonkett is no JAG, but as more than one comment thread on stories the Welch/Waffle House standoff has noted, the Army frowns on uniformed soldiers packing their personal shootin' irons, according to Regulation 190-14, section 2-6 b:

The introduction to the document also notes that this section "prohibits the carrying of non-Government owned or issued weapons or ammunition."

To further muddy the question as it's being litigated in Internet comments (which will someday be how all issues are decided in America), following the Chattanooga shootings, Kentucky Gov. Steve Beshear issued an executive order stating that "guard members are permitted to carry weapons when they are on duty" and that those with concealed weapons permits could carry a concealed weapon at Kentucky National Guard facilities and recruiting stations. That doesn't quite answer whether the order applies to privately owned weapons or not; we also have no idea whether Welch was "on duty" while ordering greasy food in his ACUs. If it turns out that he wasn't supposed to be packing personal heat in the first place, we'd imagine that Welch may be in trouble with more than the management of Waffle House.

Let's just hope that he doesn't end up having to answer to the Coca-Cola Company.