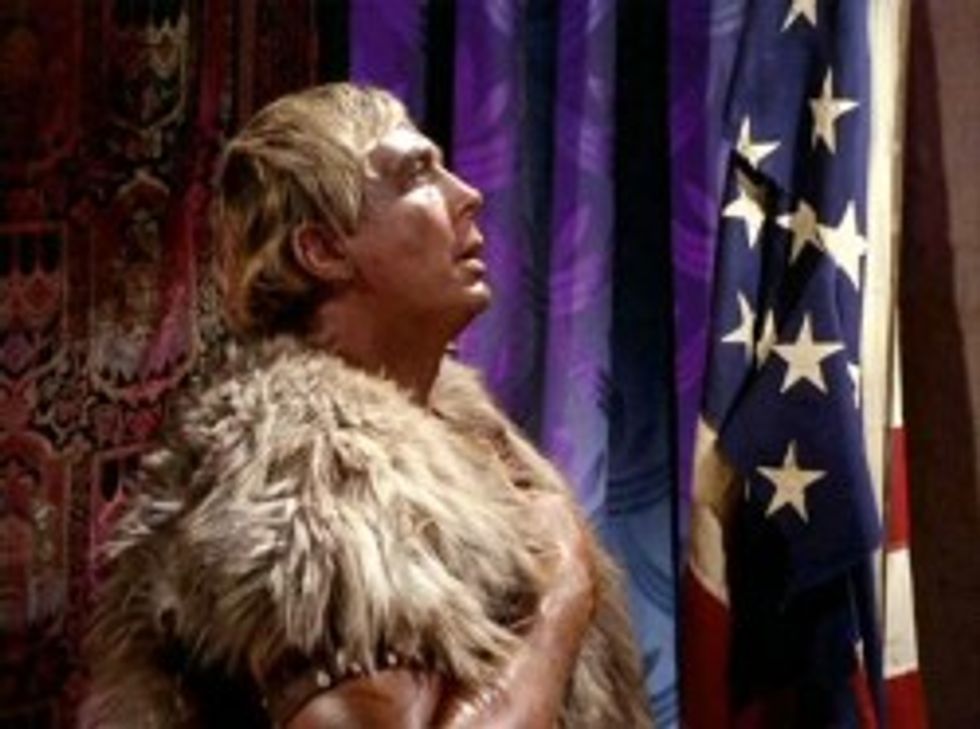 One of the nicer Independence Day traditions in this country is the swearing-in of new citizens by the President of the USA. Jaded though we may be in this modern age of instant worldwide communications, 24-hour news cycles, andflying robotic kittycat death drones, we nevertheless actually get a little misty-eyed at the idea that, on the holiday celebrating the nation's founding, the actual freakin' PRESIDENT welcomes a bunch of new citizens to enjoy the full rights and responsibilities of being Americans. It's really kind of awesome.

Ah, but not so fast, you sentimental goons! What if that POTUS is himself maybe an illegal alien (we're not saying he is, but the question has been raised by some) who thinks that maybe it would be a good idea to not deport every last foreign-born child ever? Then we are talking about an entirely different kettle of Indonesian flying fish! And even worse, what if that POTUS uses the occasion of that citizenship ceremony to suggest that American immigration policy might possibly be changed? Well, then, friends and neighbors, what you have is an unprecedented politicization of a sacred national day! Breitbart editor Ben Shapiro, that Platonic Ideal of a bloviating wingnut, is terribly sad for America, because "Even on July 4, President Obama can’t stop campaigning." Inconceivable! How could a President even think of the election on the 4th of July in an election year?

On the 236th anniversary of America’s declaration of independence from Great Britain, President Obama has decided to celebrate in a rather unusual way: by politicizing immigration. President Obama trotted out his teleprompter for a naturalization ceremony for military members – a beautiful event. Except that Obama couldn’t keep his yap shut about the DREAM Act:

“We’re still perfecting our union, still extending the promise of America. That’s why, as another step forward, we’re lifting the shadow of deportation from serving — from deserving young people who were brought to this country as children. It’s why we still need a DREAM Act — to keep talented young people who want to contribute to our society and serve our country. It’s why we need — why America’s success demands — comprehensive immigration reform.”

Or, we could just allow America to celebrate these immigrants who wanted to serve their country in the most courageous possible way, rather than turning their citizenship ceremony into a political talking point.

Mr. Shapiro is clearly moved to despair, for no other President has ever campaigned on the 4th of July. For instance, in 2006, George W. Bush would certainly never have lowered himself to flog political talking points at a naturalization ceremony:

I believe this country can be a lawful society and a welcoming society at the same time. We're going to enforce our laws, but we'll also honor our proud immigrant heritage. I support a comprehensive immigration reform... We must resolve the status of millions of illegal immigrants who are here already. We shouldn't be granting people automatic citizenship, nor is it possible to kick people out of the country. There's got to be a rational way, and I proposed a way forward...

Congress is now considering legislation on immigration reform; that legislation must be comprehensive. All elements of the problem must be addressed together, or none of them will be solved at all.

This sort of thing was getting to be familiar territory for GWB on July 4th; back in 2002, he also politicized immigration by signing an executive order granting a shortcut to citizenship for immigrants serving in the military.

Similarly, Saint Ronald Reagan never besmirched our national holiday by mentioning politics. He did it on July third, 1987 instead!

Our administration has argued in the courts that if the Government takes private property through regulation, the "just compensation'' clause of the Constitution requires that the owner must be duly paid... Property rights are central to liberty and should never be trampled upon...

The centerpiece of the Economic Bill of Rights, the policy initiative we launch today, is a long-overdue constitutional amendment to require the Federal Government to do what every family in America must do, and that is live within its means and balance its budget. I will again ask Congress to submit a balanced budget amendment to the States.

See? Not political at all. Also, Saint Reagan would certainly never have proposed the sort of America-destroying policies that Obama has, like when Reagan said, in the 1984 debates,

"I believe in the idea of amnesty for those who have put down roots and who have lived here, even though some time back they may have entered illegally."

Oh, and we all know how America was utterly destroyed after the 1986 passage of the Simpson-Mazzoli Immigration Reform and Control Act, except for the part where America is still not destroyed and the people granted amnesty in 1986 became homeowners, small-business entrepreneurs, college graduates, and taxpayers.

Extra Special Social Science Bonus Feature for Nerds: A 2011 Harvard Kennedy School paper, "Shaping the Nation: The Effect of Fourth of July on Political Preferences and Behavior in the United States." Haven't read beyond the abstract, but it sure looks thinky!