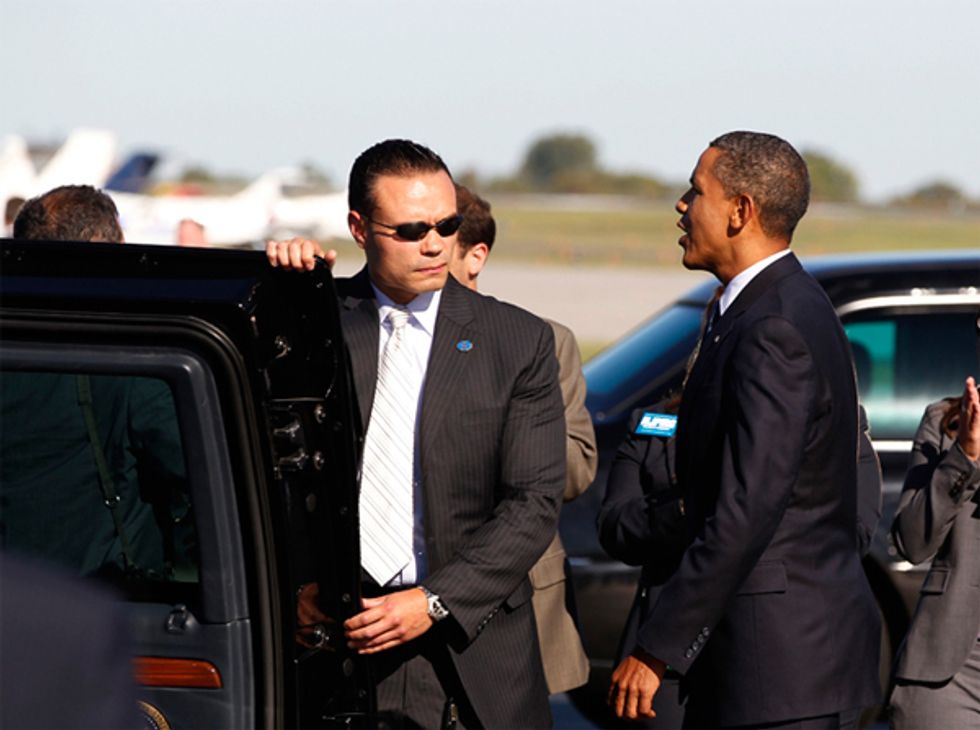 Hey, you know how Obama completely destroyed American credibility by not flying to Paris for that not-quite-a-march "March of Unity" of world leaders earlier this week? Never mind that if he had gone, we'd be hearing nothing but "How dare he waste all our taxpayer moneys gallivanting around with cheese-eaters who weren't even in the actual march!"

It turns out that not only has Obama snubbed Our Oldest Allies the French, he also libeled the brave men and women of the Secret Service, who put their lives on the line for him whenever they remember to put down their personal cell phones. According to Dan Bongino, a former Secret Service agent interviewed by mannequin-faced homunculus Patrick Howley at the Daily Caller, the White House was way, way off base in blaming "security concerns" for the decision not to join the Photo-Shoot For Liberty. Not only was the Secret Service never asked to prepare for a trip to Paris, Bongino wants you to know the Secret Service simply doesn't nix presidential trips like that anyway, and also Barack Obama is a terrible president and a total jerk who's kicking a good agency when its down (albeit after tripping over its own feet):

“He knows there’s nothing the Secret Service can say. They don’t want to hurt the relationship so as a matter of decorum they can’t say anything,” Bongino said. “I imagine what they’re really thinking is, ‘Is this guy serious?’ It’s not an easy job. After the fence-jumper, morale’s not great over there now, but he still says something that is so obviously not true" [...]

"If the president wants to go he goes. The Secret Service doesn’t tell him he can’t go. That’s only in movies.”

[contextly_sidebar id="jroYMuKxNF1HZZens7HCSV35yiBDRWk7"]For example, says Bongino, Obama regularly goes traipsing off to places that are way more insecure than Paris: “Just look at the Mandela funeral which was geometrically worse when it comes to threat and he went to that because he wanted to go." You know, a funeral that was held in a stadium where everyone was scanned with a metal detector. True, there was that weird guy who wasn't actually a sign-language interpreter, but his presence was totally Obama's responsibility, not anything the Secret Service could control, we guess.

Judging from his remarks, you'd never guess that Bongino, a consummate security professional, also happens to be a Tea Partier who has unsuccessfully run for the Senate (2012) and for the House of Representatives (2014); he got Sarah Palin's endorsement for his losing campaign in Maryland last fall. You wouldn't necessarily know he lost from Patrick Howley's description, which has Bongino "galvanizing conservative voters with recent Maryland Senate and congressional runs." We guess it wasn't that electrifying after all.

To Bongino, Obama's slur on the professionals of the Secret Service is only the most recent in a continual series of slights:

"It’s not the first time. We had the White House tours incident. I’m not going to say he’s the first president to blame someone outside of his own executive office, but does he take responsibility for anything? Incorrigible is really the word for him. He acts like a child and no one outside of conservative media holds him to account. These people are forfeiting their lives for you… This guy is just acting like a petulant child” [...]

"Instead of just doing what a responsible White House would do and say we blew it, they are completely incapable of acting like adults. It’s infuriating.”

It must be a great relief for President Obama to know his life depended on this guy, no?

For reasons we could not discern, Bongino somehow failed to work Benghazi into his rant. In any case, it's just more evidence that Barack Obama is a pretty lousy president, and we need a leader who will get along better with the Secret Service and make them actually want to protect him. Or her, although we bet that Bongino might, if pressed, be able to find something to dislike about Hillary Clinton, too.