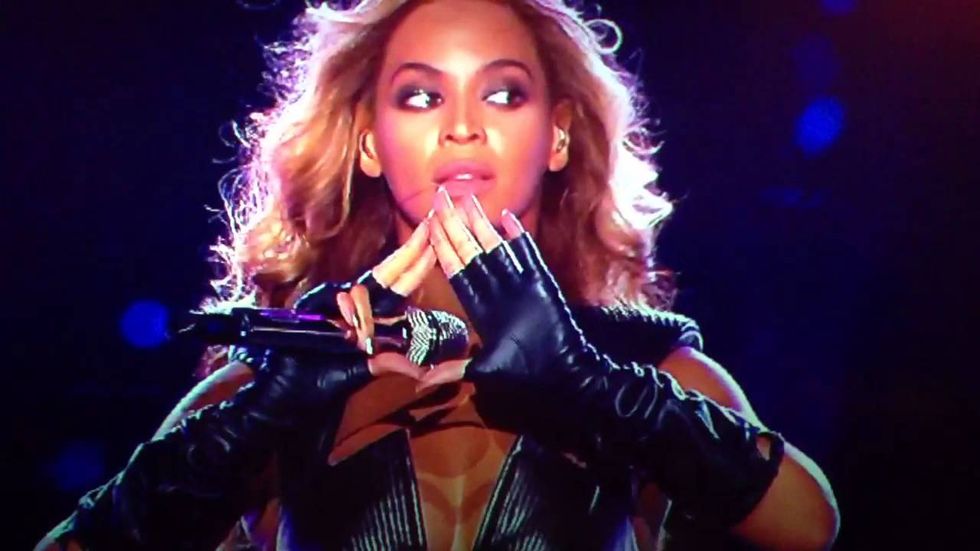 She is making an Illuminati signal to her BFF the devil.

UH OH LOOK OUT "PRESIDENT" TRUMP! Turns out that the worst prophecies of noted journalist Alex Jones are coming true and Barack Obama, now that he is not president anymore, is yes indeedy creating an army of Illuminati Beyoncés to take over America and then the world! And he is doing this by getting Jay-Z to make his wife Beyoncé pragnet WITH TWINS!

We would like to share our love and happiness. We have been blessed two times over. We are incredibly grateful that our family will be growing by two, and we thank you for your well wishes. - The Carters

WHAT? Do we even know they are HER TWIN BABIES? They might be Obama's babies, or Satan's babies!

Just kidding. We are very happy for Bey and Jay. This just proves you can have it all, ladies! You can have all kinds of babies; be an operator who brings home the paper; get all up in Mike Huckabee's grill just by existing; murder all cops by singing and dancing at the Super Bowl; take your man's ass to Red Lobster after he fuck you good; scare the bejesus out of some wussy Tennessee sheriff, again just by existing; murder all the rest of white America, because the CIA told you to; eat all the children's brains, but not your own children's brains, because they are part of the Army Of Beyoncés and are therefore exempt from getting their brains eated; and also be the sole reason the new "president" of the United States is such a perverted trash monster, because your nakey performance outfits are TOO NAUGHTY.

Anyway, here is a suggestion for who could be the babies' godmother, or at least their "Auntie Hillary":

Hooray for our new overlords in the Beyoncé Illuminati cult!

You may now use this as your open thread.