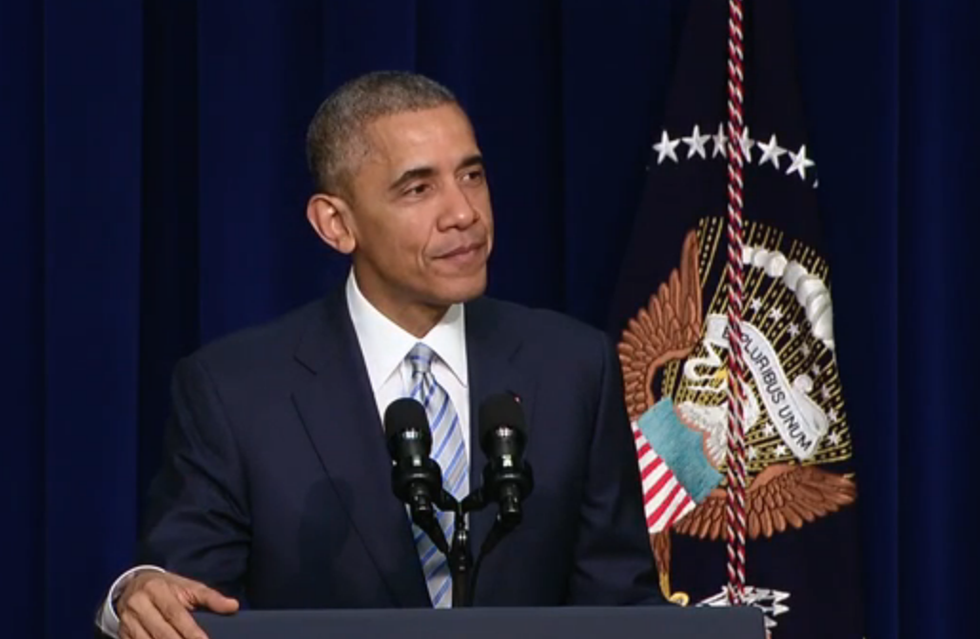 President Obama can NOT shut up about how great his precious Affordable Care Act is, just because of how great his Affordable Care Act is. The White House has been in full Hells Yeah! celebration mode, in honor of the fifth anniversary of the law that is going to destroy the nation any day now, and then we'll see who's laughing, WON'T WE, AMERICA? (Spoiler: It'll probably still be Obama.)

Now the braggart-in-chief has taken yet another opportunity to remind us of a few of the things Obamacare has already accomplished.

"It’s helped reduce hospital readmission rates dramatically," he said, which is "a major reason why we’ve seen 50,000 fewer preventable patient deaths in hospitals." That doesn't sound like much of an accomplishment, though. If he really loved America, he would have saved ALL the lives, right? Right! Repeal, replace, IMPEACH!

Then there's all this other unremarkable stuff he thinks is so great:

If you’ve got a pre-existing condition like diabetes or cancer, if you’ve had heartburn or a heart attack, this law means that you can no longer be charged more or denied coverage because of a preexisting condition, ever. It’s the end of the discrimination against the sick in America, and all of us are sick sometimes.

If you don’t have health insurance, you can go online to the marketplace and choose from an array of quality, affordable private plans. Every governor was given the option to expand Medicaid for his or her citizens, although only 28 have chosen to do so -- so far. But after five years of the ACA, more than 16 million uninsured Americans have gained health care coverage -- 16 million. In just over one year, the ranks of the uninsured have dropped by nearly one-third -- one-third.

Expanding access to 16 million Americans is also no big, because if he'd just left well enough alone, the free market would have taken care of those 16 million ... somehow. Everyone knows that!

He also threw around a bunch of "facts" about how Obamacare hasn't murdered all the jobs, even though Republicans have said that yes it has, so obviously he's just straight up lying:

But the bottom line is this for the American people: The Affordable Care Act, this law, is saving money for families and for businesses. This law is also saving lives -- lives that touch all of us. It’s working despite countless attempts to repeal, undermine, defund, and defame this law.

It’s not the “job-killer” that critics have warned about for five years. When this law was passed, our businesses began the longest streak of private-sector job growth on record: 60 straight months, five straight years, 12 million new jobs.

And then -- this is really the worst -- the president took a whole bunch of gratuitous digs at his far more mature and better-behaved Republican critics who've compared him to Hitler and accused him of hating America and demanded he deport himself from the Oval Office immediately for the high crime of health care reform:

I mean, we have been promised a lot of things these past five years that didn’t turn out to be the case: death panels, doom. A serious alternative from Republicans in Congress.

Over the line, Obummer! Republicans have said they are working on an alternative to Obamamcare, and they'll have it any decade now, probably sooner, if you'd stop taunting them so they have to get all distracted and give speeches about how terrible you are!

The budget they introduced last week would literally double the number of the uninsured in America. And in their defense, there are two reasons why coming up with their own alternative has proven to be difficult.

First, it’s because the Affordable Care Act pretty much was their plan before I adopted it based on conservative, market-based principles developed by the Heritage Foundation and supported by Republicans in Congress, and deployed by a guy named Mitt Romney in Massachusetts to great effect. If they want to take credit for this law, they can. I’m happy to share it.

Oooh. Bringing up Mitt Romney. Now that is a low blow. And because he just couldn't help himself, the president issued a challenge to his friends across the aisle who hate his guts:

On the other hand, for folks who are basing their entire political agenda on repealing the law, you’ve got to explain how kicking millions of families off their insurance is somehow going to make us more free. Or why forcing millions of families to pay thousands of dollars more will somehow make us more secure. Or why we should go back to the days when women paid more for coverage than men. Or a preexisting condition locked so many of us out of insurance.

Unfair, Mr. President, UNFAIR! First, Republicans need to murder Obamamcare, because of all the lives and money it is saving and the good it is doing. Then they'll get around to figuring out how to replace it with something better. Priorities, sir.