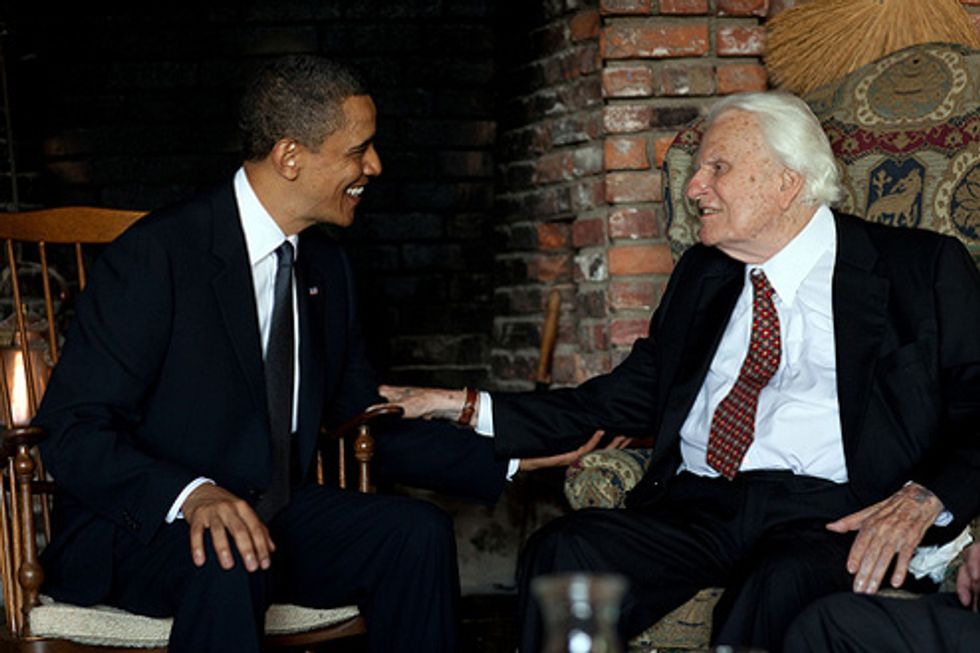 Why did Barack Obama stop by Billy Graham's golden tent revival castle? Just tradition, we suppose. Graham somehow gets to hang out with presidents, and he has done so since the time of Harry S. Truman. Billy even got to play golf with the papist John F. Kennedy, who did not request the Southern Baptist evangelist's "spiritual counsel."

First: Franklin Graham, Billy's son and ninth-rate stand-in these days, is a vile shitbag and a racist so treacherous to the Ideals of America that the Pentagon denied him an opportunity to spew his venom. That he was allowed in the same room as our half-muslin president, Barack Obama, is an affront to liberty and an actual shredding of the Constitution.

Old Man Billy himself is a more complicated character. A tent-revival charlatan selling lies to the doomed and the poor for some seven decades, the Reverend Graham built a fortune and a globe-trotting career upon the desperate sadness of America's wretched. And yet .... the man occasionally practiced what he preached, because he preached the very few recorded words of this Jesus of Nazareth (or Jesus the Nazarene, whatever, argue over your Koine Greek somewhere else), and used that as a foundation to oppose segregation (after originally being a hardcore segregationist, of course). Graham even bailed out Martin Luther King Jr. and preached alongside King in New York City back in 1957.

Graham can also be heard as Richard Nixon's jabbering ass-kissing yes-man during Watergate tapes of Drunken Dick railing against the Jews who run the media. But Graham didn't just agree. He had many important points to add to this important discussion, about the Jews being porno-devils:

The evangelist also described Jewish friends in the media who "swarm around me and are friendly to me. Because they know that I am friendly to Israel and so forth." But he added, "They don't know how I really feel about what they're doing to this country, and I have no power and no way to handle them."

Nixon then advised him, "You must not let them know."

Concurring with a Nixon claim that the president is faced by a "powerful bloc" of Jews in Hollywood and the media, Graham also said: "And they're the ones putting out the pornographic stuff."

As one of the pioneer evangelists to support literally anything the government of Modern Israel does, forever, no matter how horrendous, because Jesus had been a Jew before he totally shit all over Judaism, just so he could get his own Bible, Graham seemed sincerely hurt that he'd been caught on tape saying that Jews were satanic monsters. But, whatever, it's not like Jews were the ones dumping sweat-stained clumps of dollar bills in the collection plates during Graham's endless "crusades."