Obama Tells Rolling Stone Why Republicans Are So Lame 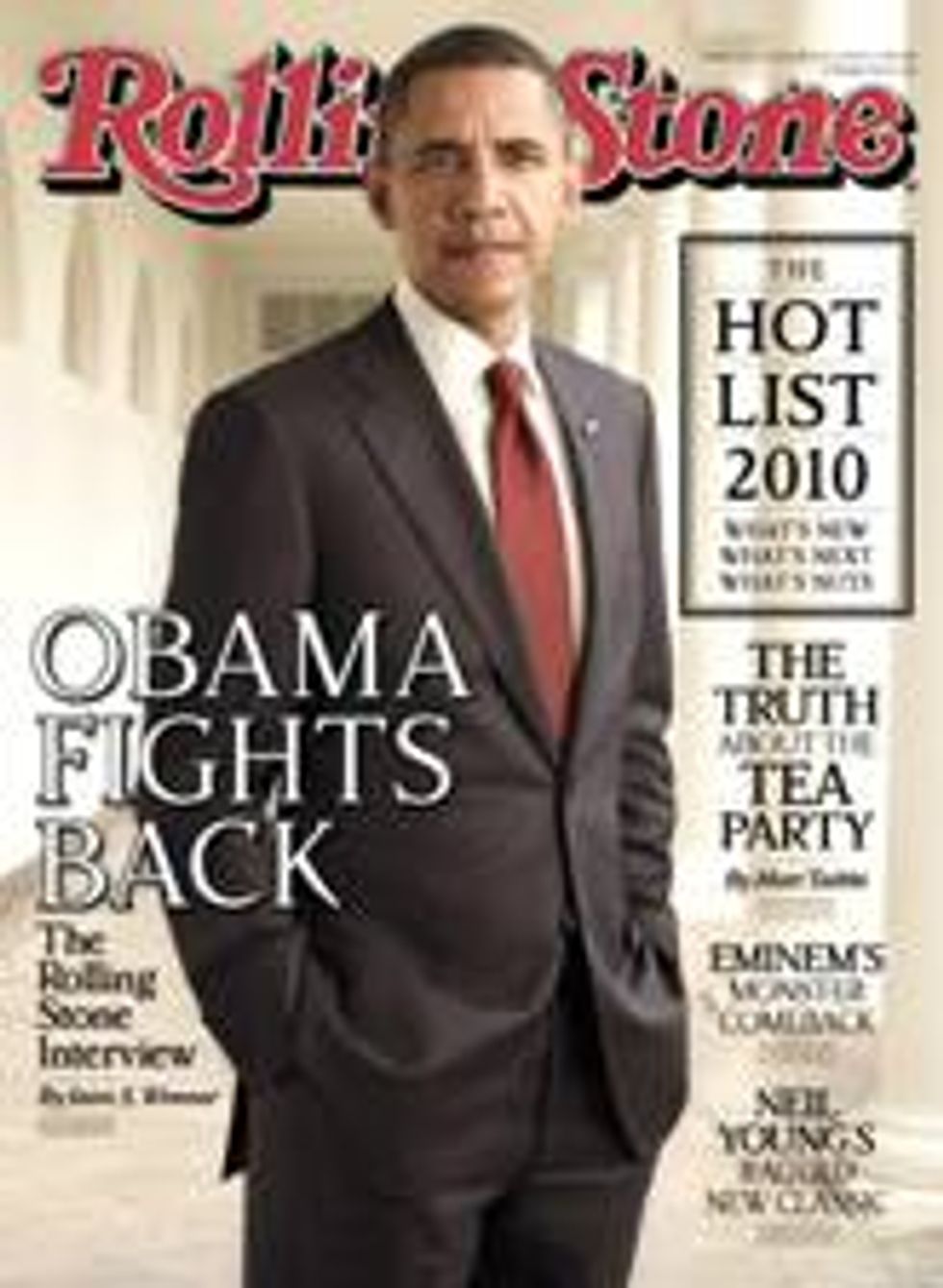 The military journalRolling Stone has taken a break from its usual "all war all the time" Afghanistan/Iraq reporting to visit with the military's president, Barack Obama, in Washington. Last time Obama had to deal with the army magazine was back in June, when Rolling Stone 'tween cover boy Stanley McChrystal got in trouble for saying how much he hates America's president and vice president. And then Obama had to fire him. So what does this anti-Rolling Stone president have to say to the magazine? He basically explains how Republicans made a tactical gamble that the economic devastation was going to be around for a long time -- at least until 2010, although many experts say "forever" -- so blocking whatever Obama Administration programs to pump money into the moribund economy and get Americans back to work would, maybe, make it look like the Republicans weren't to blame for letting the Great Recession happen during their control of the White House for the previous eight years and Congress until 2006.

Here are a few Obama quotes from this very long interview, which we will post as a way to say to Jann Wenner, "Look we know it is super cool for you to go to the White House and interview Obama all by yourself, but this could've been edited down to maybe 2,000 words, and it still would've been a good story that gets lots of blog links and Politico mentions!"

But the delays, the cloture votes, the unprecedented obstruction that has taken place in the Senate took its toll. Even if you eventually got something done, it would take so long and it would be so contentious, that it sent a message to the public that "Gosh, Obama said he was going to come in and change Washington, and it's exactly the same, it's more contentious than ever." Everything just seems to drag on — even what should be routine activities, like appointments, aren't happening. So it created an atmosphere in which a public that is already very skeptical of government, but was maybe feeling hopeful right after my election, felt deflated and sort of felt, "We're just seeing more of the same."

Yes that is what we summarized in our lede. Speak, Nobama:

There are some strong and sincere libertarians who are in the Tea Party who generally don't believe in government intervention in the market or socially. There are some social conservatives in the Tea Party who are rejecting me the same way they rejected Bill Clinton, the same way they would reject any Democratic president as being too liberal or too progressive. There are strains in the Tea Party that are troubled by what they saw as a series of instances in which the middle-class and working-class people have been abused or hurt by special interests and Washington, but their anger is misdirected.

And then there are probably some aspects of the Tea Party that are a little darker, that have to do with anti-immigrant sentiment or are troubled by what I represent as the president. So I think it's hard to characterize the Tea Party as a whole, and I think it's still defining itself.

Well that's a long-ass way to say "they're ignorant white racists," but how else can The Professor answer a question? Speak, Nobama:

My iPod now has about 2,000 songs, and it is a source of great pleasure to me. I am probably still more heavily weighted toward the music of my childhood than I am the new stuff. There's still a lot of Stevie Wonder, a lot of Bob Dylan, a lot of Rolling Stones, a lot of R&B, a lot of Miles Davis and John Coltrane. Those are the old standards.

So except for the jazz, it's the same stuff Rolling Stone has been writing about for half a century! Awesome. (We like Bob Dylan, too, but we don't put him on the fucking cover of Wonkette once a year like clockwork. That honor is reserved for Mitt Romney.)

Finally, we should let RS editor Jann Wenner have some of his words excerpted, because they're so great. Who says RS needs "a new Hunter Thompson," eh? Maybe Rolling Stone just needs MORE Jann Wenner!

The conversation stretched on for nearly an hour and a quarter. The president began by complimenting my multi-colored striped socks. "If I wasn't president," he laughed, "I could wear socks like that."

Great, so now the Tea Party will know that Obama likes gay socks. Thanks for electing Sarah Palin-Christine O'Donnell in 2012, Rolling Stone! [The Barack Obama Interview]