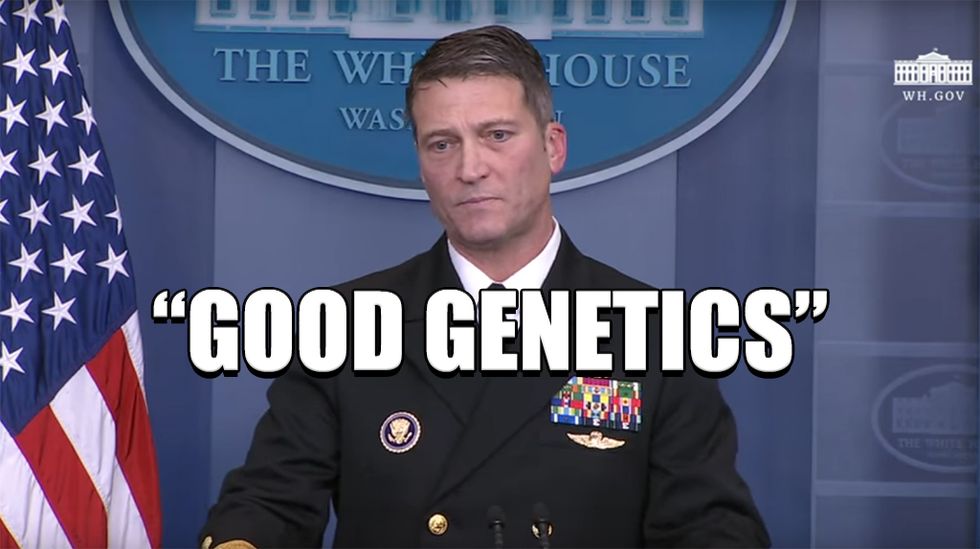 The House Intel Committee is making Steve Bannon drag his ass back to the Hill again this morning after Trump's White House cited executive privilege to keep him from talking. Since Bannon spent much of the 10-hour meeting trying to suck his own cock, Bannon GOT SERVED by Robert Mueller too, and word is leaking out that Bannon would really like to avoid speaking in front of a Grand Jury. FBI agents actually showed up at Steve Bannon's house last week, but Bannon told them to talk to his attorney, William Burck, the same guy defending White House Counsel Don McGahn and Reince Priebus. HOW CONVENIENT!

A federal judge has shot down Robert Mueller's request to put Paul Manafort and Rick Gates on trial in May, so now the trial is likely to begin in September or October, right before the 2018 Midterms. LOL.

House Republicans introduced a laughably obscene stop-gap funding bill designed to cripple health insurance provisions but they don't even have the House Freedom Crazies on board, and that's making a government shutdown more likely.

Some Republicans are signaling that they'd rather have a clean DACA bill in exchange for a clean defense spending bill that raises sequestration caps. Look at these beggars being all choosy!

House Minority Whip Steny Hoyer says that Democrats won't support any funding bill unless it includes DACA protections, and they expect Republicans to kick the can down the road...again.

IF a deal isn't reached, the blame is likely to fall on Republicans (as usual), but nobody is enthused about becoming the next Ted Cruz or Newt Gingrich.

Chairman of the Joint Chiefs Gen. Joe Dunford has said that the new National Military Strategy is none of your fucking business, so don't bother asking how Uncle Sam is going to kill bad hombres at home and abroad.

The Senate barely renewed Section 702 of FISA last night after an unlikely alliance of Democratic leaders and libertarians began pushing for greater privacy protections for Americans.

The Trump administration plans to protect doctors who refuse to perform abortions or treat transgender patients if they decide to cite religious/moral objections. Hope that Jehovah's Witness wasn't scheduled to do your blood transfusion!

Trump's Justice Department wants a SCOTUS ruling on Dreamers after a San Francisco judge said that all the little Messican kids can continue to apply for DACA protection.

Frederica Wilson and Pramila Jayapal have announced they'll skip the SOTU citing "racism and hatred coming out of the White House," and will instead hold their own "State of Our Union" party where it'll be way easier to sneak in a flask.

A brain drain up and down the ballot is spreading throughout the GOP as Republicans pass on 2018 challenges to Democrats running for reelection, allowing Democrats to fortify their war chest and image for 2020.

Nine out of 12 members of the National Park Service Advisory Board quit out of frustration with grifty bastard Ryan Zinke's continued refusal to meet with the panel even once.

The Navy is filing charges that include negligent homicide against commanders and officers involved in the collisions of the USS McCain and USS Fitzgerald.

Like many Americans, Trump is borderline obese and balding, and the fat-ass denials have spawned the "#girther" movement. SHOW US THE SCALE!

Last night Hannity started crying about the lying liberal media fat-shaming Trump, and bitched about how nobody complained about Obama's health. He then brought out Eric Trump to defend all the cheeseburgers, Red Bull and ice cream. Donald Trump is a (obese) American, damn it, and he can have a heart attack if he wants to!

Congrats to Patty Schachtner, who just won a special Wisconsin state Senate election against a little twerp who sent around nasty campaign mailers.

Ann Curry will be on teeve this morning to talk about Matt Lauer being a creepy, job stealing pervert. UPDATE: She wasn't surprised.

Border patrol agents regularly destroy water and food parcels at secret aid stations stocked by humanitarian groups trying to prevent people from dying of thirst as they trek across the desert.

Syrian crossroads seem like cold war battlegrounds for US and Russian forces trying to gain footholds in the Middle East, and the US plan to support Kurdish rebels is pissing off regional autocrats and dictators.

Rappler is a news outlet in the Philippines that was was shut down Monday because it's been critical of President Rodrigo Duterte killing innocent people.

Apple is again denying charges that its Chinese factory workers are suffering in deplorable conditions so that snotty 10-year-olds and presidents can shitpost on social media.

Just in case you needed to text your drunk uncle, somebody is creating a bot that imitates Trump tweets. Hurray...Science....

And here's your late night wrap-up! Stephen Colbert noted that it's convenient Trump is only ALMOST obese; Seth Meyers did a quick Check In with Puerto Rico; The Daily Show is calling bullshit on fat-gate; Jordan Klepper is resisting the "estrogenda."

We're ad-free, so give us some money OR WE'LL DIE!