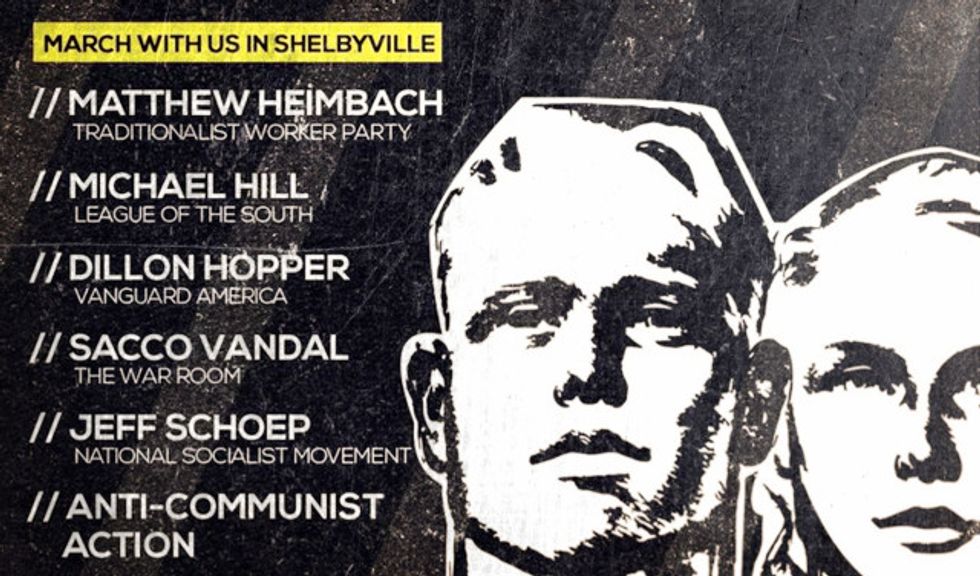 But whatever it is you are doing, if you are reading this right now, it is highly unlikely that you are spending your day going to one of the two "White Lives Matter" rallies in Shelbyville and Murfreesboro, Tennessee today, unless it is to counter protest. So you have that going for you. Literally nothing you could do with your day would be as pathetic or gross as doing that.

This latest Nazi rally is being put on by the white supremacist group Nationalist Front, and will feature speakers from various other Nazi groups with similarly stupid sounding names.

This weekend’s rallies will include some familiar faces from Charlottesville: the Nationalist Socialist Movement, a neo-Nazi group; the Traditionalist Worker Party, which wants a separate white ethno-state; Anti-Communist Action, a right-wing group that believes America is being threatened by “communists” — a label they apply liberally; and Vanguard America, a white supremacist group that believes America is inherently a white nation and that identity must be preserved.

Absent from the rally, of course, is Crying Nazi Christopher Cantwell, who is too busy being in JAIL.

Let's be real here. These people think they're gonna get to have AMERICA as their "white nation?" Please. That Craig Cobb asshole couldn't even get it together to make Leith, North Dakota (pop. 16 people total) a white supremacist town, and they think that they're going to find enough people who want anything to do with them to fill up the giant land mass that is AMERICA? I think not. As many shitty people as we have in this country, as many shitty people who voted for Donald Trump, as many shitty people as their are out there casually upholding white supremacy in shitty ways -- there are not exactly a fuckton of people out there who are all that eager to join their little white ethno-state.

These are people who vastly overestimate their appeal, and as counter-protester Daryle Jenkins points out, they're gonna end up getting smacked down by life when they go out and try to get jobs and live in the real world.

“The young ppl here at the pro-white Supremacicy rally have no idea how much they are ruining their lives” #Shelbyville@DLamontJenkinspic.twitter.com/Qn56rMFXXn

As well they should.

Honestly, I am not any more thrilled to share a country with them than they are to share it with, well, most of America. If we could somehow quarantine them all in some "ethnostate" where they could not vote in our American elections or otherwise bother normal Americans, I would not be 100% opposed to that. Frankly, I'd like to see them go away. And hell! Look at those damn rallies. They're like 95% men. They'd Darwin themselves out of existence before they'd ever have a chance to, what is it? Secure the existence of their "people" and a future for white children? GOOD LUCK WITH THAT SHIT.

And then, yes, we will replace them.