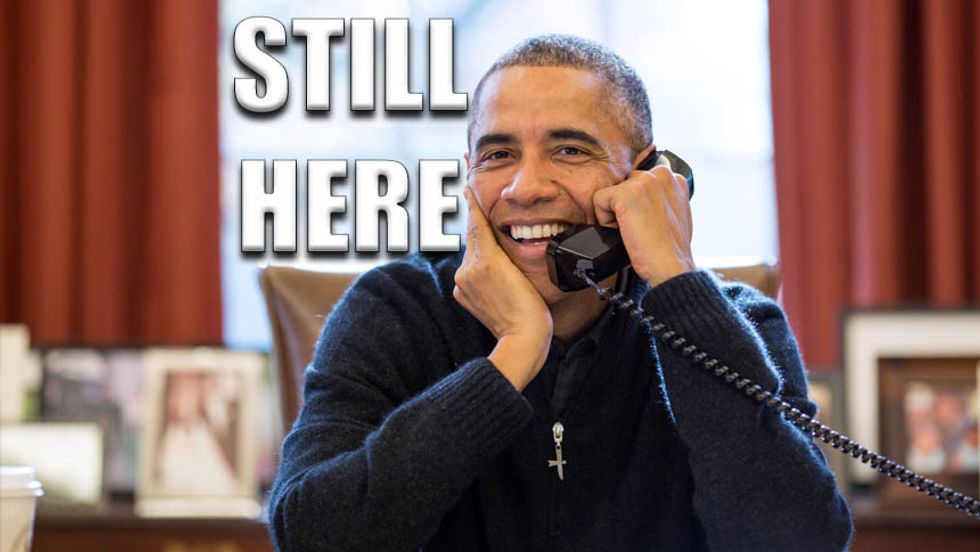 What Donald Trump sees when he closes his eyes.

How long has it been since Donald Trump put America on pause by pulling "information" out of his b-hole and tweeting about Barack Obama doing "wire tapps" to him? THIRTY DAYS. In that time, we've watched Trump and his White House try their absolute damnedest to change the subject and move the goalposts, in their desperate attempts to make the things Trump tweeted true. It hasn't worked, but it's made dumbass congressman Devin Nunes a household name, as he runs around doing Trump's bidding.

But now there is a BREAKING NEWS! and Trump has been vindicated after all, according to Eli Lake at Bloomberg:

White House lawyers last month learned that the former national security adviser Susan Rice requested the identities of U.S. persons in raw intelligence reports on dozens of occasions that connect to the Donald Trump transition and campaign, according to U.S. officials familiar with the matter.

Susan Rice is ... a Republican bête noir, the villainess of Benghazi who LIED ON TV repeatedly and tried to get everyone to believe that the attacks were due to an INTERNET VIDEO when we knew all along they were really the work of RADICAL ISLAMIC TERRORISTS, a phrase that OBAMA WAS UNWILLING TO UTTER.

Look at Mother Jones doing ALL CAPS! It's like they're finally learning how to write good over there! (We are obviously joking, as Mother Jones is our fucking hero.)

Susan Rice, of course, was Obama's national security adviser, so if anybody in the Obama administration asked for "unmasking" of U.S. persons picked up in routine surveillance of FOREIGN BAD ACTORS WE SPY ON, she would be the one to do it!

Cool story, bro. Susan Rice did a legal thing and it's fine, therefore this story should get fucked, right?

In the paragraphs that come before the ninth paragraph revelation that the story is not a story, we learn that Ezra Cohen-Watnick, senior director for intelligence at the National Security Council and one of the goons who gave Devin Nunes his "intelligence" about Trump surveillance, was the one who found out that Evil Susan Rice did the "unmasking," and that the conversations in question were "primarily between foreign officials discussing the Trump transition, but also in some cases direct contact between members of the Trump team and monitored foreign officials." Guess that's the super exciting stuff Devin Nunes got to view at the White House, before he ran to the White House to tell the White House what he learned from the White House about illegal "wire tapps" that were entirely legal and definitely "not about" Russia.

(Oh look at that, maybe Trump is right, and "quotation marks" mean the opposite of the thing being quoted!)

In his Bloomberg piece, Eli Lake notes that this information doesn't in any way make Trump's original Twitter shitstorm about Obama putting "wire tapps" inside his fanny true. It's just a thing that happened, and if Susan Rice requested U.S. persons' names to be unmasked, she, the national security adviser to a competent president, probably had a good fucking reason to do so.

And it was legal.

So ... why are we talking about this again? Screw it, we're not, because THIS POST IS OVER.