Oh Fiddlesticks, Did Jeff Sessions Do Even More Perjury About Russian Contacts Than We Thought? 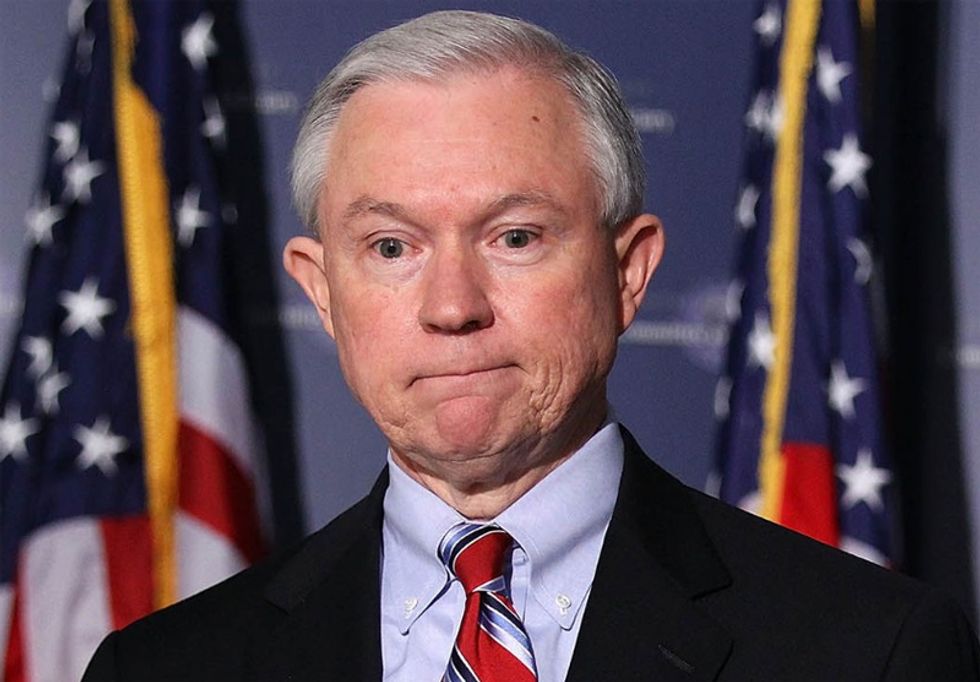 One million years ago, during Attorney General Jeff Sessions's confirmation hearings, Senator Al Franken (D-Hero) asked the slow-talkin' Alabammy redneck what he would do if, FOR HYPOTHETICAL, he found out Trumpers had secretly met with Russian officials. In response, Sessions answered a question Franken DID NOT ASK, saying, "I do declare, I, Jefferson Beauregard Sessions III, have never done a nookie down by the old creek with the Russian ambassador!" OK fine, this was the real quote:

“I have been called a surrogate at a time or two in that campaign and I did not have communications with the Russians.”

Senator Patrick Leahy submitted a written question to Sessions that was more direct: "Have you been in contact with anyone connected to any part of the Russian government about the 2016 election, either before or after election day?" Sessions's answer, again, was "I do declare that NOPE!" Of course, not long after that, the Washington Post broke the story that Sessions DID TOO meet with Russian ambassador Sergey Kislyak, once at the RNC and another time last September in his own office, but we guess Jeff Sessions just plum forgot about that. Or he perjured himself.

Sessions ultimately recused himself from any matters pertaining to the Trump-Russia investigation, even though he explained that at his September meeting with old Sergey, all they talked about was Ukraine and this one time Jeff Sessions took a romantic trip to Russia with Jesus. He also claimed, incorrectly, that Franken had accused him of being "part of a 'continuing exchange of information during the campaign between Trump surrogates and intermediaries of the Russian government.'" NOPE. Those were Sessions's own words, and also maybe a Freudian slip.

Wednesday night, Senator Al Franken appeared on the Lawrence O'Donnell MSNBC program (which IS getting renewed, which means the pressure on NBC News shithead Andy Lack worked!) and he broke some news! It turns out that he and his colleague Senator Pat Leahy sent letters to former FBI director James Comey AND acting FBI director Andrew McCabe, asking them to look into ANOTHER Sessions meeting with the Russian ambassador that must have completely slipped the kindly attorney general's mind:

FRANKEN: Senator Leahy and I sent a private letter to ... FBI director Comey asking him and the FBI to investigate whether, in fact, Sessions had met other times with Russians, including this meeting that we're talking about, in the Mayflower.

O'DONNELL: Did you know about that meeting in the Mayflower when you sent that letter to the FBI director?

FRANKEN: Yes ... it had been characterized one way, but we had some reason to believe that that wasn't the case. It had been described in a way that he could plausibly say, "I don't remember that." But what's coming out today, I believe, is that that may not be the case. And if this is true, that would be extremely disturbing.

When Franken said "what's coming out today," he was talking about news from CNN that Congress is investigating a THIRD Sessions meeting with the Russian ambassador at the Mayflower Hotel on April 27, 2016, at the gathering where Trump delivered his first pro-Russia foreign policy speech. There was a little VIP party, and literally EVERYONE was there. Sessions, Paul Manafort, the Russian ambassador, three other ambassadors, Jared Kushner ... literally ALL the coolest kids in Trump World. Now, maybe at the little VIP reception they all just said hi and talked about their grandkids like a common Bill Clinton and Loretta Lynch at the Phoenix airport. Was it just a receiving line with pleasantries exchanged and whatnot, or was there an even more private meeting and all these fuckers are lying?

NBC follows up on CNN's reporting with some new information:

Five current and former U.S. officials said they are aware of classified intelligence suggesting there was some sort of private encounter between Trump and his aides and the Russian envoy, despite a heated denial from Sessions, who has already come under fire for failing to disclose two separate contacts with Kislyak. Kushner also denied through a spokesman that he met privately with Kislyak that day.

Oh, so maybe some shit went down there!

Well, we're certain the truth will continue to drip out, and we're glad that Al Franken, who is a goddamn hero for asking the original question that tricked Sessions into maybe perjuring himself in the first place, is on the case.