Oh Go Fuck Yourself With A Tiki Torch, Tucker Carlson 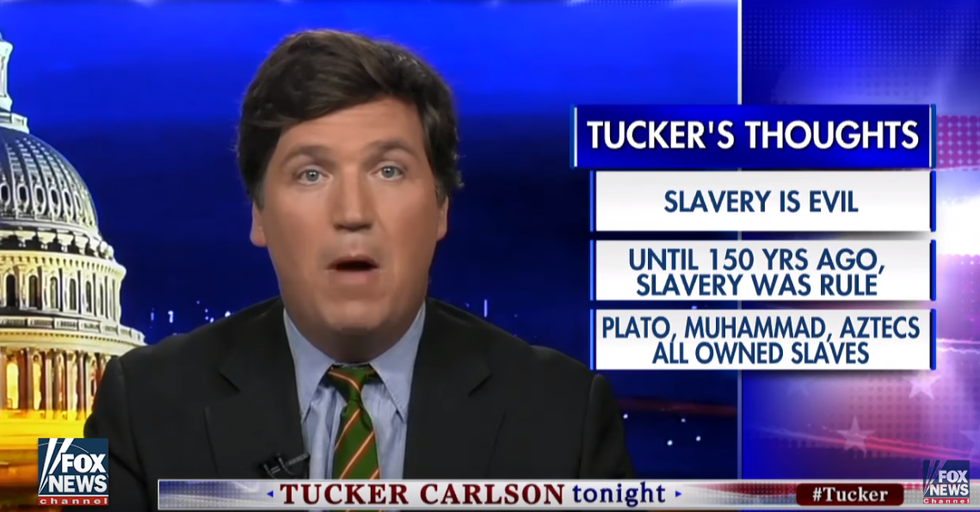 After Donald Trump appeared in the tacky-ass gold-plated lobby of Trump Tower to make his definitive statement on Charlottesville, which was that at least the Nazis, some of whom were just lovely people, had a permit to protest, we wondered which Fox News douche-chunk would win the white supremacist crown in his defense of Trump. Tucker Carlson or Sean Hannity? Sean or Tucker? Both of them, Katie??? It looks like, BY A HAIR, Tucker Carlson wins this round, because of this quote from Tuesday night's show (start around 2:35 in):

Maybe he's worried they get more pussy than he does. Maybe he wishes they would focus their violence on people who scare him a lot more, like gay dudes and transgender folks using the bathroom. MAYBE! We just don't know.

Anyway, Carlson agrees that both sides do it, especially the Left side, which is racist against racists, racistly:

I see people with signs attacking white supremacy or it's always about race with them as well. ... They seem every bit as race-obsessed and angry as the people they are fighting. But nobody acknowledges that for some reason.

"For some reason." That's right, Tucker, who among us (if not Donald Trump!) will defend bigots against the reverse-bigots who unfairly hate them for being bigots? He didn't mention Black Lives Matter right then, but we assume he thought it, because Tucker Carlson is the kind of racist puddle of human excrement who thinks that when black people stand up and say they'd like to have the right to life and liberty just like everybody else, that they are somehow slurring white people.

By the way, Tucker Carlson really hates it when you call him a Nazi apologist, so even though he's engaging in WhatAboutIsm and trying to make liberals out to be the REAL racists, which would suggest that if he had been in Charlottesville, he'd have felt fairly at home holding a tiki torch, don't say that. It's just not nice and it hurts his feelings.

Also don't mention how the Nazi Fuckstain who rammed his car into the crowd and murdered Heather Heyer just might have gotten that idea from a video published by The Daily Caller, which was founded by ... Tucker Carlson! (Fox News, Carlson's employer, also had a post like that. Surprise, they have both suddenly been deleted.)

Here's another segment, where Carlson explains that Trump was totally right to say removing Confederate monuments is a slippery slope -- here in this week after literal Nazis killed people over the removal of a confederate monument -- and that before we know it, those evil leftists (the real racists) are going to demand we take down statues of George Washington and Thomas Jefferson. He then lists a group of really awesome people who ALSO owned slaves, like Plato, Muhammad and the Aztecs, because that's relevant:

.@TuckerCarlson on Fate of Slaveholders Washington, Jefferson: 'If That's the Standard, Nobody is Safe' https://t.co/sCzpl4xsmz | #Tuckerpic.twitter.com/ESx1i6ke2V