Oh Great, Now Even The Southerns Are Gender Fluid 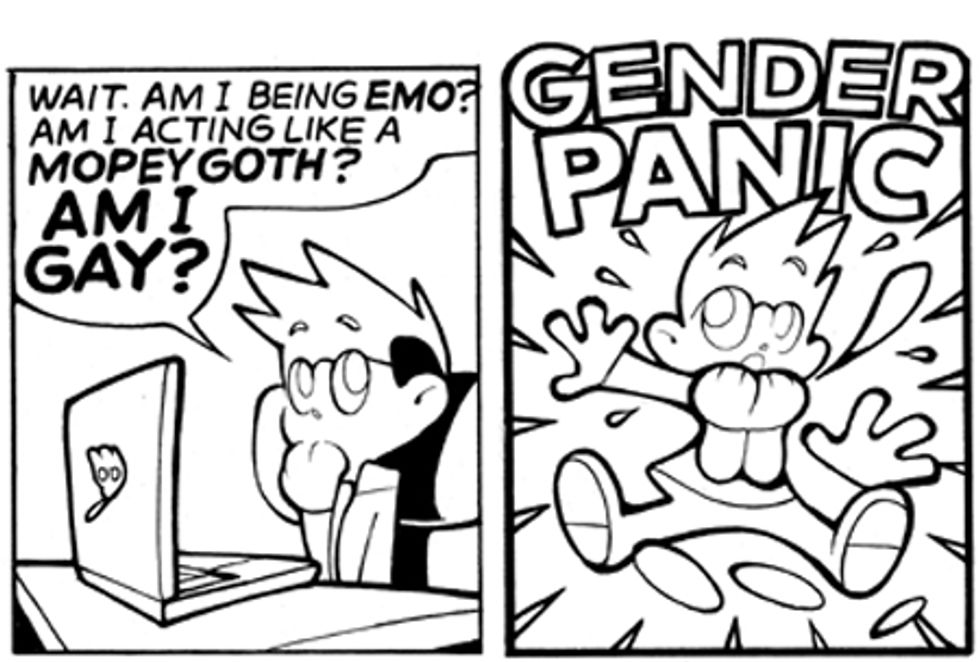 Ah, Sinfest, we love you

It's the first week of school at many colleges, which means it's time for another round of panic about socialist liberal indoctrination and threats to America and all that stuff. Take, for example, this "What are those crazy eggheads saying now?" piece from Knoxville's local TV station WATE, expressing wonderment at the University of Tennessee's decision to encourage teachers and students to consider using gender-neutral using gender-neutral pronouns:

The University of Tennessee is asking students to use “ze, hir, hirs, and xe, xem, xyr.”

No, those words are not another language. They’re actually the gender-neutral singular versions of pronouns.

Oh no! Neologisms! Those never work, except for Ms., and that had a whole magazine. The director of UT Knoxville's Pride Center, Donna Braquet, explained that gender binaries are a tad outmoded:

Transgender people and people who do not identify within the gender binary may use a different name than their legal name and pronouns of their gender identity, rather than the pronouns of the sex they were assigned at birth.

Braquet also suggested instructors might consider asking students to provide their names and preferred pronouns, during the first week of school, to ensure that everyone gets identified to their liking. The article even includes two diagrams!

Not surprisingly, there is Much Agita over this in the comments, with the usual condemnation of liberal gay indoctrination, outrage that anyone would ever care about something so pointless, grumping that it's "downright stupid," fears that the English Language is Under Attack, a couple calls for Ms. Braquet to be fired immediately, and a prediction that this sort of thing is exactly why Donald Trump will be our next president. But at least we didn't notice too much panic about how this will only encourage people peeing in the "wrong" restrooms.

Yr Wonkette is actually agnostic on this; these proposed gender-neutral pronouns have been around forever and don't seem to be gaining any traction, because nobody likes having to think too much about how they talk. When he was teaching first-year composition, Yr Doktor Zoom simply told students that "he" as a default pronoun is problematic, and that we're quite happy to adopt the singular "their" as a means of inclusiveness, since it has a pedigree in common (and even literary!) usage, no matter how many times angry grade-school pedants might circle it in red and insist that "everyone should pursue their dreams" is Simply! Not! Logical! Compared to Ms., which is a simple two-letter honorific that even the New York Times eventually embraced, the proposed alternative pronouns strike us as pretty unlikely to catch on. They may have an internal logic and good ideological intentions, but they're new and funny-looking, and in a country that never figured out the freaking metric system, they're likely to just be too hard. Our money is on the singular they/them/their to eventually become standard, with perhaps a pissy minority-report footnote in stodgier usage guides.