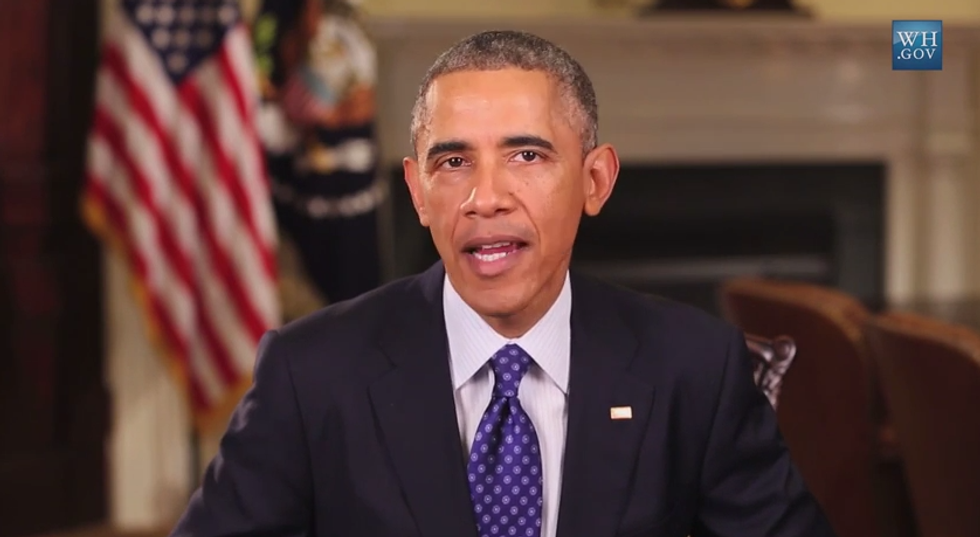 As if Obummer hasn't done enough to destroy America, now he wants to cure AIDS. Ugh, what next, cheap gas?

Instead of showing true leadership by ignoring AIDS completely, like a real president would, or having his drug czar explain how marijuana leads to being gay leads to dying of AIDS, Barack Obama took almost three whole minutes out of his day, when he should be doing other things like impeaching himself and apologizing to Ferguson Police Officer Darren Wilson, to make a video recognizing that it is World AIDS Day. Gawd, what a jerk.

And because the president just looooooves to spend your hard-earned tax dollars on dumb things like Obamaphones and fighting all those wars you want, he's wasted a whole bunch of money expanding a program to fight AIDS that was created by a certain president who became before him, but that's different because he was a compassionate conservative hero so shut up:

He pointed to broader access to treatment, testing and prevention for people across the world, touting the President's Emergency Plan for AIDS Relief (PEPFAR), a multibillion-dollar Bush administration program.

The program, which had its budget tripled by Obama, now provides treatment to 7.7 million people globally and spends nearly $50 billion annually.

But that's not even the worst of it.

We’re closer than we’ve ever been to achieving the extraordinary: an AIDS-free generation. But we’ve got to keep fighting, all of us.

He wants to eliminate it completely! He doesn't even care about all the people who research AIDS who will be out of jobs if evil job-killing Obama gets his way. He even issued a Presidential Proclamation, which must be unprecedented and unconstitutional and unpresidential because Obama, so we'll definitely expect Speaker of the House John Boehner to add that to his lawsuit of grievances against the president. And sheesh, he can't even stop talking about himself for one minute when he's supposedly talking about health care for people with AIDS:

There is more work to do, and my Administration remains steadfast in our commitment to defeating this disease. Guided by our National HIV/AIDS Strategy, we are working to build a society where every person has access to life-extending care, regardless of who they are or whom they love. The Affordable Care Act prohibits insurance companies from denying coverage due to a pre-existing condition, such as HIV/AIDS, and requires that most health plans cover HIV screenings without copays for everyone ages 15 to 65 and others at increased risk. We have expanded opportunities for groundbreaking research, and we continue to invest in innovation to develop a vaccine and find a cure. And this summer, my Administration held a series of listening sessions across the country to better understand the successes and challenges of those fighting HIV at the local and State level.

Yeah, well, maybe Obamacare maybe helps some people maybe, but we're counting on the Republican-controlled Congress to fix that right quick come January, even though yet another poll shows a majority of Americans would prefer Congress not repeal Obamacare, thanks, but what they hell do they know? Idiots.