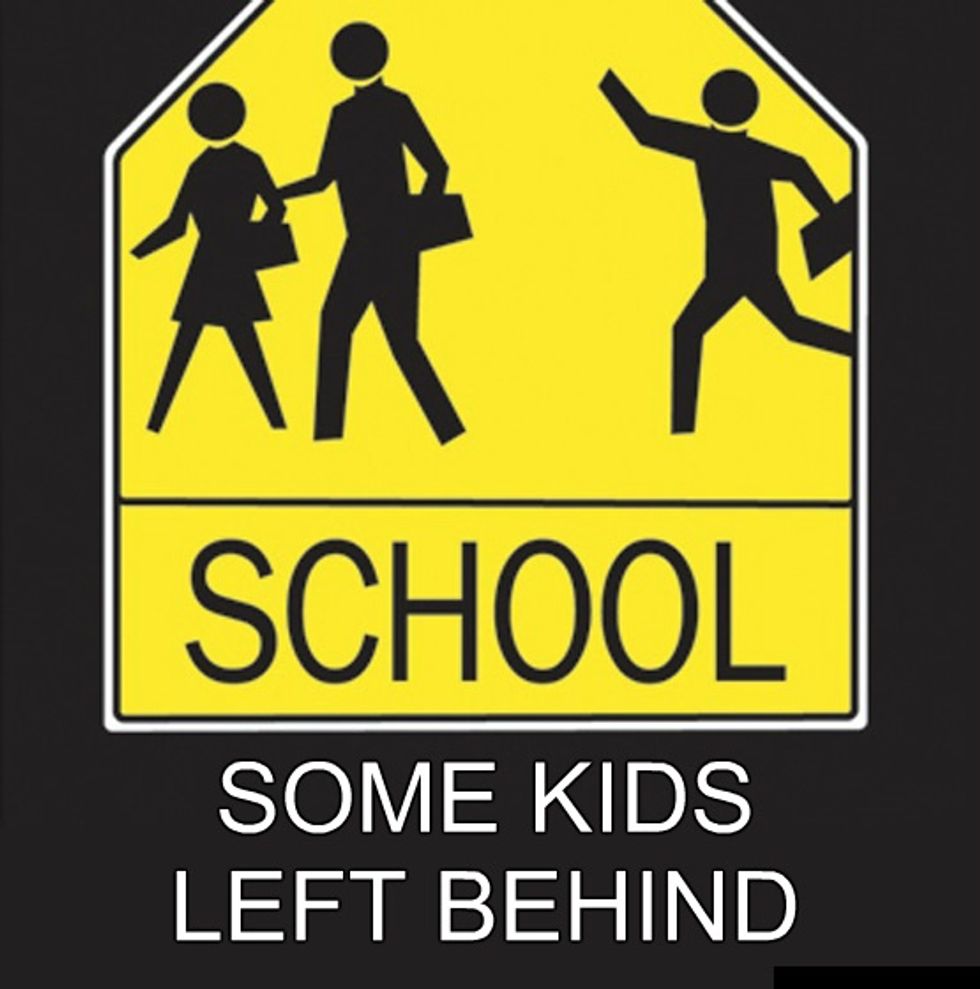 But it's a great way to game the system!

Hope you're ready for some edu-outrage this morning, because the good folks at investigative journalism nonprofit ProPublica have published a damning look at how some school districts have found an ingenious way to raise test scores and graduation rates at their top schools: All they have to do is nudge the academically weakest students out of the good schools into private charter schools where they can be warehoused until they drop out. The "good" schools win awards for excellence, the charters turn a healthy profit for the companies that plop the low achievers down in front of computers all day, and everyone's happy, except maybe the low-achieving students who, instead of getting extra help and a second chance for academic success, get shunted off to a dead-end school where they're allowed to quietly fail. It's OK! Those losers would have just dragged everyone else down anyway!

To illustrate how this nationwide problem plays out, the ProPublica report looks closely at two high schools in the Orlando, Florida, school system: the high-achieving Olympia High School, which "offers more than two dozen Advanced Placement courses, even more afterschool clubs, and an array of sports from bowling to water polo," and Sunshine High School, a for-profit charter located in a strip mall, just a couple doors down from a liquor store. Olympia High wins awards, attracts scholarships, and got listed in US News and World Report's top 1,000 high schools. Sunshine High has its students sit at computers for four hours a day, and they're lucky to ever see any live teaching. Big surprise: More than 85 percent of Sunshine High's students are black or Hispanic. You know, disposable kids. ProPublica explains the sick symbiotic relationship between the prize-winning public school and the charter dumping ground:

Sunshine takes in cast-offs from Olympia and other Orlando high schools in a mutually beneficial arrangement. Olympia keeps its graduation rate above 90 percent — and its rating an “A” under Florida’s all-important grading system for schools — partly by shipping its worst achievers to Sunshine. Sunshine collects enough school district money to cover costs and pay its management firm, Accelerated Learning Solutions (ALS), a more than $1.5 million-a-year “management fee,” 2015 financial records show – more than what the school spends on instruction.

But students lose out, a ProPublica investigation found. Once enrolled at Sunshine, hundreds of them exit quickly with no degree and limited prospects. The departures expose a practice in which officials in the nation’s tenth largest school district have for years quietly funneled thousands of disadvantaged students -- some say against their wishes -- into alternative charter schools that allow them to disappear without counting as dropouts.

It's a great system for pumping up the stats for the "best" schools, as long as you don't mind leaving some children behind. The idea behind "alternative schools" -- in districts where they aren't merely warehousing the lower achievers -- is that they should be places where kids who don't do well in traditional classes can work at their own rate, get individual attention and counseling, and finish school. Yr Dok Zoom taught as a longterm sub at a school like that in Boise a few years back, and many of the students really did turn things around for themselves in the individualized environment. (Your editrix, meanwhile, didn't teach at one but instead graduated from one!) But if you turn alternative schools over to a for-profit company, take away the costly counseling and academic support, like a lower student-teacher ratio and extra tutoring, you can end up with a fine place to dump kids who might drag down overall test scores and graduation rates at the "good" schools, and once the poor students are out of sight, it's a lot easier to forget them. Hey, presto! Accountability! The tragedy here is that a tool which was supposed to help weaker students can so easily be used to simply make them vanish:

“They create little islands of segregation,” Fedders said. “If they aren’t doing what they’re supposed to do, it’s unclear why we have them at all.”

Oh, and here's another neat trick the ProPublica report exposes: Even though some of the for-profit charters run by ALS have on-time graduation rates -- that's kids who finish high school within four years -- in the single digits, and lots of their students never finish high school at all, the alternative charters miraculously avoid the big black eye of a high dropout rate, thanks to a bit of bureaucratic sleight of hand:

The charters exploit a loophole in state regulations: By coding hundreds of students who leave as withdrawing to enter adult education, such as GED classes, Sunshine claims virtually no dropouts. State rules don’t label withdrawals for that reason as dropping out. But ALS officials cannot say where Sunshine students actually went – or if they even took GED classes at all.

Between its opening in 2012 and the end of the 2015 school year, Sunshine High coded 1,230 withdrawals as "leaving for adult education," and the same pattern held at other charters run by ALS. In fact, statewide in Florida, "ALS ran seven of the 10 high schools statewide with the most withdrawals to adult education in 2015. Sunshine ranked first." Those are some accelerated learning solutions, all right! Now, some of those students really may have transferred to GED programs, but there's little reason to think many actually did. No requirement to track them! Now, if all those supposed withdrawals to adult education had actually been counted as dropouts, the statewide dropout rate would be 5 percent higher. The dropout rate for Orange County, where Olympia and Sunshine are located, would have jumped by 80 percent. That's a pretty neat educational miracle, huh?

At the same time it was shunting off low achievers and reclassifying kids who left school, the Orange County Public School District actually managed to win itself a major award for educational achievement. Needless to say, the school district doesn't think ProPublica is drawing the right conclusions at all, because Orange County cares deeply about all students, and even sent a written statement to say so:

In a written statement, district officials disputed that the transfers helped elevate the school system’s standing under state accountability rules. Students who quit to pursue adult education do count against the district’s overall graduation rate, even though they aren’t labeled as dropouts, they said. They did not respond to questions about whether transfers to Sunshine and other alternative charters have inflated the graduation rates of traditional schools like Olympia.

“Any national or state recognition the district has received,” the statement said, “is the direct result of our parents, students, teachers, and school administrators working hard.”

So please feel free to dismiss ProPublica's reporting as fake news. The president of Accelerated Learning Solutions, Angela Whitford-Narine, seems almost refreshingly candid by comparison, acknowledging that the average student in ALS alternative charters starts about two years behind grade level and that the company faces challenges. But she insists they're getting the hang of this, kind of:

“I can’t even begin to say we have this all figured out,” she said while giving ProPublica a tour of Aloma High, another charter school the company runs in Orange County. “But every day we get better at it.”

Part of the problem, says Thiago Mello, a 20-year-old who spent a year at Sunshine High and left without graduating, is that whole notion of letting students "learn at their own pace," which sounds nice but isn't very effective without the individual support and attention to help kids improve that pace. He says after he was encouraged to transfer from Olympia to Sunshine, he was left to "sit down and listen to music the whole time," and never learned more effective study habits:

“You go in there with bad habits and you’re already going ‘at your own pace,’” said Mello, who graduated from a regular high school in Texas and now works as a mechanic in a suburb of Dallas. “It doesn’t work like it’s intended to work.”

You'll want to read the whole infuriating ProPublica report, published in cooperation with the USA Today Network. While the schools in Orange County, Florida, are used to illustrate how all this works, it's a nationwide problem; ProPublica found at least 83 school districts naionwide where "regular schools increased their graduation rates by at least one percentage point from 2010 to 2014 while sending more students into alternative education." The piece notes that a 2007 California legislative report condemned the practice of schools dumping weaker students into charters; the state is now reviewing standard for charter schools. In Louisiana, the practice has led to litigation that's still moving forward; lawyers for students complaining of discrimination found that transfers to charters increased right before annual testing periods. And in Pennsylvania, a neat accounting trick allows low-performing students' test scores to effectively vanish once they transfer to a charter -- the low scores no longer count against their old schools' overall performance. Isn't that creative?

So hooray for No Child Left Behind and other "accountability" systems! They may have improved education in some places, but in others, they've mostly inspired creative ways to reshuffle students who might bring down test scores, resulting in what looks like achievement gains. And if the numbers show an improvement, then the schools must be improving, right? Also, privately run charters for low-achieving students are a hugely profitable part of the education business, especially when they can be run with lots of computers and not too many teachers. In states where charter schools are freed from the tyranny of government regulations, they can operate with fine profits without having to waste too many resources on actually teaching kids. And now, with private charter school and voucher maven Betsy DeVos as secretary of Education, we can look forward to even more of such schools running on the public dime.

In conclusion, low-achieving kids have always been disposable. But at least now we've found a way to make giving up on them profitable while boosting the prestige of decent middle-class schools for white kids, and that's how we'll Make America Great Again, the end.

Yr Wonkette is ad-free and supported by its readers. No vouchers for us! Please help us keep raising your blood pressure and give generously!