Oh, Shit! He's Really Going To Do It! Everybody PANIC! 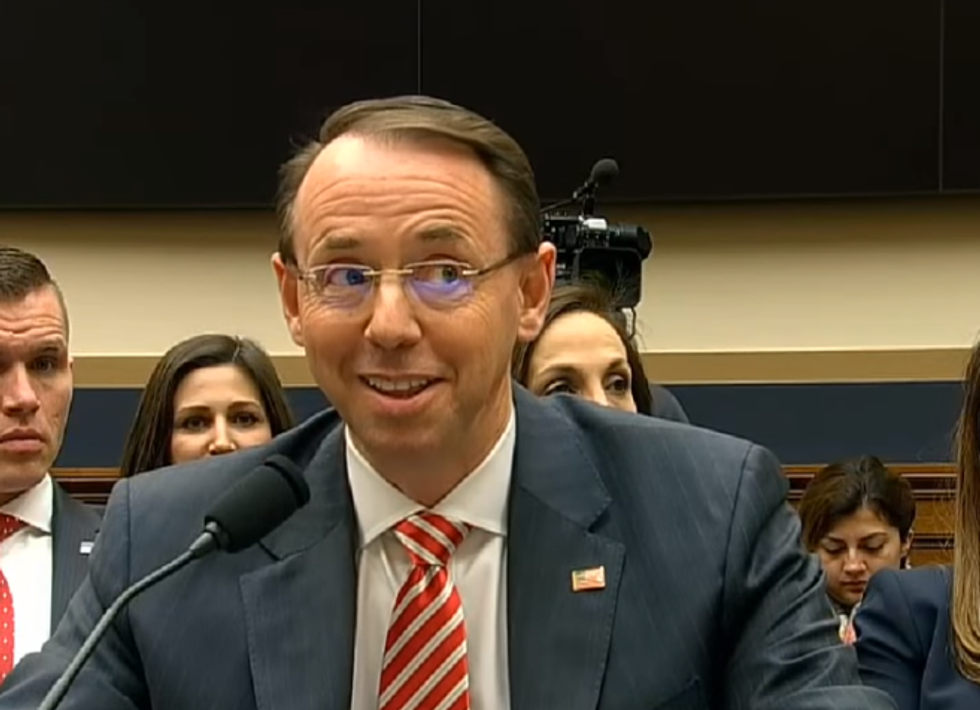 You didn't march for Comey, so now you gotta march for this guy! TAKE YOUR LUMPS, KIDS.

Got your sunscreen and water bottles ready? Or your down parka and warm beanie? Because it looks like it's just about GO TIME! Donald Trump is losing his shit over the raid on Michael Cohen's office and talking publicly about firing Mueller. The Russia investigation is inching ever closer to the White House, and Trump thinks he's in a fight to the death with Robert Mueller. And he's probably right! So lace up your sneakers, 'cause it's almost time to hit the streets.

LIKE WE SHOULD HAVE DONE WHEN HE FIRED COMEY!

For a Guy Whose Catchphrase Is "You're Fired," He Pretty Much Sucks At It

Remember that time way back last June, or "123 years ago," when Trump told White House Counsel Don McGahn to order Deputy AG Rod Rosenstein to You're Fired Robert Mueller? And McGahn said, "Do it yourself, dude," knowing full well that the old man was too much of a wuss? Well, looks like it happened again in December. Would that be a pattern of attempting to obstruct justice? MAYBE!

In early December, President Trump, furious over news reports about a new round of subpoenas from the office of the special counsel, Robert S. Mueller III, told advisers in no uncertain terms that Mr. Mueller’s investigation had to be shut down.

Someone told the old fool that Mueller was subpoenaing records of his loans from Deutsche Bank, and he only calmed down when he realized it was just Jared Kushner, his son-in-law, under investigation. And it was the US Attorney in Brooklyn doing the probing, not Mueller's guys. From which we learn:

SUCH A WUSS! White House staff know he's a-skeered of Mueller and will only fire him if McGahn agrees to do it, so they just park him in front of the teevee and let him rant.

The venting has usually been dismissed by his advisers, many of whom insist they have come to see the statements less as direct orders than as simply how the president talks, and that he often does not follow up on his outbursts.

One former adviser said that people had become conditioned to wait until Mr. Trump had raised an issue at least three times before acting on it.

But Don't Cancel That Panic Attack Yet!

Last night, CNN, the Wall Street Journal, and the Times all reported that Trump has gone full ragestroke over the Cohen raid and wants to murder the Russia investigation FOR REAL THIS TIME. Spokesliar Sarah Huckabee Sanders said yesterday that Trump "certainly believes he has the power" to fire Mueller. And Buzzfeed reports the current White House mood as "Jesus take the wheel."

Current Wonkette Seekrit Chatcave mood is, "Holy shit, he's going to fire Deputy AG Rosenstein at Friday Newsdump O'Clock!" Because, despite whatever nonsense he "believes," firing Mueller would be a heavy lift. Besides which, several senators are clearing their throats uncomfortably at the prospect of having to face their constituents after having once again failed to do a goddamn thing about the president's blatant lawbreaking and self-dealing. They don't mind if he murders the Russia investigation, but they'd really appreciate it if he waited until dark and stuck a shiv in it, rather than staging a public execution.

Which leads to this guy.

Yeah, not as scary as Mueller.

Whom Trump can fire any time he wants, replacing him with some toady who'll happily strangle the Mueller investigation and bury the evidence. And here's what the president said Monday, when a reporter asked if he was going to fire Mueller.

And many people have said, “You should fire [Mueller.]” Again, they found nothing. And in finding nothing, that’s a big statement. If you know the person who’s in charge of the investigation, you know about that. Deputy Rosenstein — Rod Rosenstein — he wrote the letter, very critical, of Comey.

But he signed — as you know, he also signed the FISA warrant. So Rod Rosenstein, who’s in charge of this, signed a FISA warrant, and he also signed a letter that was essentially saying to fire James Comey. And he was right about that. He was absolutely right.

Good luck, Rod! Remember that letter you dummied up saying Comey had to go because he was mean to Hillary? Karma's a bitch. And man, does she have lousy timing!

Okay, Wonkers! BE READY. See you out there!

UPDATE: Here's the link to MoveOn.org's protest coordination in your area, which we inexplicably left out earlier. OOOPS!

Please click here to put money in the Wonkette Granola Bars and SPF 9000 fund! Shit's bout to get real!