OK But Seriously, WHERE THE FUCK IS MELANIA? 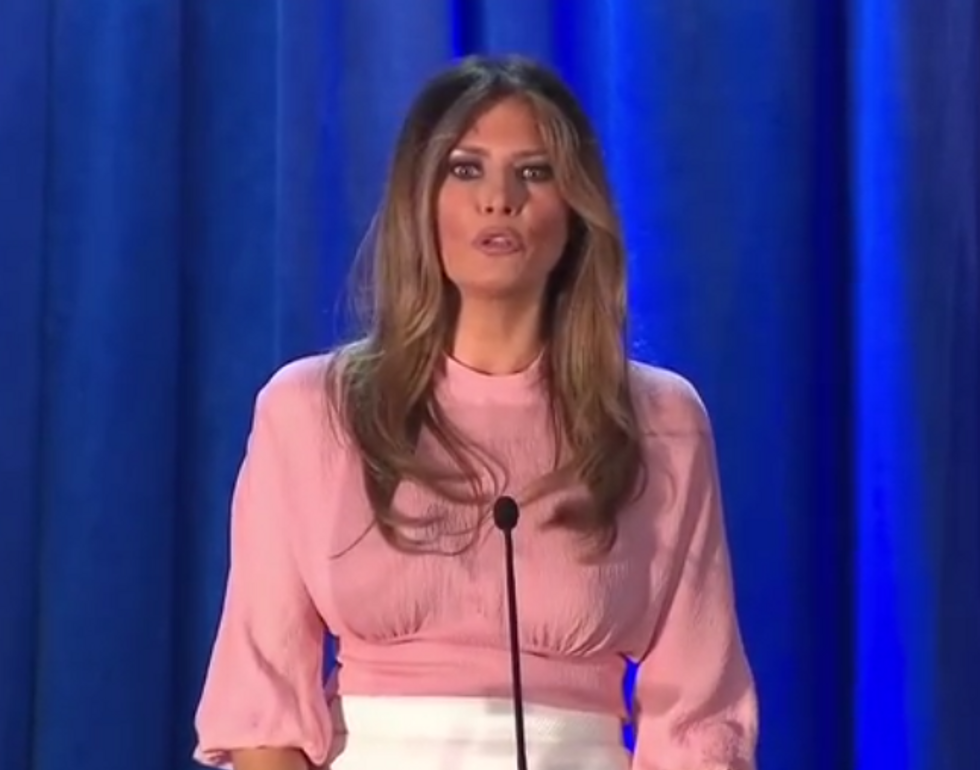 Saturday night, we were walking down 7th Avenue in Chelsea with a friend and, encountering a MASSIVE situation where a cross street was being dug up in the middle of the night, we and our friend almost simultaneously made the hilarious joke that Trump sure was going to great lengths (allegedly!) to hide the body of his wife Melania, assuming the reason we haven't seen her in over three weeks is that the president of the United States mighta coulda had his beloved bride offed. (HAHA! JOKE! Not to be taken literally like well-known newspaper The Onion, Michael Cohen! The first lady has not been murdered! WE THINK!)

Seriously though, where the fuck is Melania? "She's doing great. She's looking at us right there!" The reporters turned to look where the president was pointing, but there was no Melania. Perhaps she is currently invisible. Perhaps she is a shape-shifter. Perhaps Melania is one of those things that really feels like it exists, if you believe in Melania with all your heart. Perhaps she is like Christ in that regard.

Or perhaps the entire White House is lying right now, saying Melania (or "Melanie" as the president likes to call her) went into the "hospital" for a "kidney procedure" and proceeded to stay there for "five days," which is weird because said "kidney procedure" is usually an over-nighter at the most, and now she's on week three of her recovery at home. Maybe the truth is that she went in for the kidney procedure, then found the nearest sexxxy man nurse and said, "Gabriel! Please to give me piggyback ride back to New York City so I never have to see my husband President Shitwad ever again! It will be WEEKS before he even notices I am not there!"

We dunno, but there sure as hell is a rumor that Melania has indeed noped out of this whole First Lady situation and peaced out back to NYC, where she fucking tried to stay in the first place after Donald was vaguely "elected" president:

Friend who just retired from Secret Service has confirmed that Melania Trump has moved back to New York for the "foreseeable future" and will now cost us millions in additional protection daily.

He said that the agents assigned to her detail have been told to prepare.

HMMMMMMM! Is that horseshit? Well, that person follows Wonkette on Twitter (as all patriotic Americans should), so he can't be all wrong!

OK, we are kidding, that is not the proper journalistic way to fact-check things. But it's a fun rumor!

According to internet website "Hollywood Life" (no, we do not know if it is bullshit or not, so please don't think we're Louise Mensch-ing at you right now), a "source" says Melania has indeed headed to NYC for some Me Time, so she can figure out how to Be Best again. Also, Donald Trump is a shit and she HAAAAAAATE him. According to "source," Melania wants to fast-forward to the end of Trump's presidency (her mouth to God's ears, allegedly!) so her life can be "normal" again. Does she want Donald Trump to be part of that "normal"? We don't know, but if she has a lick of sense, the answer is FUCK NO.

Twitter person has more rumors to say to us:

I'm told that two secret service vehicles with Melania Trump were seen at the Waldorf Hotel in NYC.

HMMMMMMMMM! Did the vehicles bring Barron? Were they creating a barrier so nobody would see Melania's rumored longtime sidepeen security guard whisk himself into the Waldorf, shedding security guard clothing as he approached the bank of elevators that would reunite him with his beloved? AND ARE YOUR TAXPAYER DOLLARS PAYING FOR THIS SECRET SERVICE BEHAVIOR?

We just don't know, but we do know what the 2018 midterm election season needs, and it is a high-profile and gross celebrity/presidential divorce, so FILE THE PAPERS, MELANIA! WE GOT YOUR BACK!

Just kidding, Melania is #complicit, but we'll at least drink shots of the finest Fireball in celebration if she suddenly decides to lose several hundred pounds of dead weight, all of which is named "Donald."