OK Everyone, You Punished Kathy Griffin Real Good, Now Shut The Fuck Up 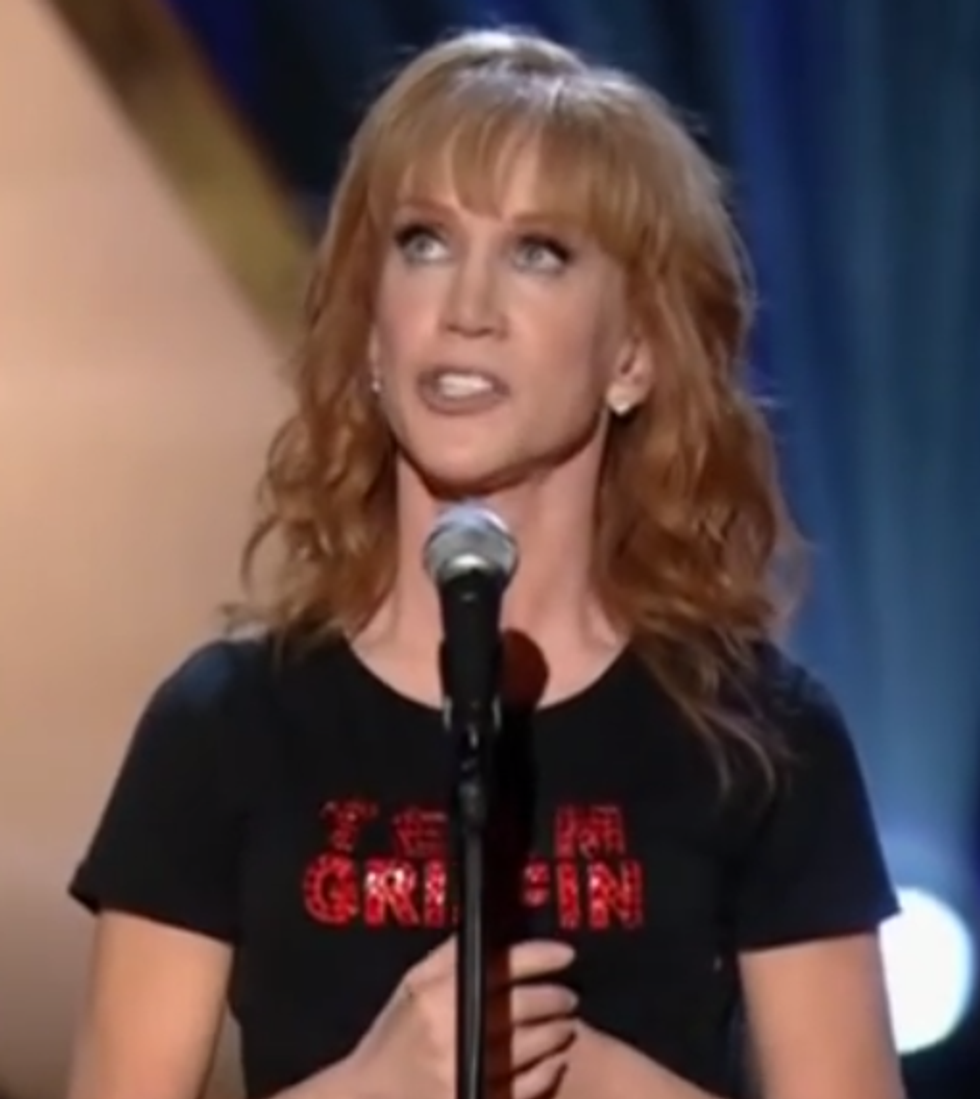 Oh boy howdy, a celebrity did a thing and now there is SCANDAL! If you were blissfully unaware, mean liberal comedienne lady Kathy Griffin (whom we like a lot) did a photo shoot with an artist named Tyler Shields, and in the picture she is holding what looks like the styrofoam severed head of Donald Trump. WHOA!

Thus beginnedeth the OUTRAGE and POUTRAGE! There was so much of it, from all corners, that CNN has fired Griffin from its New Year's Eve broadcast and Griffin has lost an ad campaign as a result. Why is Kathy Griffin encouraging little children to murder the president and walk around with his head while Tyler Shields takes pictures of it?! You've crossed a line, madam!

There was OUTRAGE! from one million Trump-loving wingnuts (no, we are not linking to them), the same people who thought it was LOL funny to email their fellow Teabaggers pictures of Barack Obama being lynched. They are also the same people who tacitly or explicitly condoned the violence Trump helped incite at his rallies, and who will find EVERY REASON to believe that if a black person is shot and killed by the police, then by god they was probably up to NO GOOD!

They fail to cry when transgender folk are murdered simply for who they are. They don't seem all that broken up about the two American heroes who were stabbed to death in Portland while trying to protect a Muslim girl and her African American friend from vicious white supremacist hatred.

But mean Kathy Griffin took a gory picture that discriminated against Donald Trump just for being the worst president in our nation's history! In related news, did you hear Beyoncé the mean black lady who sings songs and dances in the naughty style hurted some cops' feelings a while back with a music video, and then also hurted lots of white people's feelings when she put a bunch of scary looking black people in her Super Bowl routine? Beyoncé the mean lady did those things. Also too something something Madonna.

We have been troubled to see the sheer number of liberals jumping up and down and ALL CAPS DISAVOWING Kathy Griffin's photo shoot, who feel the need to breathlessly reassure everyone that #NotAllLiberals condone red-headed comediennes cutting off Donald Trump's head and carrying it around. The fuck you say? Of COURSE liberals don't condone that. Kathy Griffin doesn't condone that. It's a fucking piece of art.

Liberals, can we remind you of something? Regardless of what you do or do not think about the Kathy Griffin thing, you don't have to fall all over yourselves to defend or condemn everything liberal celebrities do. Wingnuts THRIVE on your self-flagellation, and you are damned if you don't and damned if you do.

To be clear, we're not saying don't express your opinion. Please do! America is a free speech zone (ALL OF IT), and we don't want anybody going into their trigger warning safe spaces over this! Kathy Griffin and Tyler Shields did a thing in an attempt to be artistic and funny and make a statement. Whether or not you think their joke/art landed, you are obviously entitled to your thoughts! Debate the merits of their art vigorously and honestly. (Click here for Shields's thoughts, if you're curious.)

Just don't take the bait and feel like you have to condemn OR justify Kathy Griffin to fucking asshole conservatives who, by their long record of inaction (or outright support) when it comes to ACTUAL VIOLENCE THAT HURTS ACTUAL VULNERABLE POPULATIONS OF AMERICANS, have proven time and time again that they don't fucking deserve a response on this from any of us.

For what it's worth, Wonkette got the joke Kathy Griffin and Tyler Shields were probably at least partially inspired by. Renaissance artist Cristofano Allori painted his depiction of the deuterocanonical scene from the Book of Judith in 1613, of Jewish heroine Judith holding the severed head of Holofernes. Allori was far from the only artist to paint the gruesome scene.

In the story, Judith saved her Israelite town of Bethulia when she went to the enemy camp of the general Holofernes, one of Nebuchadnezzar's boys, who was trying to invade and conquer. Because Judith was very sexxxy, she used her feminine lady wiles to get into Holofernes's tent and give him a big ol' boner, but UH OH, plot twist, old Holofernes was D-R-U-N-K, so she pivoted away from the sexxxytime and figured she'd cut his head off and take it back to her town. Oh well, such is Bible War.

Maybe Griffin and Shields were riffing off Donald Trump's grotesque treatment of women, and doing a 21st century version, where women conquer the Pussygrabber Trump.

Wonkette's fashion department actually made a t-shirt during the 2016 election (SUPPLIES STILL AVAILABLE!), inspired by the same story and photo-shopped onto the same painting. However, Wonkette avoided Kathy Griffin's mistake, because we remembered to put "WITH VOTES" below the picture of our "Judith" holding the head of "Holofernes." (For those not in the know, the Official Wonkette Stylebook states that adding "WITH VOTES" after a violence word means you aren't saying the violence word literally, but in a more American electoral democracy way, like, you know, WITH VOTES. Click here for 74,869,723 examples of Wonkette's usage of "WITH VOTES." And where did "with votes" originally come from? Some gunhumper explaining it was okay to talk about cutting off Nobummer's head, because they were CLEARLY talking about doing it METEORophorically ... WITH VOTES!)

And Wonkette got yelled at for that t-shirt too, by idiots who didn't understand OUR joke, which was probably a bit tacky, if only for the way it abused Renaissance art.

Moral of story, Kathy Griffin: You have to say "WITH VOTES." And to everyone else: CAN THIS PLZ BE OVER NOW? THX.

Oh also this is your open thread, so if you want to talk, you know, talk.