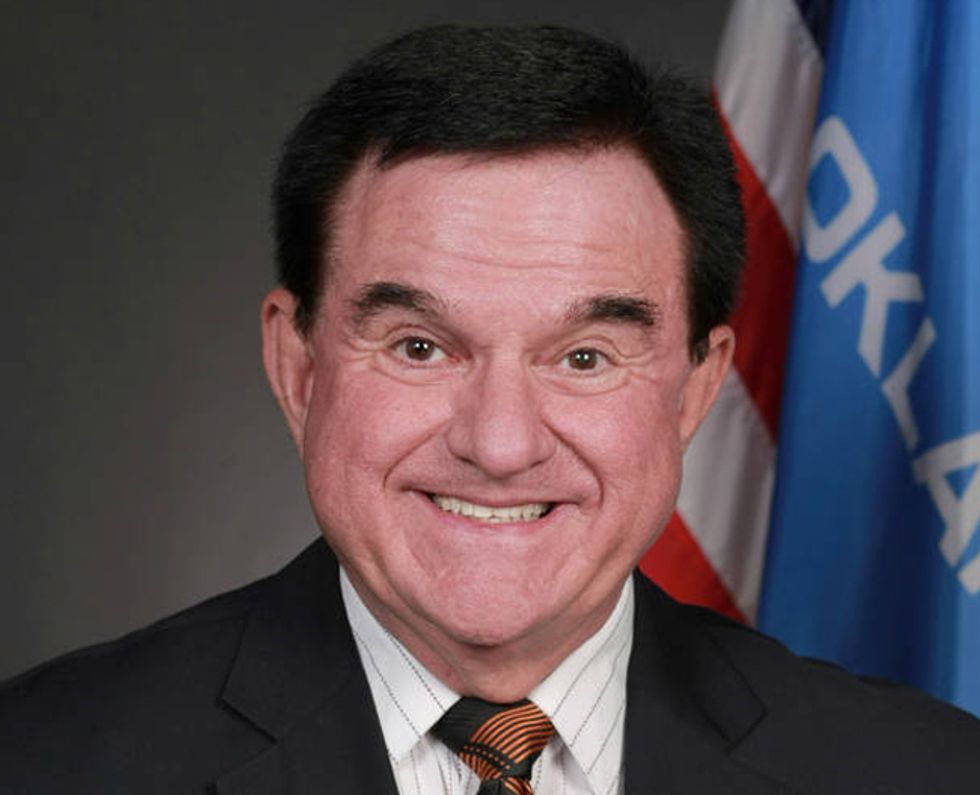 Strong challenger to Betsy DeVos in the Fake Smile Olympics

Oklahoma has always resented that Texas won Molly Ivins's title as the National Laboratory For Bad Government, so from time to time the Oklahoma Lege will toss up some spectacularly bad idea like banning sharia law or keeping fetus parts out of food or banning abortion over and over again. So it shouldn't come as any surprise that Republican state Rep. Mike Ritze has offered a brilliant, if slightly unconstitutional, plan to help close the state's $900 million budget gap: Just find all of the 82,000 schoolchildren in the state who don't speak English, turn them over to Immigration and Customs Enforcement, and then they and their families can be deported, or at the very least, they can be kicked out of school.

State Rep. Ritze told CBS affiliate KWTVthe idea was part of the 22-member Republican Platform Caucus's plan to find up to a billion dollars in budget savings. In there among ideas about eliminating some tax credits and maybe saving as much as $39 million by eliminating all "promotional swag" given out by state agencies, the caucus had this humdinger of a plan, as Ritze explained:

The caucus said there are 82,000 non-English speaking students in the state.

“Identify them and then turn them over to ICE to see if they truly are citizens, and do we really have to educate non-citizens?” Ritze asked.

The caucus thinks that could save $60 million.

Poor Dumb Oklahoma Humiliates Itself Again, Sets It In Stone

The killjoys at the Washington Post point out that refusing to educate kids because they're not citizens is actually a tiny bit on the unconstitutional side, since the Supreme Court ruled in its 1982 Plyler v. Doe decision that states can't deny education on the basis of immigration status. Hell, that seldom deters Oklahoma from all sorts of nifty bills, like that proposal to outlaw all abortions we mentioned. Sometimes the Oklahoma Lege even passes the things, like the Sharia Law ban or placing a big ol' Ten Commandments monument on the statehouse lawn, and then it spends a bunch of money losing lawsuits as a result. And hey, here's a coincidence -- Mike Ritze headed up the effort to install that Ten Commandments monument, which managed to misspell "Sabbath" as "Sabbeth" the first time out. Nevar forget!

The Associated Press tried to get details from Ritze on how all this would work -- would the state actually round up the kids or just turn their names over to ICE? -- but he is suddenly not answering his phone.

By the time Ritze's comments started getting national attention, other Republicans, even members of the Platform Caucus, were wisely backing away from their crazy colleague. Chuck Strohm, the co-chair of the caucus, told the AP Ritze wasn't accurately describing the group's discussions, and that the citizenship test appeared to be all Ritze's idea:

“On this subject of deporting students, that is not a position that we support” [...]

Strohm said the caucus discussed the additional financial burden that students who require additional English instruction create, but never the idea of reporting students to ICE.

“This caught many of us by surprise, because that’s not the direction that we talked about.”

Well that's a heck of a relief! It sounds like the real caucus proposal wasn't to turn the kids over to La Migra, but simply to save $60 million by not teaching the little boogers English or providing them other second-language support. Now there's a fine example of Oklahoma moderation! Sadly, if that's what they had in mind, it's illegal, too: The feds require schools to help kids become proficient in English, and even to communicate with parents in their home language. (Maybe we shouldn't say that too loud so Trump won't go after those regulations.)

In an update to the KWTV story posted Friday, Oklahoma Gov. Mary Fallin said the idea of examining non-English speaking students' citizenship status was "not on the table for me. I'll just take that off the table right now. Real simple."

Yr Wonket would now like to congratulate ourselves on getting through this whole piece without once questioning the English skills of Oklahoma legislators. We feel good about ourselves, yes we do.

Please click the "Donate" clicky below so Yr Wonkette can continue our tradition of mocking doofuses in state legislatures across our great land.