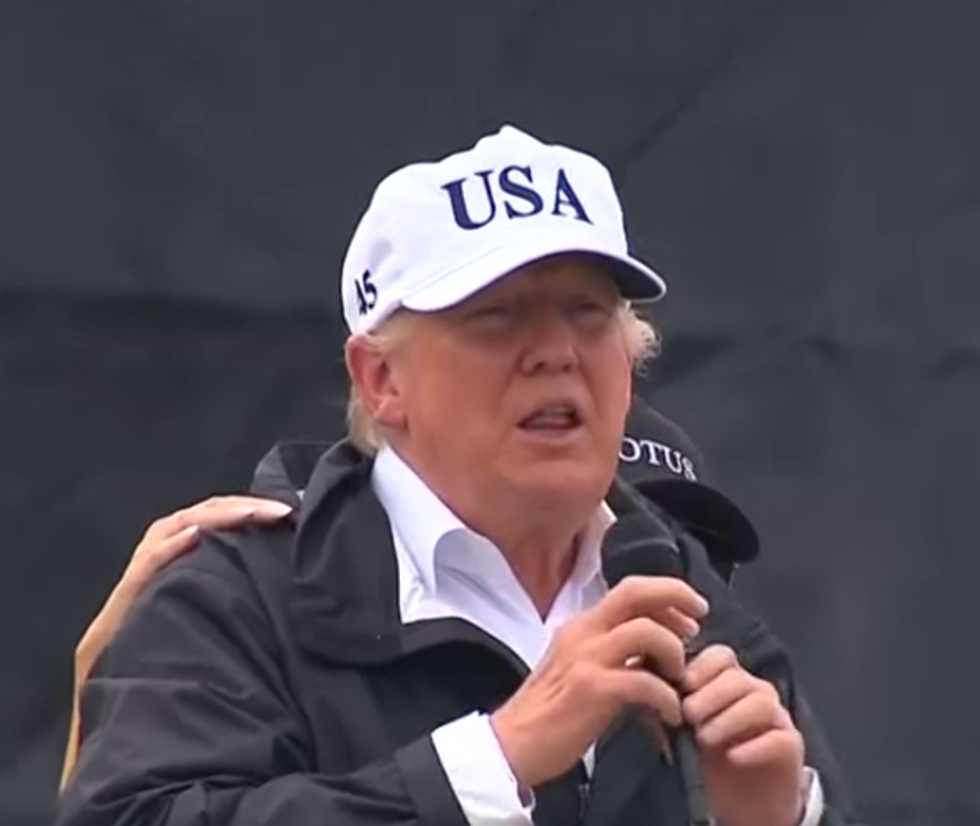 Granted, there might be some sliver of Trump's shrinking base that will get their first hard-on in years over screaming "LOCK HER UP!" about their favorite FOOOOOOBAAAWWWWW players, but let's just say even your moron Fox News-watching uncle might draw a line in the sand if the president tries to take away LITERALLY THE ONLY THING HE ACTUALLY HAS TO LIVE FOR, which is NFL football.

The first reply to Acosta's tweet sums up the stupidity of Trump's latest super bowl of distraction and deflection:

Trump's going to win this football fight so much, he's going to get sick of winning!

In that spirit, here are a few developments in Trump's yooge brilliant best war against the very large men whose hands are big enough to hold on to the pigskin:

Monday morning, we noted that Trump had been tweetering about how at least NASCAR people (white hicks who go on dates with their sisters but never get to second base, SADFACE) were being nice to the American flag and the national anthem, because they know how to show the proper respect to King Pussy-Grabber of the Pussy-Grabbing Pussies. In response, extremely famous NASCAR star Dale Earnhardt Jr. took a speedy left turn directly into the president's nutsack:

Speaking of balls, Trump's boy Tom Brady has now personally spoken out against Trump's behavior. Before, he was just locking arms and keeping mostly quiet, but this, while still kind of milquetoast, is still a rebuke:

Brady tells Boston's WEEI-FM that he "certainly" disagrees with Trump's comment that NFL owners should fire any player who refuses to stand for the anthem.

One more thing, and it is, as always, about Trump being a fucking know-nothing idiot. After Trump was done Hooked On Phonics-ing his way through his early morning Twitter rage shits on Monday, he retweeted this thing about Pat Tillman, the former Arizona Cardinals football player who was killed in Afghanistan in 2004:

To @jayMAGA45 (one of Trump's Twitter followers who doesn't seem to be a Russian bot, strangely enough) and @realDonaldTrump, we must award ONE MILLION Jane, You Ignorant Sluts. Pat Tillman was killed by FRIENDLY FIRE (which is not actually "friendly") and, as New York Magazine reminds us, by the time he was killed, Tillman was really not the biggest fan of Bush's little adventure in Iraq. Indeed, he referred to the Iraq war as "so fucking illegal." (This was back when Trump supported the Iraq war, even though he lies about that now.)

In the end, Tillman’s story became less about unthinking, reflexive jingoism and more about the uncomfortable truth often lurking behind bumper-sticker slogans. In other words, Tillman is actually a perfect poster boy for our era — for exactly the opposite reason President Trump thinks.

Even better, Think Progress flags a Facebook post from Marie Tillman, Pat's widow, back when Trump came out with his first soon-to-fail Muslim ban:

We'd say Trump should read a book before he tries to use Pat Tillman for his shithead propaganda again, but LOLOL we're just not sure "reading a book" is in Trump's skill set.

UPDATE: OK, this happened just as we were publishing this post, but we felt we HAD to add it. LeBron James, who most recently hilariously called Trump "U BUM," spoke out again, and delivered the following AMAZING QUOTE:

LeBron James on Trump: "The people run this country, not one individual. And damn sure not him." pic.twitter.com/oynHzMv82y