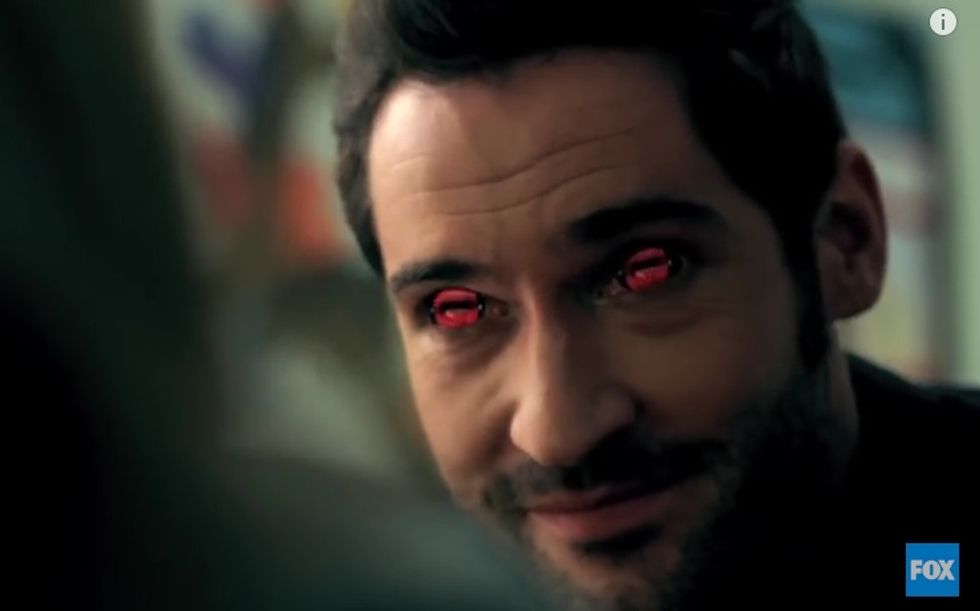 Oh hey, look, One Million Moms, aka Seventeen Angry Dipsticks, is back! They're still mad about Fox's TV show "Lucifer," like they were before, but now they have a new target: Olive Garden, which sponsors the show.

If you're not familiar with "Lucifer," it's based on a Neil Gaiman comic about the devil getting bored and hanging out in Los Angeles, presumably because LA is the closest thing on Earth to his home territory (just kidding, that's Oklahoma). He goes on adventures, helps the cops (OK, that part we actually totally buy), and just generally has a grand old time. But since Lucifer himself is apparently bad 'n evil 'n stuff (who knew?!), One Million Moms is VERY ANGRY Olive Garden, home of the Never-Ending Diabeetus Bowl, sponsors the show, and those ladies are determined to lay a hurtin' on the OG on social media.

The premiere included graphic acts of violence, a nightclub featuring scantily-clad women, and a demon. The message of the show is clear. Lucifer is just misunderstood. He doesn't want to be a bad guy, it's God who is forcing him to play that role.

Contact Olive Garden, who sponsored the spiritually dangerous program "Lucifer" and paid corporate dollars to promote their restaurants in association with the content of the program.

And boy howdy, they are doing some contacting! The Olive Garden Facebook page is just a treasure right now. If you're willing to sift through the dozens of comments left by heartwrenchingly lonely souls who feel the need to respond with "Yum!" or "Salad!" to every post (sometimes six times in a row!), you'll find gems like these:

I truly enjoy your restaurant and the food you serve. I recently saw the adds for the 'lighter Italian' meals and was planning on making a visit soon, but I won't be able to do that. It has been brought tomy attention that Olive Garden is a sponsor of the new FOX show 'Lucifer.

We too were planning on making a visit soon, until a recent revelation convinced us to change our plans. In our case, it was finding out Olive Garden is fucking disgusting.

In May of 1607, the settlers landed in Jamestown, Va. Not much more than an hour later, they gave thanks to God. Christianity has done wonderful things for our country and for the 150 years before our country became a country. The show 'Lucifer' does not reflect the truth about Christianity. Please do not sponsor shows that do not respect the faith and foundation of our country. Please donot sponsor 'Lucifer.'

"A few hours after that, they started handing smallpox blankets out to the natives, just like Jesus surely intended."

I'm a Christian who was so up set at seeing a wonderful company like yours sponsoring a terrible program like Lucifer. As for my family my church and anyone that will listen we will stop eating at your restaurants until you stop siding with Satan and stand with GOD!! Please stop your support RIGHT NOW!!!!!!!!!!

It's a well-known fact that the Eleventh Commandment, known only to evangelicals, is Thou Shalt Not Use Commas.

OLIVE GARDEN...WE ARE BOYCOTTING YOU UNTIL YOU STOP SPONSORING THE spiritually dangerous program "Lucifer" ON THE FOX NETWORK...I HAVE NOTIFIED MANY PEOPLE ON FACEBOOK ABOUT YOUR DECISION...

"Lucifer" better watch out, because this dude has NOTIFIED MANY PEOPLE ON FACEBOOK.

[contextly_sidebar id="iuIUUno0P9Oc9NcBMTjZHJSNMZBKjsqg"]Look, guys, this is a Darden Restaurants joint we're talking about: Olive Garden and its parent company are responsible for WAY worse shit than sponsoring some TV show about how the devil isn't really that bad a dude. Like their menu. Also for directly sponsoring human slavery.

Not all the Facebook posts were angry, though; at least one saw the humor in the situation: